“Net Zero” was supposed to be a straightforward idea — one that could be achieved with a healthy dose of spreadsheet politics, shifting a few numbers from one Excel column to another. It made sense, then, when the UN delegated the job of devising it to Mark Carney, former governor of the Bank of England. And it seemed perfectly reasonable when some of the world’s biggest polluters — China, the United States, the European Union — announced a strict timeline for when they aim to be carbon neutral.

In reality, however, these announcements have turned out to be little more than PR stunts. Take the case of Brookfield, a Canadian asset manager that employs Carney as its vice chair. Last year, it announced that it was “net zero across its $575 billion asset portfolio”, only for it to be revealed that the company had in fact invested billions of dollars in fossil fuel projects, including a coal port and an oil sands pipeline. Following public outcry, Carney issued a statement in which he admitted that he was talking of “avoided emissions” — not overall emissions. And this from the man who is in charge of leading the world to Net Zero…

Carney’s back-pedalling is revealing of how companies are using “creative” interpretations of Net Zero to greenwash their image while continuing to make billions from fossil fuels. The truth is that governments haven’t fared much better. In recent years, several emission-reducing policies have been rolled out — mainly market-based emissions-trading systems, carbon taxes and subsidies for renewables. Meanwhile, huge sums of money have been poured into experimental technologies such as carbon capture and storage (CCS), with hitherto very poor results. Yet fossil fuels still account for around 80% of the world’s energy. Newly industrialised economies, first and foremost China and India, today account for 35% of global emissions. On the other hand, developed countries have seen their emissions decline.

That said, one thing is clear — while the West is clearly responsible for the overwhelming majority of past emissions, future emissions are going to be driven primarily by newly emerging economies. Regardless of what we do in the West, the billions of people who still live in poverty in countries such as India, not to mention those in Africa, and who legitimately aspire to the comforts of industrialisation, will drive a colossal surge in energy demand in the coming years. Projected worldwide consumption of all types of energy 30 years from now is about 50% higher than today, most of it in poorer countries.

This usually invites two types of response: the Malthusian-pessimist kind, which claims that this is intrinsically unsustainable, and that the world can’t afford the massive increase in fossil fuels that the widespread development of the Global South would inevitably entail; and the naïve-environmentalist kind, which contends that developing countries can rely on solar panels and wind turbines to sustainably grow their way out of poverty. Both of these responses share one thing: they’re wrong.

What’s interesting, however, is how these two approaches overlap when it comes to Net-Zero polices in the West. Climate ideology has become a dangerous mix of end-of-days apocalypticism, with thousands of young Westerners now suffering from “climate anxiety”; of individual scapegoating, where ordinary citizens who bear little responsibility for systemic problems are guilt-tripped into thinking that they bear the burden for potential ecological collapse; and of eco-authoritarian hubris, based on the notion that the West needs to drastically accelerate its process of decarbonisation. A perfect example of the latter is Dutch prime minister Mark Rutte’s recent proposal to drastically cut back nitrogen emissions (70-80%) in the country’s farming sector. The consequence of such a reduction would be to close down around 30-50% of the Dutch livestock and agricultural industry; according to the government, 11,200 farms will have to close and another 17,600 farmers will have to significantly reduce their livestock.

Understandably, the decision has sparked massive protests among those who see this is part of a wider plan by green elites to “reset” the international food system. They point out how Rutte himself is a golden boy and an Agenda Contributor of the World Economic Forum, among the most vehement proponents of Net Zero. According to the protesting farmers, one of the underlying reasons for the move is to squeeze small farmers out of the market, thus allowing them to be bought out by multinational agribusiness giants. To make things worse, the Netherlands is Europe’s largest exporter of meat and the second-largest agricultural exporter in the world, just behind the United States, meaning the government’s plan would cause food exports to collapse at a time when the world is already facing a global food and resource shortage — a disaster caused by the same global elites who are now peddling Net Zero.

This isn’t just happening in the Netherlands. In July, thousands of protesters stormed Sri Lanka’s presidential palace and forced the president and prime minister to resign. As in the Netherlands, the protests were sparked by the government’s decision to ban fertilisers and pesticides in favour of organic, climate-friendly alternatives — a decision that devastated millions of the country’s farmers and caused an artificial food shortage that plunged nearly two million Sri Lankans into poverty, and turned the country from rice exporter to importer. The defenestrated prime minister, Ranil Wickremesinghe, was also, like Rutte, a devoted member and Agenda Contributor of the WEF; in 2018, he published an article on the organisation’s website titled: “This is How I Will Make My Country Rich by 2025”. (Following the protests, the WEF swiftly removed the article from its website.)

In light of all this, it’s easy to see why a growing number of people view Net Zero as either a case study in utter incompetence or, even more troublingly, as the latest example of “crisis capitalism”, whereby crises are exploited (and in some cases engineered) by ruling elites to push through restructurings of the capitalist system — usually by concentrating capital and power in the hands of fewer and fewer people in a manner that would likely face unsurmountable popular opposition in “normal” times. We saw it happen with the financial crisis, with the pandemic, with the war in Ukraine. Now it is being repeated with the climate crisis. This is not to say that the climate and environmental crises are not real — they very much are. What we need to do is retain the capacity to separate the reality of a problem from the establishment’s political use of the latter. There are several good reasons for decarbonising our economies; climate change is just one of them — and arguably not even the most important. Fossil fuels are incredibly polluting, causing millions of deaths every year. They also, as we are now learning, make us dependent on a handful of countries that actually produce most of the world’s fossil fuels. So, moving beyond fossil fuels is fundamental, even simply from a geopolitical standpoint — and we mustn’t let the disastrous decisions currently being taken by globalist elites in the name of decarbonisation distract us from that.

There are also very good reasons to doubt that decarbonisation is really the elites’ end goal. For all the talk of Net Zero, a recent study of $634 billion in energy-sector subsidies in 2020 found that around 70% went to fossil fuels and only 20% went to renewable power generation. In 2021, support for fossil fuels actually increased compared to previous years. Things have become even worse since the start of the war in Ukraine, as several European countries have turned to coal and even fracking in a desperate attempt to replace Russian gas supplies.

All this casts serious shadows over elites’ claims of having decarbonisation at heart. But there’s one thing that more than any other raises doubts about their good faith: the fact that while they keep coming up with increasingly fantastical solutions to CO2 emissions, they largely keep ignoring the only existing technology that can help us rapidly phase out fossil fuels once and for all — without disrupting Western societies, and without denying the rest of the world the living standards they legitimately aspire to. I’m talking, of course, about nuclear energy.

The reason nuclear energy is largely absent from the decarbonisation debate is that the latter is based on a lie: that we can generate all the world’s energy needs from renewable sources — primarily wind and solar power. This has become a mantra for much of the climate movement, but it’s a delusion. 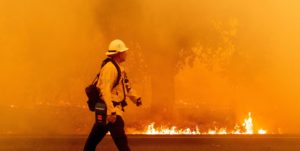 Aside from the problems arising from covering colossal tracts of land with wind turbines and solar panels (which require hugely polluting rare earth elements, most of which are in China) to meet the world’s growing energy needs, the fact is that both are intermittent and energy storage technologies don’t come close to what would be needed. Even with a high percentage of renewables, a stable, constant source of energy would still be needed — and that’s either going to be fossil fuels or nuclear energy. As James Hansen, the Nasa climate scientist who first warned the world about the dangers of climate change in the Eighties, has pointed out, nuclear is “the only viable path that has been proposed for rapid global decarbonisation”.

This, then, is the great Net Zero lie: it’s primary goal isn’t remedying the climate crisis. After all, a solution to the crisis stands right in front of us — only to be ignored by our political and financial elites. Faced with such deception, it’s hardly surprising that many are starting to question their motives; and in more and more countries, are starting to let it be known that they have had enough.