When Christopher Lasch wrote The Culture of Narcissism in 1979, well into the post-war wealth boom that turbocharged the industrial era, he argued that narcissistic tendencies develop partially as a result of industrial society. He identified phenomena as disparate as the modern school system, sport, psychotherapy, advertising and consumer culture as playing a role in the development of widespread, unchecked narcissism. But he didn’t go far enough: it was a glut of energy resources that instilled in us the belief that we could control nature as if we were gods.

For decades, our standard of living in the developed world seemingly increased without end. The improbable access to energy coupled with crony capitalism turned wealthy societies into pure consumers, swallowing anything and everything the economy could imagine and manufacture. Our system was unrivalled in history. Our inner Narcissus was unleashed.

Two major trends influenced our narcissistic tendencies in this energy-rich universe: we developed personal meaning in consumption, turning what we wear, where we eat, and where we shop into our religion. Consumption became a signal of belonging in a world breaking apart any semblance of community.

We also developed a collective philosophy of progress that told us we have won history: we had conquered all the resource and material challenges of the past. We believed that our collective wealth as a species was only going to keep growing. No wonder, then, that progressivism, in its traditional sense, became the widespread political psychology exactly as the upward slope of oil consumption looked almost exponential.

These two widespread psychological outcomes unveiled the worst of our egocentric propensities. On the one hand: we identified with what we chose to consume, an inward-looking narcissism, displaying self-worth through ostensibly corporate fandom, a religion of the self. On the other, we displayed an optimistic faith in human limitlessness.

Fusing the two together, the abundance of cheap energy lumbered the developed world with a narcissistic psychosis. You can see this in everything from the overvaluation of an individual’s salary and power as measures of success to the denigration of caring roles and familial obligation. In each case, the focus is on the individual thriving while ignoring the interdependence that makes life possible.

The EU is sleepwalking into anarchy

But look at the world today: the seemingly constant upward trajectory of humanity is faltering. On the far side of industrial development, we have begun to reach a peak — in affluence, in meaning, and now in access to resources and position. Increasingly, there is widespread social disorganisation and political dysfunction as our high-energy society reaches its material limits. Economic theorists call this the crisis of capitalism; energy analysts call it peak oil; social commentators call it the meaning crisis; Weber called it disenchantment; Marx called it alienation. Whatever we want to call it, we have fewer resources now and it is changing how we think.

According to relative deprivation theory, as individuals in a society achieve a certain level of affluence and sense of security, any lowering of that standard leads to a feeling of entitlement and a sensation of being robbed. Sociologists suggest this sense of loss can often foment social movements and result in society wide outbreaks of deviant behaviour.

But this general sense of malaise and unease has also created a widespread culture of victimhood. Similar to Lasch, who relied on the clinical diagnosis of narcissistic personality disorder to explain societal narcissism, I believe that these tendencies are manifested in borderline personality disorder, or BPD. The characteristics of BPD include a sense of paranoia, the feeling that you are on the receiving end of unfair treatment, and a sort of mental witch-hunt against the individual or group believed to be behind it.

The political factions we now see arising out of various forms of social disorder — environmental, economic, financial — demonstrate just this trend: a widespread cultural outbreak of borderline personality disorder, centring around victimhood. Just as the seemingly endless exploitation of cheap energy caused us to once see ourselves as gods, our now-dwindling resources have us seeing monsters lurking everywhere in the shadows.

Consider the class of overproduced elites, the neurotic radicals of our current era. Working on the assumption that cheap energy and growth would maintain its trajectory forever, our institutions oversaw the creation of more white-collar positions. But today, at the end of the hyper-industrial era, these positions are becoming scarce. And what follows is not just a sense of deprivation-fuelled entitlement, but also a kind of bitter in-fighting with victimhood as its currency. 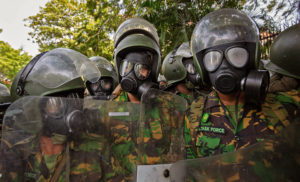 Why we need the apocalypse

Take the madness of our universities as an example. Individuals prepare their whole lives to go into academia, only to graduate into a cratering job market with nearly-impossible-to-land positions. In certain fields, PhDs work for years as low paid adjuncts or postdocs, often moving around the country with young families in the hopes of one day finally landing a tenured position. But instead of recognising the end of limitless white-collar growth as the proximate cause, frustrated would-be academics turn to those gaining the limited positions as both the enemy and the cause. In a dark psychological twist, victimhood politics have now become a means to secure a scarce position.

Similarly, those suffering from clinical BPD have been known to use their sense of victimhood as a way to control situations or achieve desired ends — such as when privileged white women pretend to be women of colour, or when activists attempt to dethrone existing “privileged” elites under the pretences of racism, sexism or some other victimisation of underprivileged groups.

But while this trend might be most immediately apparent within leftist, or “woke”, identity politics, there is also a parallel strain of victimhood politics in something like the red-pill movement made up primarily of young men. Frustrated by the lack of healthy male role models, opportunities to experience coming of age rituals and meaningful work, these men have now turned to women as the proximate cause of their ills, like early-modern peasants blaming witches for their misfortunes.

They bemoan the gynocracy, haunted by memories of mothers and teachers who have controlled and scolded them throughout their lives. And as a result, they seek out strong and often toxic role models who feed into their victimised self-perception and encourage misogyny. Fundamentally, this is just the same kind of aggrieved politics as the derangement of late-stage liberalism: this is not the life I was promised, I must find a nearby scapegoat to pin the blame on.

These are just two examples from the Left and Right, but this broader culture of BPD is widespread and growing. Radical feminists blame men, ecomodernists blame Luddites, vegans blame ranchers, environmentalists blame climate change deniers — the list goes on. But while this culture is clearly unhealthy, it’s also a natural and understandable psychological response to the sense of powerlessness fostered by an increasingly constrained material world. The ultimate destination of this narcissistic fantasy is ridding the world of all its evildoers — a kind of gnostic apocalypse in which only the truly righteous will enter the kingdom of heaven. Yet this is the exact opposite of the cultural approach we’ll need to survive. In the previous era of increasing resources, we had the riches to increase our independence; we no longer needed one another to survive. Today, however, as resources and stability begin to wane, we must rely on one another again.

The antidote to the individualistic culture of narcissism created by the upswing of energy resources, as well as the culture of victimhood birthed by its painful downswing, is a culture of interdependence, an acceptance of limits, and a reliance on mutual care. Historically, humans living within material constraints were forced to rely on one another to get by, with some of the worst impulses of human nature constrained by mutual interdependence. Our greatest moderating force is the experience of being relied upon, and relying upon others.

Fossil fuels drove us all crazy: perhaps the collapse of man’s brief age of energy abundance can make us sane again.