Some architectural preservation groups have an easier task than others. Those campaigning on behalf of medieval churches or Jacobean country houses are in many ways pushing at an open door, given the general British affection for lovely old buildings. I suspect things are different for members of “Brutiful Birmingham”, an association of Birmingham residents who have taken up arms on behalf of that city’s threatened Brutalist heritage, notably the enormous Ringway Centre.

Brutalism had a brief heyday in the decades after the Second World War, an era of cultural optimism, new ideas and technological advance. But it has never exactly been popular, despite the best efforts of a small band of devotees. One such devotee is Barnabas Calder, an architecture academic and writer. In his passionate and well-written book Raw Concrete: The Beauty of Brutalism, he makes a strong and learned case for the style, focusing on its vigour and monumentality.

The book is a refreshing read. It was also a challenging one, given my own convictions about architecture, which are rather more on the Roger Scruton-reading, tweed-adjacent end of the scale. It certainly made me rethink some of my former prejudices towards the style.

For one thing, we cannot level against Calder the charge often faced by modernist architects, that they expect other people to live in their unprepossessing creations while they themselves retreat to classically proportioned Georgian townhouses or the gothic splendour of Victorian villas. When selecting a Cambridge college for his doctoral work, Calder chose Christ’s, on the basis of its famous Brutalist accommodation block, called New Court, and caused considerable bafflement to an admissions officer by specifically asking to live in it. He even spent a night in the “Hermit’s Castle”, a mysterious but fascinating bunker-like structure near Achmelvich in the remote north-west of Scotland, built in the Fifties for now-obscure reasons by a largely forgotten architect, David Scott.

Raw Concrete is akin to Richard Taylor’s classic How To Read A Church, in that it teaches the reader to begin to appreciate something that may at first feel incomprehensible and alien. Calder does an excellent job of putting Brutalism in its historical context, noting how the unprecedented abundance of cheap energy in the years after the Second World War meant that public projects could become much more structurally ambitious. He draws parallels with the huge reforming impulses that had been unleashed in post-war Britain, which involved reconstruction of the physical fabric of the big cities, the growth of the welfare state, the expansion of the middle-class, and the new universities.

It is easy for conservative-minded people to forget all this. The temptation is to look back on mid-20th century Britain through the distorting prisms of the economic disruption of the Seventies and the failure of the post-Sixties social settlement. However, life must be lived forwards, even if it can only be understood backwards. It is an injustice to the early Brutalists to associate them too directly with the things that went wrong in the years to come. Calder gently pushes back against other anti-Brutalist arguments, principally the suggestion that it was an excuse for fast, cheap and shoddy construction. This was undoubtedly the case in certain places, but he demonstrates quite conclusively that many of the most striking and prestigious projects were expensive and time-consuming. The Barbican took 20 years to complete. The New Court at Christ’s, Cambridge, by no means enormous, took four years, with a long lead-in of planning and development.

Brutalism, he makes clear, was in some ways a reaction against the early modernists, particularly what is now known as the International Style — think white square boxes, with large expanses of unadorned flat wall and large windows, and a certain sense of fragility and lightness, often heightened by the use of thin support pillars. These early modernist buildings, like the American Farnsworth House or the incomplete estate at Frinton-on-Sea in Essex, tended to be relatively modest, lacking the audacity that came to mark Brutalist construction.

It is the ambition and scale of Brutalism that really seems to inspire Calder, just as it has inspired members of Brutiful Birmingham. He writes movingly about his years teaching in Strathclyde University’s architecture school, and his first time seeing London’s Trellick and Balfron towers “in the flesh”. Even for a sceptic, it is hard not to get carried away by his delight, although I cannot take as much joy as he does in the limited and functional ornamentation of stairwells and roofs. The drama and uniqueness of buildings like the National Theatre is hard to gainsay, even for the doubter. I am also a fan of Dunelm House, the now-listed Brutalist HQ of the Durham University student union, which narrowly escaped demolition last year. It is a fine example of a medium-sized modernist building that looks good in a comparatively spacious setting, where it doesn’t intimidate or overwhelm its neighbours, nor ruin the harmony of a street. The socialist case for Trad Architecture

This was not the case for every Brutalist scheme. Some of the best-known were, or are, too gargantuan, and embodied a kind of monumental disdain for the city around them. The Tricorn Centre in Portsmouth and Gateshead’s Trinity Centre, both praised by Calder and both now demolished, were in this category, as is the Cumbernauld Centre in the Scottish new town of the same name. Of course, defenders of Brutalism might counter that the replacements for both Tricorn and Trinity are mere bland boxes with no vision or ideals behind them, anonymous additions to the steel and glass canyons that dominate early 21st century commercial architecture. At least Brutalism was about something!

It’s a reasonable point. Plausibly, the growing popular disillusionment with Brutalism since its heyday is not always the result of a specific dislike of the style, but of a more generalised fatigue with the uninspiring and tedious buildings that have become so prevalent in British towns and cities. It is also unfortunate that the high point of Brutalism coincided with the start of many disastrous trends in town planning, and the rise of car dependency which we are still struggling to manage today.

This doesn’t get Brutalism off the hook entirely. It’s hard to escape from the fact that concrete tends to age poorly, and as a material is generally ill-suited to a country that is often overcast and gloomy. (Calder, to his credit, uses very ordinary photos of his cherished masterworks, not the deceptive kind taken on cloudless sunny days that you find in coffee-table books.) Grandiose concrete construction is often highly inappropriate for British townscapes, which have gained much of their charm and attractiveness from harmonious and organic interrelations between neighbouring shops, houses and offices. Calder’s much-loved New Court was a sharp break with the rest of Cambridge’s King Street, presenting a stark and imposing bare façade. There are people who find such dramatic statements thrilling or even sublime, and I can see why, but to many others it is unsettling and unwelcome. 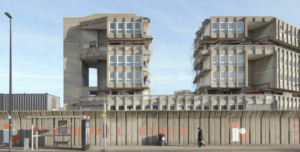 Architecture is unlike the other arts, in the sense that it is inescapable. I don’t like Jackson Pollock paintings or Marvel films or overwrought high Victorian poetry, but they are very easy to avoid. The built environment is not like that. It belongs to all of us, because all of us have to make our lives within it. The aesthetic preferences of the ordinary and unsophisticated may be frustrating to the more educated and advanced, but when it comes to their homes and their workplaces and their communities, it is unjust to ignore them.

So I am not a convert — not exactly. For one thing, just as Calder insists that we must disentangle aesthetic judgments about Brutalist buildings from the social and political problems with which they have become synonymous, we can be grateful for the achievements of post-war governments — in sanitation, living standards, and a more equal society — without accepting that Brutalism was inseparable from, or intrinsic to, those achievements.

Maybe I am simply too conservative to truly love austere innovations in architecture that represent such a radical rupture with the past. Calder notes that some Brutalists, like Denys Lasdun who designed New Court and the National Theatre, were influenced by classicists such as Nicholas Hawksmoor, and he draws some lines of continuity between pre-modernist and modernist styles. This may well be true, but it’s hard for the non-specialist to see such continuities, and one should not have to be a specialist in order to feel at home in an urban setting. There is much to think about in some of the key tenets of architectural modernism. Most intriguing, perhaps, is the emphasis on “honesty”: the belief that buildings should as far as possible reflect the technologies and spirit of their own times, that they should not hide the materials or techniques used in their creation, and that they should reflect a democratic and liberating spirit. This is why they are so little adorned, and why they often seem stark and confrontational, and why they are so different from what came before. Basil Spence’s new Coventry Cathedral, completed in 1962, is a good example of a mostly successful attempt to come up with an appropriate idiom for Christian churches in a fractured and uncertain modern world where older forms feel exhausted or inadequate.

All the same, there are traps lurking in the background. Several times in Raw Concrete, Calder contrasts one of his favourite Brutalist landmarks with the ordinary, comfortable suburbia in which he, like so many of us, grew up. The impulse behind the comparison — the need to break from home and form our own tastes, to experience the grandeur and variety of the world — is perfectly natural and normal. The moment in the book where Calder describes fulfilling a long-held ambition, by visiting the top of one of the Barbican towers and peering down a dizzying triangular staircase, was spine-tingling.

But there is a danger in taking this instinct too far, and making the rejection of the traditional and the mundane a cornerstone of our thinking. Man does not live by magnificent concrete set pieces alone.