The most damaging political scandals are simple at heart. They involve basic human sins. We all understand stories about greed or sex or hypocrisy because they are such universal human failings. Which is why stories about lockdown parties in Downing Street get noticed by the public.

Something similar applies to a story unfolding here in Hong Kong. It too involves dozens of senior officials ignoring the advice of their own government by going to a party — although many of the details reveal the differences between the two approaches to Covid.

The basic facts are straightforward. With Hong Kong on the brink of its fifth Covid wave, the Government this month advised people to avoid large gatherings. Yet last week, dozens of government officials and politicians instead went to a birthday party in a tapas restaurant, hosted by Witman Hung, Hong Kong’s delegate to the National People’s Congress. Estimates of the number of people present vary — and indeed, keep climbing as more information seeps out — but more than 200 seem to have been involved at various points in the evening.

A few days later, one of the women at the party then tested positive for Covid.

If you are a close contact of a known Covid case in Hong Kong, you don’t get pinged and asked to stay at home for a bit. Instead, you are taken off to a room in a quarantine centre for up to three weeks. It is common to see these rooms described as spartan or like being in prison, albeit by people who have never been to prison and wouldn’t have lasted long in Sparta — but they are not the Mandarin Oriental and three weeks stuck in a single room is far from pleasant.

This policy is stern and unbending. Currently sitting in quarantine, for example, are a class of kindergarten kids, aged three and four. Even contacts of close contacts have found themselves locked up, albeit it for shorter periods, while they are tested. The result is that multiple members of the Government, including the home affairs secretary, the head of immigration chief, and the secretary for financial services, now find themselves in quarantine. Others escaped by being able to prove they left the party before the Covid case turned up — although at one point, when a second case was identified, it looked as everyone might get locked up, only for the second case to turn out to be a false positive.

A key difference between the stories in the UK and Hong Kong is that the Chief Executive Carrie Lam wasn’t at this party and moved swiftly to distance herself from those present, in an event one Hong Kong observer referred to as the Night of the Long Ibérico Ham Knives. To paraphrase Jeremy Thorpe, when Harold Macmillan defenestrated multiple colleagues in an attempt to save his own political skin: greater love hath no woman than this, that she lay down her friends for her life.

It is not that those attending Witman’s party had necessarily broken any laws, although things are a bit murky as to whether everyone had been entirely on it when it came to using the tracing app required to enter restaurants. But they had all gone against their own government’s clear advice.

And then there’s the public reaction. The overwhelming response of the public to the various Downing Street beanos has been anger at the hypocrisy of politicians who appear to have been behaving in a way that they were preventing others from doing. All those people who couldn’t visit a dying parent — and, as one of this group, here I declare an interest — look askance at politicians going on the razz.

In Hong Kong, there is anger at the behaviour of their politicians, but it is mixed with massive dollops of schadenfreude. By European standards, Hong Kong’s fifth ‘wave’ is less of a wave and more of a millpond. It has involved fewer than 50 cases thus far. In a territory of more than seven million people, one of them just happened to attend a party containing many of its most senior political figures; of all the tapas restaurants in all the towns in all the world, she walks into mine.

Depending on your point of view this is either a sign of how unlucky the politicos were or, and this seems to be the view taken by many of the people I speak to, it proves that that there is indeed a God. Because it is, bluntly, hugely enjoyable to see people who have inflicted such heavy-handed measures on the population hoist by their own petard like this, especially when not all of them have handled their incarceration with grace and dignity. 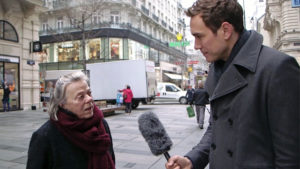 Inside the Austrian lockdown

As an example of how heavy handed it is, consider this. At the same time as the Witman story unfolded, a four-year old girl tested positive for Covid — and was put on her own in an isolation room in hospital, with a bell to ring should she need anything. Somehow, and because she was bored or terrified or lonely, she managed to escape. When she was spotted, maskless, outside of her room, she was sent back in, for what could be weeks of isolation, while the two staff who found her were themselves carted off to quarantine. In almost any other place in the world, isolating children like this would be a huge story; in Hong Kong it has somehow become accepted as normal. It, and the many other restrictions in place here, are not normal.

The flipside of how easily we understand some scandals is that sometimes we fail to comprehend the more complicated, duller, but maybe more serious issues. And however enjoyable the Witman scandal is, there is a danger that it all distracts from the broader points about Hong Kong’s record of dealing with Covid.

The cautious approach that initially served it well is now crippling it. The death rate remains staggeringly low relative to the rest of the world; per capita, the UK’s death rate is 78 times higher. But this policy is becoming increasingly unsustainable, the measures required increasingly harsh. What once advertised itself as ‘Asia’s global city’ is becoming ever more isolated. Multiple travels bans are in place; even of those who can fly in, most have to spend three weeks in quarantine. Hong Kong’s airport is now a ghost town, save for the families leaving. The goal of reopening the border with the mainland — which Lam and others see as their priority — appears no closer to fruition either.

The vaccination programme has been a disaster. Despite ample resourcing and availability, fewer than a fifth of the over-80s are vaccinated. The Government’s approach to driving up the vaccination rate has been woefully hands-off, wasting months when the city was effectively Covid-free which could have been used for a vaccination drive. The agony of the anti-lockdown centrists

The result has been that the handful of cases seen since January have led to a widespread reintroduction of restrictions, including, as I write this, the suspension of face-to-face teaching in primary schools. This will be the third time since Covid began that primary teaching will have been suspended. (All local schools, including secondaries, were anyway still not back to full face-to-face teaching anyway, even two years into the pandemic.) Announcing the closure of schools, Lam said that she didn’t want to see young children sent into quarantine; that there may be other ways of dealing with this appears not to have occurred to anyone.

The inter-generational tensions caused by Covid are evident all around the globe, with the young, mostly safe, forced to undergo restrictions to protect the more elderly. But nowhere is this issue starker than in Hong Kong, where the youngest are again being punished to protect an elderly population that has done next to nothing to protect themselves — and by a government that has also done next to nothing to make them protect themselves. This, rather than a piss-up in a tapas restaurant, is the real scandal.