Six months ago, I was abruptly removed as independent Co-chair of the Mayor of London’s Violence Against Women and Girls Board, an unpaid role I’d held since 2013. For more than a year, I had been trying to get an assurance from senior figures at City Hall that women’s refuges would not lose funding if they excluded men.

This might seem an uncontroversial policy for organisations providing accommodation for female victims of domestic violence — but that was far from the case. Research by Dr Shonagh Dillon, CEO of an organisation that supports victims of domestic violence in Hampshire, found that service providers “understood that they risked their funding if they spoke up in objection to trans women in female-only spaces”.

And so in the summer of 2020, I wrote to Sophie Linden, Deputy Mayor for Policing and Crime, warning her about the chilling effect of Sadiq Khan’s mantra that ‘trans women are women’ on organisations that might seek funding from City Hall. I didn’t get the clear assurance I sought so in October that year I wrote to the Mayor, asking whether he believes that single-sex spaces are lawful in certain circumstances and necessary for the protection of the most vulnerable women in London.

It should have been an easy question to answer: back in 2009, when he was a Labour MP, Khan voted for what became the 2010 Equality Act and its list of exemptions, one of which allows organisations to provide single-sex spaces. In my letter to the Mayor, I said we are entitled to know if he has changed his mind about a piece of legislation that’s vital for the protection of women. That was sixteen months ago — and he still hasn’t replied.

My sacking as Co-chair of the VAWG Board came the following summer. I was aghast at the insensitive way it was done — by email, on a Friday afternoon when the entire country was stunned by a horrific mass shooting in Plymouth the previous evening. The killings were carried out by a young man who appeared to be an incel, a phenomenon I had written about in Home Grown, my book on the links between misogyny, domestic violence and terrorism. I was in the middle of doing broadcast interviews, explaining the background to the harrowing events in Plymouth, when the email arrived from City Hall. Within days, more than 4,000 women had signed a petition calling for my reinstatement. They’re still waiting for the Mayor’s response. At the time, Linden dealt with press inquiries, insisting that my removal was due to a restructure and had nothing to do with my views on transgenderism or any other issue. In a phone call, she apologised for the way I was informed and asked me to stay on as an ‘advisor’ to the board. I couldn’t see any point, given that I would no longer have any influence over the agenda. All the while, violence against women was reaching epidemic levels, with the number of rape reports in London climbing to a ten-year high in March 2021.

In that very month, Sarah Everard had been abducted, raped and murdered by a serving Met Officer. On the morning after Cressida Dick revealed the news that Ms Everard’s remains had been found, I received a phone call from Linden. Somewhat to my astonishment, she said she was calling to ask me what Khan should say about it. A few weeks later, I got another call from Linden, asking what the Mayor should say about VAWG during his campaign for re-election.

None of this inspired confidence in the regime at City Hall, to put it mildly. I kept on raising important issues, however, such as the Met’s egregious failure to identify sexual predators within its own ranks. I insisted that senior officers should attend the next meeting of the VAWG Board to tell us how they intended to deal with violence committed by police officers, and I called for a public inquiry into misogyny at the Met. I got no support from City Hall; suffice it to say that I wasn’t surprised by the series of scandals that culminated in Dick’s sudden resignation earlier this month.

After my phone conversation with Linden in August last year, amid a blizzard of emails cancelling all my scheduled meetings at City Hall, I agreed to write to her formally. I reiterated my view that the board needs a Co-chair who isn’t a salaried employee of the Mayor, and asked for a ‘yes’ or ‘no’ answer to my question about Khan’s support (or otherwise) for the crucial exemption in the Equality Act. In a pattern I’ve come to expect from the current administration at City Hall, Linden did not write back for five months. 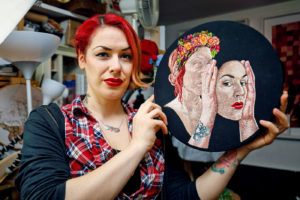 In a letter that finally arrived earlier this month, Linden says that she and Khan “have always been clear that the commissioning of all of our services will be based on the best interests of the user”. But if we are talking about a women’s refuge, who is the user? Many of us would say it means natal women, but here is Linden’s answer: “It is vital that anyone seeking refuge is able to access the services they need and that women, including trans women, fleeing abuse from men should be able to access spaces where they feel safe”. (My italics.) If the Mayor intends to fund separate refuge spaces for people who are transgender, no one would argue with that. But does he?

I also doubt whether service providers will feel reassured by the legalistic language in Linden’s letter, which stands on its head to avoid offering an unequivocal endorsement of single-sex spaces: “Our approach in commissioning services does not penalise any agency that is working within the boundaries of the law… No agency we fund is required to act any differently from the requirements of equalities legislation.”

So what happens if the board of a refuge has a different interpretation of the Equality Act from the Mayor? If the CEO refuses access to a male-bodied trans woman, prompting howls of outrage from activists, will her organisation be treated by City Hall as “working within the boundaries of the law”, or accused of transphobia? Would any service provider funded by the Mayor dare take the risk?

There is one significant revelation in Linden’s letter. In a major climb-down, City Hall now accepts that the VAWG Board needs an independent Co-chair. It’s back to the status quo, in other words — but I’m not going to be reinstated. Despite offering fulsome thanks for “the vital work you have done for women and girls through your role on the VAWG Board”, City Hall has been having discussions about appointing an “external expert”. Members of the board will be ‘notified’ when an appointment is made. Forgive me thinking there is a bitter taste to all this. Khan went on supporting Cressida Dick, calling into question his judgement, long after I pointed out that the Met’s culture was mired in misogyny. Now Dick has gone and the country’s biggest police force has been left rudderless. Four and a half million women and girls live in London, where they face quite unacceptable levels of violence, yet the Mayor’s attachment to gender ideology appears to mean that no one at City Hall can talk about women without instantly adding ‘including trans women’.

More than ever, women in London need someone to stand up for their rights and make sure their voices are heard. As a feminist who believes in biological reality, that person evidently won’t be me.