After the tragic killing of George Floyd in 2020, much of the virtue-signalling that followed focused on an unexpected target: admissions processes. Activists claimed children “of colour” weren’t getting their fair share of places at good schools — or, to be precise, black and Hispanic children weren’t. The same couldn’t be said of Asian children. And so Asian students became a convenient scapegoat for “anti-racists”.

At my son’s school, Thomas Jefferson High School for Science and Technology (TJ), Asian children account for about 70% of the student body. Many have worked incredibly hard to get into the prestigious institute, supported by first generation immigrant parents who, like me, see education as the best route to security and success. But in the months when America was rocked by race riots, self-described “equity warriors” described the Asian, mostly immigrant families of TJ as “white-adjacent” and “resource hoarders”. The white principal, Ann Bonitatibus, told us to check our “privileges”, while one teacher called on her to push through a “Diversity Initiative” while “The Iron is hot!”

In the months that followed, the local school board — all 12 members endorsed by the Democratic Party — voted to remove the school’s merit-based, race-blind admissions process, and replace it with one that was race-based. Along with other parents I was horrified by the school’s readiness to use identity, rather than achievement, as the basis of admissions. But when we objected, the Virginia education secretary, a Democrat, told our families that preparing for tests was like using illegal “performance enhancement drugs”. A black father, Harry Jackson, who spoke up for our cause was called a “motherfucker” selling “segregationist bullshit” — by a white activist who uses the Twitter handle @Antiracist14. These “anti-racists” have worked day and night to try to silence us, using pressure and insults, instead of debating us.

And our story is far from unusual: racist admissions processes are being reintroduced across America. Take the case of San Francisco’s elite Lowell High School, which garnered national attention last week: the overwhelmingly progressive city — Republicans account for less than 7% of the electorate — voted to recall three Democratic members of the school board in a landslide. One of those fired was Alison Collins who, in a now infamous tweet, had called Asian Americans “house n****rs”, insinuating that Asian parents who disagreed with her plan to turn an outstanding school into an experiment in racialism are captive to white supremacist forces. Like at TJ, activists waged a war on merit at Lowell, in the name of “equity”. Asian Americans, through diligence and ambition, had earned an impressive number of slots — so they were disparaged as “privileged” by anti-racist activists, who called on the school to replace merit-based testing with a lottery. The result was striking. Asian freshmen admitted to Lowell in 2021 fell to 42% from 50% the year before. White enrolment also decreased, to 16% from 21%. Black students increased to 5% from 2% and Hispanic students rose to 25% from 14%.

This process doesn’t just harm Asian American students. Despite increasing the enrolment of black and Hispanic students, schools like TJ put little effort into preparing them for their advanced academic classes. In school district enrolment figures made public for the first time, eight freshmen students, admitted through the new race-based admissions process, dropped out of TJ over just five months, between September 2021 and January 2022 (in the entire school year before, just one student dropped out). Changing admissions processes of outstanding schools does nothing to address the systemic failure of the education system to ensure these students are ready for rigorous training in Maths and Science. It also insults and demeans the achievements of black and Hispanic students who get into schools like Lowell and TJ through sacrifice and achievement. The message is clear: stop trying so hard. (The school district claims its new admissions process is “race neutral.”)

The United States Constitution — and common sense — tell us that a just society requires equality of opportunity, regardless of race, ethnicity, gender or social status. “Equity” is a divisive, illiberal system fundamentally at odds with this ideal, because it preaches that there is a quota of opportunities for every group; individuals now find that their skin colour ends up being more important than their hard work.

One year ago, I waited in a virtual waiting room to express those views to the San Francisco school board. I wanted to explain that it had made me sick to my stomach to witness the disdain endured by parents who look like me, for immigrants from Asia with dreams like my family’s. I’ve written here before about how I moved to New Jersey from India, as a child who spoke no English. What I didn’t write was that we lived in poverty. While I was learning the alphabet, I received free breakfast, part of America’s social welfare program for the poor. Now, families like mine are being called “privileged” and “white adjacent” just because our children have achieved academic success, like I did. 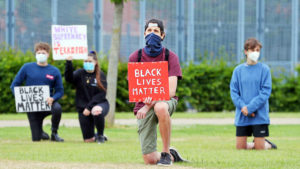 The board members never called on me in that meeting. Instead of sharing my story, I listened to Collins — whose tweet calling Asian families “house n****r” had just emerged — discussing her efforts to change admissions to Lowell High School.

Other parents watched in shock, too. Siva Raj, an immigrant from India and father to two sons, wanted something very simple, he told me in an interview: for his sons to be able to return to school. For almost a year, the board had been on a virtue-signalling crusade — scrubbing American icons such as Paul Revere and Abraham Lincoln out of school names — while utterly failing to address the elephant in the room. In cahoots with the powerful union, the California Teachers Association, and a far-Left wing of the Democratic Party, the Berniecrats, the board showed little concern as parents pleaded with them to come up with a plan to reopen schools closed during lockdown.

All children, but especially the most disadvantaged, were suffering terribly under remote learning. Even the uber-liberal mayor of San Francisco wanted schools reopened. But “the school board had a wall of indifference,” Raj told me. And so on Valentine’s Day 2021, he sat in his kitchen with his partner, Autumn Looijen, and cooked up a plan: a recall election.

Looijen readied the papers and that Friday, Raj posted a Priority Mail Express envelope, his hands trembling. At the time, he was only in the US on a work visa (now he is on the pathway to citizenship). Growing up in an apartment above a carton factory in Chennai, where his parents worked, Raj learned to never challenge authority. “This is what gets your throat slit”, he said. But he could see his sons withering under online learning. Last week, Raj stepped onto a small stage at Manny’s, a community space in San Francisco’s Mission District, and read the results of the recall election. Looking on were leaders of the Chinese American and Indian American communities, as well as other parents. “We had a cross-fertilisation of energy”, Raj told me later: parents of all races, backgrounds and political beliefs had united to oppose the corruption of our educational system.

Even the progressive New York Times declared, “The recall, which galvanized Asian-Americans, was a victory for parents angered by the district’s priorities during the pandemic”. This felt like a turning point: the mainstream media has been all too eager to perpetuate the idea that parents who object to the prioritisation of “anti-racism” over effective education are “Republican strategists”, “right wing activists”, “suburban white moms”, “conservative white parents whipped into a frenzy” and “white supremacists” engaged in “domestic terrorism”. And yet these parents prevailed in San Francisco, arguably America’s bluest city.

And the implications of this victory ricochet across the nation. Prior to the recall election, Allison Collins posted a video of me speaking to my school board, asking why someone in Northern Virginia would care about a school’s dust-up on the West Coast. What was I thinking, “penning” articles about the story in which she was embroiled? The problem with anti-woke liberals

After the results were in, I answered Collins. I am “penning” articles about Lowell High School because it is one battleground of many where Asians have become the illiberal regressives’ scapegoat, punching bag, doormat — pick your metaphor. In the new hierarchy of human value put forward by “anti-racism,” Asians don’t count.

Indeed, Hannah Nikole Jones, the author of the controversial “1619 Project”, once posted a tweet arguing that it was “disingenuous” to say that New York’s specialised high schools have “majority people of color”, because the majority are Asian. In November 2020, North Thurston Public Schools in Washington state — which includes 22 schools and some 16,000 students — lumped Asian and white students together, excluding “Asians” as “Students of Color.”

And, in discriminating against Asians, Lowell mirrors not only my son’s school, but schools across the country. In August 2020, in Loudoun County, Virginia, the mostly-Democratic school board ignored the pleas of Asian families from India by suddenly eliminating the merit-based admissions test to its advanced academic science and technology high school programmes. The same year, Boston’s all-Democratic school board dismissed the protests of Asian parents, who said their children were being targeted in a plan to change admissions to the city’s most advanced schools, imposing postcode quotas and a lottery system. In both cases, just as in San Francisco and northern Virginia, new freshmen classes saw a decrease in the number of Asian students.

For a long while, the parents fighting against these measures were outliers. Many are understandably afraid of cancel culture; some are already marginalised in their communities, because of their race, their fear of challenging authority, immigrant status and the fact they speak English as a second language. But the case of Lowell High School shows what they can do when they find the moral courage to organise. This courage, for many, comes from the high stakes. For many immigrant families, education is a way out of poverty; for others, it is the path to becoming more settled: secure jobs, rewarding careers, a deciding role in America’s future. As one father said online, as parents celebrated at Manny’s, “They touched the third rail for Asians. Never mess with Asians and their education.”