It is hard not to be cynical about “the media” these days, especially if you work in it. Spend any significant amount of time reading newspapers and magazines, watching cable news, or following discussions on Twitter, and you notice that a great deal of what is written and broadcast has a drearily predictable quality. Indeed, discrete events seem almost irrelevant except insofar as they can be slotted into pre-existing storylines.

Take the debates surrounding the trucker protests in Ottawa. The mainstream press, by and large, has attempted to assimilate the protests into categories familiar from the Trump years.

According to Politico, “far-Right” truckers, some of them sporting “Confederate and Nazi flags”, have “wreaked havoc on Canadian cities”. In the Guardian, one writer warned that the “siege of Ottawa” was an “astroturfed movement funded by a global network of highly organised far-Right groups and amplified by Facebook’s misinformation machine.” Slate, after dropping the trigger words “militia”, “hate”, “extremist”, and “Nazi”, called the protests an “armed occupation of a G-7 capital”. All linked the truckers with the domestic threat posed by Fox News, the Republican Party, and the American far-Right.

Critics of the establishment have responded with their own counter-narrative, aimed at portraying the truckers in a sympathetic light while focusing attention on the tyrannical response of the Canadian government. After Justin Trudeau invoked the Emergency Powers Act, Tucker Carlson labelled Canada a “dictatorship” and warned that similar measures would soon be coming to the United States. Over the weekend, as Ottawa police attempted to clear the city centre, Twitter was filled with viral videos of police violence against the protestors, juxtaposed with old quotes from progressive leaders praising the BLM protests of summer 2020, intended to highlight their hypocrisy.

These narratives have a recognisable logic, which holds whether the underlying event is the truckers or the Capitol riot. They are tribal, pitting a virtuous “us” against a malevolent “them”. They are curated to provoke fear of, and rage against, the out-group, often through “empathic triggers” that highlight aggression against the in-group. They are also, in a loose sense, conspiratorial, running together phenomena that have no logical connection except within the pattern of the narrative.

This is easy to recognise in Right-wing conspiracies about the 2020 election, but establishment media indulges in something similar. When CNN leads a story about Joe Rogan’s use of the n-word with a line about a man carrying “a Confederate flag inside the US Capitol rotunda”, the purpose is to train readers to create an emotional connection between the podcast host and white supremacist domestic terrorism, when none exists in reality.

The war between these tribal narratives, according to media theorist John Robb, is the defining feature of US politics today. He argues that a combination of establishment failures — the wars in Iraq and Afghanistan, the Global Financial Crisis — and the information explosion ushered in by the internet have annihilated the legitimacy of the old narratives that used to hold Western states and societies together, nationalism being the most prominent one.

But humans are tribal and narrative creatures — take one story away and we will invent another one. Today, our most compelling narratives — the ones that provide us with the sense of “fictive kinship” formerly provided by membership in a nation, religion, or ethnic group — are political narratives defined by enmity.

This development, claims Robb, is largely the product of social media, where we are presented with more information than we can possibly pay attention to, let alone understand. We make sense of it by picking patterns out of the noise. These patterns, however, are social phenomena. And as the pioneers of clickbait discovered a decade ago, we are especially drawn to content that provokes a strong empathic response — generally something shocking or outrageous, though our specific triggers will depend on which pattern we are curating. Over time, we come to identify with those who respond to the same triggers and assimilate them to the same pattern. Our tribe is the collective of people outraged by the same things that outrage us. 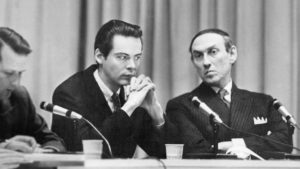 The clearest example of how this works in the real world is the response to the video of Derek Chauvin killing George Floyd. The video was shocking and vivid. In a previous media environment, however, it would have had its emotional impact blunted by layers of context, expert commentary, and he-said-she-said quotes from local police and the Floyd family. Instead, the video was immediately assimilated to patterns such as “systemic racism”, provoking mass rage and mobilisation against not only Chauvin or the Minneapolis police department but the United States as a whole. Video of the ensuing protests set in motion a similar dynamic on the Right, as users curating patterns about “BLM rioters” and “antifa terrorists” circulated vivid footage of lootings, arsons, and assaults, often framed to induce outrage at the Left-wing politicians and journalists who were vocally supporting the protests.

Robb developed his framework as a way of understanding how digital politics and social media were bleeding over into the real world during the Trump administration. Trump himself, of course, had ridden a wave of social media enthusiasm into the White House, and his election prompted many of his more elite, media-savvy opponents to self-organise into the #resistance, which identified and amplified every real and imagined outrage of his presidency (including conspiracy theories about Russiagate).

Robb dubbed the open-source network supporting Trump ‘the #insurgency’. Unlike ‘the resistance’, which operated in the open and tried to compel government and corporate action through moral coercion and appeals to expert consensus, the #insurgency was largely anonymous. It sought to confuse and disorient its opponents, often through jokes and targeted harassment, and to prevent the emergence of consensus around resistance narratives.

For Robb, however, 2020 kicked the tribalisation of American politics into overdrive. First came the pandemic, which damaged an already fraying social fabric and forced Americans to spend more time online than ever before. The death of George Floyd then served as a huge empathic trigger for the Left, not only sparking mass popular mobilisation but also inducing a moribund Democratic Party establishment and many mainstream institutions to officially endorse Left-wing patterns such as “white supremacy”. The Right, in turn, began to tribalise in earnest after November 2020, uniting around patterns of conspiracy — surrounding the 2020 election, vaccines, the Covid-19 pandemic, Big Tech censorship — promoted by Trump and his allies.

The final accelerant, in Robb’s telling, was the Capitol riot. The assault on the Capitol proved for the Left that Trump and his supporters — including the Republican Party and virtually all of its voters — were not merely racists but existential threats to the republic, whose suppression was crucial to ensure the survival of democracy. Perhaps more importantly, the Capitol riot prompted the major tech companies to openly align with the Left, disconnecting Trump — then the sitting president — from their networks under the guise of preventing further violence. Given the control of these companies over not only political discourse but also much of the infrastructure of modern life, this alignment, for Robb, amounted to a declaration of corporate sovereignty over the U.S. political system. Today Robb sees, on the one hand, a corporate and political establishment aligned around enforcing curated, Left-wing patterns as the de facto consensus view of reality — one that combines a technocratic emphasis on “facts” and “science” with a tribal moral narrative about the existential threat posed by racists and white supremacists, constantly reinforced by curated, emotionally charged stories that fit the pattern. On the other hand is an emerging tribal Right — though this tribe can more easily accommodate cranks and dissidents of all political persuasions — organised around a curated pattern of elite conspiracy, drawing its strength from any and all establishment failures and from attempts to censor or suppress its narrative. The victory of the former would represent what Robb calls “networked fascism”, or the alignment of government and corporate power behind a single approved narrative. The victory of the latter would lead to dissensus, disunion, and nihilism.

Robb’s framework provides a useful, if alarming, way of looking at contemporary debates over “misinformation” and online “hate”. Whether or not one buys his ominous warnings about “networked fascism”, his diagnosis of the tribal dynamics of social media — our tendency to assimilate information into politicised patterns, and to respond to empathy triggers that fit our pattern with rage and loathing directed at our tribal out-group — is an important reminder about the ways in which we are constantly emotionally manipulated by social media, often in ways we don’t recognise. And it should make us sceptical of both top-down attempts to enforce a consensus interpretation of reality — which is usually messy and offers few clear moral lessons — and of any bottom-up patterns that posit, as an explanation for all the phenomena that trigger us, some unified conspiracy or plan.

For individuals, too, Robb’s work is a warning about how easily the architecture of social media can be weaponised to make us hate our fellow citizens. Indeed, it is precisely when we don’t experience the emotion as “hate”, but rather as justified outrage against the enemies of everything righteous and holy, that we should be most suspicious.