The stakes associated with any particular climate policy are almost always less than claimed. This rule of thumb, which I’ve learned after more than 30 years working on the climate issue, is worth keeping in mind in the wake of West Virginia Senator Joe Manchin’s about face last week on the Democratic budget reconciliation package.

Only two weeks ago, Manchin, citing concerns about inflation, seemingly killed the package of clean energy investments in the Democrats’ Build Back Better proposal, leading John Podesta of the Center for American Progress to declare that the senator had “single-handedly doomed humanity”. Then, last week, Manchin brought that package back to life, now rebranded as The Inflation Reduction Act of 2022. The reaction of the American press, which until recently had been mulling kicking Manchin out of the Democratic Party, has been exuberant. Writing in the New Yorker, environmental activist Bill McKibben praised the bill as a “triumph”,  while Time deemed it “the most significant climate legislation in US history”.

This follows over a year in which Manchin, cast in the role of Hamlet, has seemingly held the fate of the planet in his hands. Media hysteria aside, however, Biden’s climate plan was never going to be the difference between apocalypse and salvation.

From its origins during the 2020 primary campaign, Biden’s climate and clean energy package was explicitly positioned as an alternative to Alexandria Ocasio-Cortez’s expansive Green New Deal, which Senate Democrats had refused to vote on. As his rivals sought to outdo one another with sweeping climate policies, most especially Bernie Sanders’ preposterous $14 trillion climate proposal, Biden backed a $1.7 trillion plan that his campaign explicitly characterised as moderate. Whereas other proposal promised to transform American society, the Biden plan focused on infrastructure, reshoring manufacturing, an “all of the above” commitment to clean energy, and technological innovation.

Despite criticism from environmentalists and progressives, Biden never budged from that approach. Upon securing the nomination, Biden rebranded his package “Build Back Better”, and upon winning the presidency, his administration and allies in Congress moved forward to enact it. And while Manchin’s “will he or won’t he” act has transfixed the national media, most of what Biden proposed during his campaign under the banner of “Build Back Better” has already passed into law. A trillion dollars of that $1.7 trillion pledge became law with the passage of the Bipartisan Infrastructure Law last November, including almost $200 billion for clean electricity transmission, electric vehicle charging, public transit, and climate adaptation. Other elements were included in the Endless Frontier Act, passed in June of 2021, and in the just-enacted CHIPS Act. While Manchin has been villainised for his ever-changing bottom line on climate action, far too little attention has been paid to progressives’ own ever-changing lines in the sand, which have obscured America’s real accomplishments on climate change while exaggerating the importance of the ill-conceived policies favoured by the environmentalist Left.

Take the Clean Electricity Payment Program (CEPP), a torturous effort to use tax-and-transfer mechanisms to eliminate carbon emissions in the power sector by 2035. From the moment that CEPP was proposed in the spring of 2021, progressive climate advocates claimed that it was central to any credible package to address climate change. Their slogan, “No Climate, No Deal,” meant that Democrats should pass neither the Bipartisan Infrastructure Law nor a budget reconciliation package that failed to include the CEPP. Manchin, for his part, countered that it was an expensive policy that would pay utilities to do things that they would likely do anyway.

Manchin was, in reality, largely correct. Most analyses concluded that the CEPP, even if it worked as advertised, was at best a secondary or tertiary policy lever — the vast majority of the actual emissions reductions in any bill would come from direct investments in clean energy technology. And progressive demands ultimately fell upon deaf ears, with the Left failing to either enact CEPP or prevent passage of an infrastructure bill that lacked the mechanism. But the Left’s complaints, amplified by a compliant national media, succeeded in turning what should have been a popular and desperately needed victory for Biden administration into a footnote in a contentious battle over climate change. 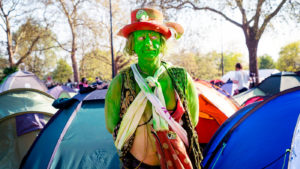 Since the passage of the infrastructure bill last year, Manchin has haggled with the White House and Senate Majority Leader Charles Schumer over the size and composition of the Build Back Better package, as both the national economic picture and Biden’s political fortunes have deteriorated. Now it appears Manchin has engineered a package that includes $386 million in climate and energy spending, as well as an apparent commitment from Schumer and House Speaker Nancy Pelosi to allow federal permitting reforms that would allow for the speedy deployment of new energy infrastructure. No less significantly, he has repositioned the entire package as a response to inflation, not climate change.

All that haggling, however, does not appear to have shifted estimates of the reconciliation bill’s climate impact. Most models agree that current policies will result in US emissions in 2030 being 25% to 30% lower than at their peak in 2005. Depending on whose modeling you believe, passage of the reconciliation bill, together with other investments already committed into law, could result in emissions being 40% to 50% below 2005 instead.

But one need not spend much time perusing models to conclude that these projections are best taken with a pinch of salt. They are based upon a range of assumptions about how quickly the economy will grow, how much fossil fuels will cost, how quickly the cost of renewable energy will fall, and much else besides. Meanwhile, the track record of these sorts of estimates is not very good. US emissions today, for instance, remain well below levels that would have been mandated by either the last major Democratic effort to pass sweeping climate legislation — the doomed Waxman-Markey cap-and-trade legislation in 2009 — or by the Obama administration’s short-lived Clean Power Plan. On the other side of the ledger, the European Emissions Trading System, established in 2005, has dramatically underperformed. Why I am fleeing to the hills

Ironically, given the intense media focus on CEPP and other now-defunct items on the progressive wishlist, the most important parts of the new climate package may turn out to be reforms to permitting that Manchin demanded in return for green lighting the deal. Throwing hundreds of billions of dollars at clean tech will do little to reduce emissions if utilities and clean energy developers are unable to build it in a timely fashion.

The same is likely the case with regard to seperate and ongoing efforts to reform licensing of advanced nuclear reactors. Recent modeling by my colleagues at the Breakthrough Institute finds that if the US were able to license and build the first advanced nuclear reactors by the early 2030’s, there would be huge market demand for them even if they are relatively expensive. This is because nuclear reactors provide clean energy around the clock, as opposed to just when the sun is shining or the wind is blowing.

If there is a lesson here, it is that climate policy of the sort that is actually politically viable is at best a weak tool for change. Energy use and emissions are much more strongly influenced by macroeconomic factors and long-term technological trends than they are by federal climate policy. Bottom-up policies to encourage innovation and deployment of clean energy technologies are difficult to square with top-down emissions targets. The former, though helpful, bring highly uncertain emissions benefits. The latter are unenforceable should the necessary technological solutions fail to materialise — and unnecessary if they do.

From Alexandra Ocasio-Cortez’s original invocation of a Green New Deal, to the empty threats by progressive members of Congress to walk away from any reconciliation package that failed to meet green purity tests, the maximalist demands of the climate movement — and Democratic pandering to them — were always at best political theatre and at worst self-destructive.

In the light of last week’s change of fortune, Democrats can thank none other than Joe Manchin for saving them from their own worst impulses and reorienting their reconciliation package toward the priorities of an electorate that is far more concerned about inflation and energy prices than climate change, all while finding a way to do right by his state, his party, his country, and the climate.