Where I grew up in the Sixties, girls were expected to marry straight from home. So when I went to That London at 17 to become a famous writer, I was widely assumed in the neighbourhood to have gone there to sexually misbehave. My parents were loving, puritanical, and too embarrassed to Have the Talk, and the school stuff was perfunctory. Yet I went on to have extremely enjoyable sex — rather too enjoyable: it dictated my life choices for a very long time — and I did this by just picking it up as I went along. I certainly didn’t expect the State to help me out in getting my end away.

The young women of today have other expectations, apparently. In her new book Losing It: Sex Education for the 21st Century, Sophia Smith Galer scolds that sexual health service budgets have been cut by 25% since 2014, around the time she left school. She believes this has profoundly affected her life. “The sex myths that I unknowingly subscribed to went on to destroy my first sexual experiences,” she writes. “I spent my eighteenth year viewing my body as a failure… Nearly a decade later, I think quite differently. I see someone who was failed.”

But doesn’t everyone today feel failed in some way? There’s a “there-there” tone to Smith Galer’s writing which seems somehow incompatible with the swashbuckling nature of sex. Indeed, sometimes this book seems less about sex as the slappers of my generation understood it — something which would at least be fun and at best bring love — and more about feelings (preferably hurt ones) and “validation”. Still, despite my initial fears of Wokedom (“We need to be intersectional when we probe our sex lives”), Galer is not afraid to criticise other cultures. It is a relief from the relentless message from certain fauxminists that the white Western world is a hellhole unlike any other for women.

The ludicrous and often lethal value placed upon virginity in parts of Africa and much of the Middle East is examined in grim detail; I’ve never come across anyone who mentioned the lives of women in the West Bank without dragging in wicked Israel, but here we read of “Israa Ghrayeb, a 21-year-old Palestinian girl from the West Bank who died of multiple injuries in 2019. Thousands at the time expressed concern that she might have been killed by her own family members on the basis of photos that she had posted with her fiancé.” Teenagers need to have sex again

Which is not to say that sex is a day at the nudist beach for Western women either. The author has come up against some grim stuff in her life; though much younger than me, she experienced a sex educator who told her: “Every time you have sex, you will lose your special glue. And when you have lost all of your special glue, no husband will love you.”

But many of the ignorant idiots involved aren’t worth railing at: “Countless interviewees have told me how this (idea of virginity) has affected their actual sex lives, including one woman whose partner told her ‘You can’t get into heaven now’ when they had sex for the first time.” Breast-beating and soul-searching aren’t the correct responses to this sort of thing; a quick knee in the groin and a cry of “Neither can you, Numb-Nuts!” might be a better reaction.

Thankfully there’s a chapter on asexuality because by the time you’ve finished this book, you’ll be in the mood not to be In The Mood. This is something Sophia seems to understand — “sexlessness… exists perhaps not in spite of sexual liberation, but because of it” — while not grasping that books like these, presenting sex as a vale of tears, might well be part of the problem. It’s only slightly less off-putting than Laurie Penny’s ridiculous new book, Sexual Revolution, which really appears to believe that having queer sex (aka having regular sex but with blue hair) can bring down fascism.

Sex, as a problematic issue for women, was meant to have been “solved” by now. The Pill and divorce lessened the vulnerability which forced us into sexual servitude. The idea of “Free Love” also promoted in the Sixties promised that men and women could come together as free agents, motivated by nothing but pure pleasure — and nobody would get hurt. 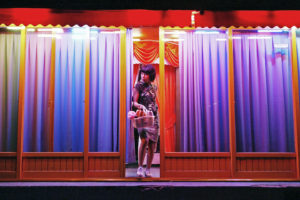 But somewhere between burning bras and online pornography something went awry, and now young women may well find themselves called upon to enjoy being slapped and choked as part of a “fulfilling” sex life. Now, it seems, getting hurt is part and parcel of having sex; as Rousseau might have said “Woman was born free, and she is everywhere in chains.”

And now, the state is increasingly giving hormones and amputations to young people with body dysmorphia. That is a true example of women being “failed” in sexual matters. But the young Smith Galer isn’t interested in inquiring why girls are submitting in droves to having sex organs hacked out of their unformed bodies — so great is their fear of growing up to be the mere Whack-A-Mole of orifices which they see in online pornography from childhood. Consider the admission of teen idol Billie Eilish: “I started watching porn when I was, like, 11… I think it really destroyed my brain and I feel incredibly devastated that I was exposed to so much”, adding that it made her feel “cool” and “one of the guys”.

In the face of this, we have Galer’s at times an unintentionally comical blend of sleeves-rolled-up can-do gumption and existential sorrow: “If I do my job right, you will finish reading this book armed with knowledge around sex, relationships and society that you have been both actively and passively denied. I am not a doctor or sex expert — just a journalist who is used to reporting on the fault lines between the spiritual and the corporeal.”

I realise that as a louche sexagenarian who, in the words of the old pop song has “seen some things a woman ain’t s’posed to see”, I’m not the demographic this book is aimed at. Of course, all education is a good thing and only a cretin or an exploiter would say that ignorance is bliss. But education doesn’t seem to improve sex either; you can recite all the terms and technicalities and still never understand why X made you want to do Y. You still can’t understand why people risk their marriages, lives, and empires for what is on paper a simple physical function.

That’s why it’s not like just having a cup of coffee, as the swingers liked to say. We know 69 ways to have sex but not the first thing about sexual love — what it is and why it leaves, why it can make us so happy and so sad. At the risk of sounding like an old romantic, getting to grips with the ins and outs of sex is probably the least interesting thing about it.