Vladislav Surkov knows that no one goes to see puppet shows anymore. But for more than 20 years, the self-confessed ‘author’ of the Putin system built a career on the idea that puppet-masters can still attract an audience. Swirling rumours in Russia that he has been arrested — the kind of it-might-be-true-it-might-not-be clam he long specialised in — prompt the question of whether his show is finally coming to an end.

Further setting the stage for what might be his final farewell a poem attributed to Surkov was published on Facebook a few days later. It is suitably full of contradictions, opening with the declaration, “I stand at the bottom of a pit, like a mountain’s summit, like the culmination of a drama, like the beginning of the game”. Its macabre ending — “I am going out into the negative, like Magellan into the Ocean” — may describe his fate, or that which he has engineered for Russia.

Publishing poetry is only one way that Surkov positioned himself as unique among Kremlin insiders. And he has always been taken at his own estimation. An advisor to Vladimir Putin from when he first assumed the presidency, Surkov made his name by not only acknowledging that the ‘sovereign democracy’ he helped usher in was a façade, but also by revelling in the fact that he was doing so publicly.

The brashness with which he effected this has made Surkov far better known outside of Russia than anyone else in Putin’s inner circle. In addition to articles in Foreign Policy and a Royal United Services Institute (RUSI) report dedicated to his ‘management’ of Russia’s proxies and media strategy in Ukraine, he has been profiled in both the London and the New York reviews of books. The Atlantic and Business Insider have also given it a go.

Surkov was an attractive subject because he would let Western journalists in on his not-so-secret tactics, and in a language they understood. His quip in response to being sanctioned in 2014 — “The only things that interest me in the US are Tupac Shakur, Allen Ginsberg, and Jackson Pollock. I don’t need a visa to access their work. I lose nothing” — brought him to the attention of those beyond the usual Kremlin-watchers. The fact that he wrote his own novellas, Almost Zero (gangsta fiction) and Mashinka and Velik (gaga saga), and had an on-and-off relationship with Russia’s avant-garde, meant he was also a subject of curiosity for the art establishment.

His ex-wife, the artist Yulia Vishnevskaya, founded Moscow’s Museum of Unique Dolls in 1996, the year they divorced. Since 2004, Surkov has been married to Natalya Dubovitskaya – adapting her name into Natan Dubovitsky as his nom-de-plume. She presents as an art-inspired interior designer but her glamorous Instagram, real estate holdings, and ever-expanding business interests are archetypal of the Russian elite. So too is the rumoured reason for Surkov’s purported arrest — pocketing cash intended to destabilise Ukraine.

Surkov arguably reached his peak cultural prominence when the director Adam Curtis used his ideas as the centrepiece of his 2016 film HyperNormalisation, arguing that Surkov had invented a “new system of political control” by “import(ing) ideas from conceptual art into the heart of politics”. Curtis warned it was spreading from the Kremlin to the West.

Curtis argues Surkov’s open acknowledgement of his puppeteering made it impossible to know what was real and what was true. What many in the West had failed to realise was that — much as he had done with the Russian people — he wasn’t letting them in on the secrets behind his choreography, but turning them into other marionettes. The intellectual origins of Putin’s invasion

Perhaps Surkov once was once in love with the theatre of the absurd, and the idea that we are all mere puppets. But today he sees such postmodernism merely as a tool to impose what he does want to achieve, a strong “long-lasting Putinist state,” the title of one of his occasional public essays.

Surkov has revelled in using the Dadaist approach to mock what he sees as the decadence of the West. He might be the auteur behind the idea that “nothing is true and everything is possible” (as Peter Pomerantsev titled his book on the Kremlin), but on Putinist rule we can take Surkov at his word, given his actions in managing the Kremlin’s extension of power not only in Ukraine but in other parts of Russia’s ‘near abroad’ as well.

His former aide Inal Batuvych Ardzinba now serves as Minister of Foreign Affairs in Abkhazia, one of two Russian breakaway regions in Georgia beholden to Moscow. Surkov also managed negotiations for Ukraine’s Minsk Agreements, while simultaneously hand-picking much of the “separatist leadership” in Donetsk and Luhansk, knowing full well the pacts would not lead to peace. As central as the absurd may be to these actions, Surkov has long effectively managed the expansion of Russian power. 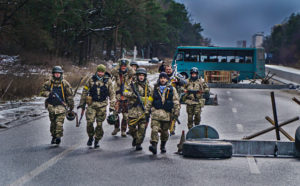 Surkov’s 2019 article on Putinism did not explicitly ascribe any ideology to the regime he had dedicated himself to building. He spent most of it attacking the West for its failure to understand Russia, for its “distrust and envy”, and for its lack of “belief in the good intentions of public officials”. This, interestingly, runs counter to Jean-François Lyotard’s definition of postmodernism as an “incredulity towards meta-narratives”, dismissing decision-makers as people who merely “allocate our lives for the growth of power”. It seems Surkov was happy to do delve into postmodernism for its use in creating confusion, but expressly disagrees with the criticism of decision-makers. His Putinism article ends by using Albert Einstein’s witticism “sophisticated, but not-malicious” in describing the Russian people’s faith in Putin, painting it as quasi-religious.

Before he was removed from the corridors of power at the beginning of the year, Surkov was open about his role and intent in the Kremlin. In a 2021 Financial Times interview, he declared “I am proud that I was part of the reconquest. This was the first open geopolitical counter-attack by Russia [against the West] and such a decisive one. That was an honour for me.” He considered the propaganda that made him famous to be something that “people need”, comparing his output to McDonald’s and dismissing the need for “highly intellectual discourse”. Artistic intent usually requires taking pride in one’s work, or at least in having some underling meaning. For Surkov, his avant-garde tactics are merely a means to an end.

Surkov is by no means the only public intellectual — for that is how he is perceived, even if it fails to accurately describe his intent — to have fallen out with his avant-garde training. The liberal conservative Francis Fukuyama is another.

Fukuyama initially trained in political philosophy and literature, even studying in France under Jacques Derrida, perhaps the most famous of all postmodernists. The very title of his widely misunderstood book, The End of History and the Last Man, is a reference to a concept popular among other Marxist-inspired intellectuals, that there is a linear and perhaps even scientific path to historical development.

Like Surkov, Fukuyama today dismisses postmodernism — in 2018 he told an interviewer that what he had learned from his time in Paris was that postmodernist concept of deconstruction “was total bullshit”. The key difference between Fukuyama and Surkov in their divergence from heterodoxy, however, is in their approach to power. This war can save liberalism

Surkov’s last polemic, entitled “Where Has the Chaos Gone: Unpacking Stability” published online in November 2021, placed “powerful statehood” at the basis of “the recipe for establishing and maintaining order”. He describes the state as “primarily an instrument for reducing social entropy”, before attacking the idea of social chaos that so many postmodernists have praised.

For his part, Fukuyama has acknowledged that his arguments about the future of world power are at least in part inspired by his earlier academic experiences, referencing the Marxist roots to his theory of liberal hegemony. But in his lectures in the years since, Fukuyama has emphasised that his belief in individual agency trumps any potential laws of history.

Both Fukuyama and Surkov’s criticise what they see as postmodernism’s offspring — identity politics, for example — and warn it can weaken the West. But Fukuyama recognises something that the war in Ukraine has made clear, and which Surkov has failed to see: namely that agency does not sit with the state. Surkov’s view that the state is the primary mover of history explains why he and Putin were so eager for war in Ukraine.

It would be generous to describe the Ukrainian state before Putin’s invasion as corrupt and fragile. Putin too appeared to believe this would make it an easy military target, apparently supported by “intelligence” from Surkov’s friends in the Federal Security Service (FSB). Meanwhile Surkov had helped Putin build a power-vertical that would enable the regime to position any propaganda as a crusade.

But it is Ukraine that retains its agency, while Russia has lost it. Its valiant defence of Kyiv, and litany of impressive actions on the battlefield have begun to forge a new unity and idea of Ukrainian nationhood. They also prove the fallibility of Putin’s own state: while Ukraine is recruiting volunteers from neighbouring countries, and even Russia, the Kremlin is resorting to conscripts, mercenary groups and favours from fellow dictatorships to bolster its ranks.

While Putin has sought to rewrite history in his 2020 article on the legacy of World War II and his diatribe the following year on Russian-Ukrainian”‘unity”, his ideas are not taken seriously. Russian policy academics may now bend their thinking to fit them — as do the once-respected Carnegie Moscow director, Dmitry Trenin, or the director of Russia’s International Affairs Council, Andrei Kortunov — but this hardly boosts his power.

The Ukrainian political scientist Volodymyr Ishchenko summarised Putin’s invasion not as the culmination of some superstate as Surkov would have it, but as a “crisis of hegemony; the incapacity of the post-Soviet and specifically Russian ruling class to lead, not simply to rule over, subaltern classes and nations”. Putin and Surkov have failed to build a Russia that serves as an alternative force in history. Instead — regardless of how much territory Moscow is able to claw away from Ukraine — they are witnessing the construction of that alternative by the Ukrainian people.

Russia’s long-cuckolded oligarchs, intellectuals and their offspring now know they can make their voices heard by shouting Glory to Ukraine. Simultaneously, Russian soldiers are being killed while fighting under meaningless and unexplained Z’s. No Russian politician has even attempted to invent a symbolism. The BBC journalist Grigor Atanesian noted the absurdity of Russians fighting under a “symbol void of any meaning… like in a bad 1990’s post-modernist novel”. The Kremlin has not even bothered to revive the Novorossiya project — complete with faux-historical flags — that Surkov once engineered to justify further invasion of Ukraine.

Putin’s army may be fighting against something, but they are not fighting for anything.

The Ukrainians are fighting for the ability to move West, reinvigorated by Putin’s war, towards Fukuyama’s conception of history and away from Surkov’s. In doing so, Kyiv may also be re-invigorating the values postmodernism’s critics argue it had undermined, concepts such as freedom for freedom’s sake, while Ukraine’s Volodymyr Zelenskyy revives the possibility that leaders will once again be seen as heroic.

Surkov’s means achieved the opposite of his ends. It turns out he was no puppet-master, just another puppet.