Every few generations, the Windsors produce unhappy princes: men who can neither leave nor stay. Prince Albert, the older brother of George V, was one, but he politely died of pneumonia before he could take the throne. Edward VIII was another, exiled but lamenting, and now there is Prince Harry. There is no leaving a shared delusion, no matter how much it has harmed you: this kind of attention — the semi-sacred kind — is a powerful narcotic, and you must be a doughty character to withstand it. I think the coalition of declining, unhappy country and gilded royal family is no coincidence. Elizabeth II gave us an illusion of happiness and strength, and I wonder if that died with her. We seem to have no plans now but regret.

We do have a prince whistle-blower, however, telling his fury across six episodes of Netflix’s Harry & Meghan: the first three were released yesterday, and his memoir Spare comes next month. The TV series opens in the VIP Windsor Suite at Heathrow Airport the day the prince left Britain. It tells the story of his meeting Meghan, a coup de foudre, with summaries of his childhood and adolescence, and hers. There are parts on slavery and the British Empire; the stalking and death of his mother; the behaviour of elements of the media (offering her parents money for stories and paying neighbours to mount cameras over-looking her garden); the run-up to the wedding.

The response from the media — many of whom are being sued by the prince — has been negative. The media are accused of intrusion, where they claim there was none: a shot of the couple with their son was taken from an agreed position, and a picture of a paparazzi wall was from a Harry Potter premiere. Media say the cameras he complains of were permitted by the palace, and many were, but that compounds his misery: his family colluded with it. It is sleight of hand, of course, but who can argue they weren’t hounded? Harry shouted at a photographer as a young man: “Why don’t you just leave me alone?” It made the front page: not as an example of our immorality, but of his.

His mother, Diana, was similarly traduced for her Panorama interview. “She was deceived into giving the interview,” Harry says in the documentary, “but she spoke the truth of her experience”: that her husband abandoned her before their wedding day, but he had trauma of his own. And here he reveals the bitterness of monarchy: they are meat or mirrors. They exist to be consumed, or provide a pleasing reflection, and if they resist this, they will be punished. We require absolute compliance for our attention. He asks, remembering his mother’s tears: what am I part of?

It is so obvious that he has PTSD from his mother’s life and death, there is almost nothing left to say. There are videos of him and William in the documentary looking strained but repressing it to be polite. William shows his teeth in a photocall and lies that is happy. Even their father is shown saying that if you don’t learn to negotiate the cameras, you will go mad. Harry says he remembers very little of Diana from his early life, and that makes sense: if you hide your sadness from a child, you hide everything. He remembers the cameras though: they are his most powerful memory. He says that women he wanted were chased away, as his mother was chased away: “the media…. had driven so many other people away from me”.

Like Edward VIII, he chose a woman who he thought would free him because, as a non-British subject, she was not daunted by status. She enabled him, unlike Edward VIII, to relive the trauma of his mother’s experience, and regain some control of it. He says he fell in love with Meghan when he saw a photograph of her with dog’s ears and a dog’s nose, and that is understandable. He is an English nobleman. It is true that Meghan is easy to mock. She is ridiculous in the way that all rich people who want to be known for goodness are, and so is he. She seems aggrieved that when performing royal duties, she had to wear neutrals (fawn, camel, cream). Then we saw a photograph of the late and current queens dressed as Cadbury’s Roses for contrast, and I laughed.

There is a shot of Meghan feeding chickens in Montecito. In the next shot, she is sitting beside a bowl of crystal balls, and I wondered briefly if they were the eggs. She seems uncomfortable expressing emotion and hides under a film of quasi-emotional language so hackneyed it is meaningless. I think it indicates insecurity, not self-love: before one date with Harry, she had a shower because “I wanted to look more like myself”. Does Meghan un-showered not look like herself?

The most interesting thing I read about her is that she is a calligrapher, which is a search for beauty and control. Her surroundings are important to her: Hermes blankets are neatly folded as she cries. But Meghan was the trigger, not the cause, of his semi-enlightenment: he chose her. She is not a reincarnation of Princess Diana, even if he compares her “empathy” and “warmth” to his mother’s. But he is. He cannot leave monarchy. But he cannot stay. He is half-conscious, and half-free.

He knows the inherent cruelty in monarchy because he lived it: the adamantine hierarchy, the suppression of emotion, the demand for ownership, the disconnection of family members from one another. After his mother died, when he wasn’t at school, it seems he was often alone at Highgrove with servants and police protection officers. He can attempt to atone for his “unconscious” bias – his description of his apology to the Jewish community for dressing as a Nazi was awkward, and moving, as I imagined a penitent teenage prince at an audience with the Chief Rabbi. He can call himself a feminist, and environmentalist, and it is true that, as Meghan says, his Instagram feed is filled with photographs of elephants. 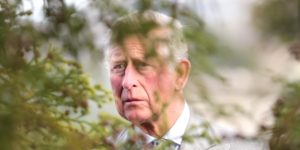 This is where he becomes ridiculous, and pitiable though: where he is half-conscious, and half-free. You cannot leave the royal family and seek to keep the status it confers on you: not if you are repentant for its racism and sexism. You cannot talk about racism and sexism and environmentalism without talking about class. The difference between healing, his obsession, and the lack of it is not just self-realisation: it is money. And he doesn’t talk about class, or money: not one word, though he watches as his wife is wound into a fantastical ballgown by four people. His self-knowledge ends at precisely the point of his complicity.  He is still a prince, with all the expectations and pomp of a prince. We can all speak the truth of our misery, but what happens then?

He knows that some things must be exposed: media viciousness and intrusion, the collusion of his family, and the country; how monarchism isn’t love, but hunger. But he can’t acknowledge that our interest in his story is part of the same culture of unseriousness and worship of power.

He thinks he has a different future now: the Sussex brand, which will run on the money Netflix has paid him to tell his story. It is red-carpet philanthropy, which is bogus philanthropy: a luminous unseeing and unhearing of its own. It does not centre the genuinely dispossessed and the desperate: it can’t. In its glib riches, its insatiable desire for attention without merit, and its commitment to the superficial, it is as dishonest as the life he has left behind.

The Cambridges and Sussexes are at war, according to the media: the next three episodes of Harry & Meghan will be aired next week, on the same day that the Duchess of Cambridge is playing the piano at a carol concert. Remember the battle of the bridesmaids’ tights, when each duchess was accused of inciting tears in the other? This is in the same vein of pettiness.

If it is a war — and the media are determined it should be — it is a war not of substance but of style. It is not about how different the brothers are, but how similar. Both remain monied, driven, and convinced of the importance of their work as a newer world sags around them. If he continues on this path, I wonder if he will ever realise not how far he has travelled, but how little.