The study of arguments is one of the thriving intellectual pursuits of a time — and is it any wonder? Social media’s business model depends on perpetual rancour and the amplification of extreme points of view. Twitter often reminds me of an old-fashioned cartoon of a bar fight: an impenetrable cloud of dust spiked with fists and boots. We argue about important things, like Covid policy, but also, with no less passion, the movie Don’t Look Up or the depiction of goblins in Harry Potter movies. We argue about how we are arguing, and we do it every day.

This field of inquiry doesn’t just include behavioural science books such as Jonathan Haidt’s The Righteous Mind and Ian Leslie’s Conflicted. James Graham’s new play Best of Enemies, currently running at the Young Vic, and Jon Ronson’s recent Radio 4 series about culture wars, Things Fell Apart, are in the same business. Both men are known for their empathy and even-handedness: Ronson has written thoughtful bestsellers about extremists and online shaming, while Graham’s work for stage and screen gravitates towards periods of disruption and division. Taken together, their latest projects shed light on the crucial distinction between debate and dialogue.

Best of Enemies is based on a 2015 documentary about a series of landmark televised debates. In the summer of 1968, the struggling ABC network decided to build its slim coverage of the national party conventions around 10 debates between William F Buckley Jr, the editor of The National Review and host of Firing Line, and Gore Vidal, the novelist and playwright. Born just a few weeks apart in 1925, both men were sons of dynastic privilege who had run for office and attained considerable celebrity, both on screen and in print, by being as combative as they were erudite. But as Buckley later remarked: “There is an implicit conflict of interest between that which is highly viewable and that which is highly illuminating.”

Casting Buckley and Vidal was a vote for viewability. For one thing, they represented not Republicans and Democrats but the most radical expressions of conservatism and progressivism: what we would now call culture warriors. Neither, for example, cared for the eventual Democratic nominee, the cheerful moderate Hubert Humphrey. Electoral strategy and policy platforms interested them less than a battle for the soul of America.

For another, they displayed mutual disgust. Each man considered the other not just dangerous but obscene. Even before the vicious exchange of slurs that made their penultimate meeting notorious, the debates were a gruesome display of smirks and sneers, sly digs and barbed crosstalk. The host, Howard K. Smith, often seemed taken aback by the heat of their animosity. Vidal dubbed Buckley “the leading warmonger of the United States”; Buckley branded Vidal “an agent for the end of democratic government”. 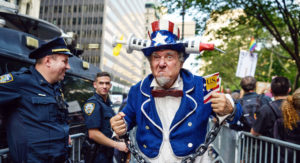 How not to talk to a science denier

The debates shot ABC from the bottom of the ratings heap to the top. In 1968, the spectacle of two very clever, eloquent men tearing chunks out of each other was a delicious novelty. Even today, in the play, many of the biggest laughs come from verbatim re-enactments of their showdowns, which Graham structures like the bouts in a boxing movie.

In hindsight, the two men’s ideas and rhetoric seem impressively hifalutin but viewers tuned in for the sizzle not the steak, and that became their legacy. To this day, broadcasters like to frame debates as a spicy clash between two irreconcilable points of view. I’m not the only journalist to have lost a radio booking by admitting that they don’t entirely disagree with the other guest; the disappointment in the booker’s voice is palpable.

On YouTube, meanwhile, the likes of Ben Shapiro and Jordan Peterson are billed as rhetorical gladiators who DESTROY and CRUSH their opponents. Vidal had it right in the final 1968 debate: “I think these great debates are absolutely nonsense. The way they’re set up, there’s almost no interchange of ideas, very little even of personality. There’s also the terrible thing about this medium that hardly anyone listens.”

Some would say that the Vidal/Buckley clash was a crass corruption of the noble art of debate; but perhaps they merely tore the mask off. The value of adversarial debate is vastly overstated by politicians and journalists who belonged to the tiny of minority of students who participated in them at university (and are rarely sound advertisements for their educational benefit) because it is ultimately a sport rather than an exchange of ideas — and a bloodsport at that.

“Competitive debating takes argument’s essential features and reimagines them as a game,” wrote Sally Rooney about her time as a star college debater. “For the purposes of this game, the emotional or relational aspects of argument are superfluous, and at the end there are winners. Everyone tacitly understands that it’s not a real argument.” Why satire gave up on politics

The American novelist Ben Lerner came to similar conclusions about his own prowess as a competitive debater in high school: “The speeches required decisiveness: clear rather than complex answers won rounds, and you learned to stud a speech with sources the way a politician reaches for statistics — to provide the affect of authority more than to illuminate an issue or settle a point of fact.” Although this experience appears to have done neither novelist any harm in the long run, Lerner did not like what the game did to him: “I became a bully, quick and vicious and ready to spread an interlocutor with insults at the smallest provocation; I dominated; I made other debaters cry.”

Debates have a place in election campaigns because the goal of both is to win and to leave your opponent, as Vidal said of Buckley, a “bleeding corpse”. More often, though, the challenge of politics is to resolve painful disagreements through dialogue and compromise. There is no perfect quip or killer statistic, flourished like a duellist’s blade, that will deliver an enduring piece of legislation. Law-making is not good television because it requires listening. Even the politicians who are most adept at Prime Minister’s Questions resent the time it consumes because its theatrical aggression has so little to do with the rest of their job.

There are better ways to talk about the issues that divide us. In Things Fell Apart, Jon Ronson tells eight stories about formative moments in the culture war which still influence how we argue today. The most popular episode is also the most uplifting. ‘A Miracle’ revisits the 1985 conversation between the televangelist Tammy Faye Bakker and a gay priest with Aids named Steve Pieters. As Peters, still alive today, relates, Bakker’s unexpected compassion built a bridge between evangelical Christians and gay men at a time of rampant homophobia and demonisation of those with Aids: “People in that audience got to see a real live human being.” Their conversation is the polar opposite of Buckley vs Vidal because Bakker really listened. (Fittingly, she is the subject of a stage musical that James Graham is currently writing with Elton John and Jake Shears.)

‘A Miracle’ chimes with ‘Many Different Lives’, which describes how a transwoman called Nancy Burkholder managed to foster a respectful (albeit short-lived) dialogue in the Nineties between the women’s festival Michfest and her fringe gathering Camp Trans. Burkholder’s guidelines for fruitful debate are so self-evidently helpful yet so rarely followed that they are worth quoting in full: “Listen carefully and remain calm and patient. Do not call anyone names or belittle their point of view or imply that they are irrational. An atmosphere of love and joy will attract people to us. Anger and hostility will turn them away. We are all on this planet trying to figure out a lot of complex stuff together.” In these episodes you can hear Ronson, a culture war pacifist, exhilarated by the possibility of breaking a deadlock.

Like any war, a culture war is a failure of diplomacy. Unlike most wars, it can never be won, whatever the noisiest and most passionate combatants would like to believe. Polls consistently show that most people don’t want to participate in culture wars, if indeed they even know what they are. They want compromise and settlement, without which a democratic society cannot function.

Binary extremism may reap viewers, clicks, followers and donations but it is also brutalising and corrupting. The more we have of debate as a game rather than debate as dialogue, the worse things get. As the conservative writer Jonah Goldberg lamented in a recent piece about January 6: “The addiction to good-versus-evil narratives pitting the honourable and decent ‘us’ against the villainous and sinister ‘them’ is as strong as ever — and there is little appetite for the kind of argument and persuasion that sustains democracy.”

Towards the end of Best of Enemies, Graham imagines the kind of honest, vulnerable conversation that Buckley and Vidal might have had when the cameras weren’t rolling: “no performing, just talking,” as another character says. It’s an instinctive bridge-builder’s fantasy of good-faith disagreement, where the goal is understanding rather than victory. Ronson’s series closes with a more explicit plea: “I think people are just exhausted by how things have fallen apart and what they’re longing for instead is connection.”

Buckley died in 2008 and Vidal in 2012. Neither sought a significant online presence. Yet it is on the internet where their 1968 desire to fight and win at any cost, to generate heat and damn the light, has become overwhelming. In the 2015 documentary, former ABC executive Richard Wald sadly observes: “Argument is sugar and the rest of us are flies.” What he doesn’t say is that the sugar is poisoned.