Was Prince Philip a player right up until the end of his life? That’s the implication made, albeit discreetly, in the latest series of The Crown, which depicts the Duke of Edinburgh’s appreciation for Penny Romsey (later Countess Mountbatten) during his latter years.

In episode two, Jonathan Pryce’s Philip tells his (much) younger blonde friend Penny: “The one thing human beings do the minute they make a commitment to a life together” is “grow in separate directions”. His imagined advice to the vulnerable Diana (preparing to detonate her Andrew Morton “bomb”) is even more incriminating: “Be creative… you can do whatever you want, you can make whatever arrangements you need to find your own happiness”, as long as “you remain loyal to your husband and loyal to this family in public”. But the show doesn’t dare go further.

Likewise Philip’s marriage to Elizabeth has always been a tough subject for biographers. There is no hard evidence that Philip was unfaithful, and while Her Majesty was still alive the issue was all the more sensitive. This may explain the strange detour in Gyles Brandreth’s otherwise excellent biography Philip, the Final Portrait. Promising an interrogation of the Duke’s reputation as a womaniser, Brandreth seeks to establish what Freud would have made of Philip’s female-heavy early childhood. (He was a longed-for son arriving late into a family of four girls.)

Brandreth explores the hypothetical possibility of Philip having “penis awe”, perhaps even “phallic swagger” — both conditions which apparently stem from disproportionate female attention and devotion when young. He tells us what we already know: that Philip liked the company of young attractive women, but his discussion with a Freudian psychologist is inconclusive. Apparently, men with “phallic swagger” aren’t always serial adulterers.

Had Brandreth really wanted to land a psychobabble blow, he would have looked into the male role models in Philip’s life. There was his father’s failed marriage and glamorous lady friends in the Riviera, his uncle Lord Mountbatten’s notoriously “open” marriage, not to mention his Greek uncle Big George and Marie Bonaparte’s “unconventional” relationship. Monogamy did not have much currency in the Duke’s wider family.

In many respects Elizabeth and Philip’s marriage was in keeping with the pair’s pedigree, upbringing and exceptional status. What went on behind closed doors in their marriage is a moot point and one which has disproportionately focused on the importance of monogamy at the expense of arguably greater goals — an enduring marriage and stable family monarchy.

Aristocrats have long played by different rules, and in the first half of the 20th century, when marriages were often undertaken for practical and dynastic reasons, an exclusive physical relationship was rarely a prerequisite for a lasting union. Between the wars, commentators promoted the idea of emotional and spatial independence in marriage. In 1935 co-founder of the National Marriage Guidance Council, Edward Griffith, recommended “the independence of each must be guaranteed”. Others were more explicit: “A woman may love her husband with all her heart, but even love needs an occasional rest.” And those women, invariably without an income of their own, had to shut up and put up. 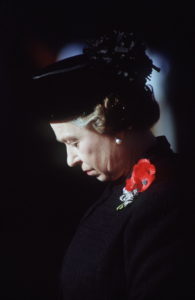 Can the nation survive Elizabeth?

But times were changing fast. Service girls, having enjoyed rare freedom outside the domestic arena during the war, bought into new idealised notions of a companionate marriage. These modern unions were based on affection, friendship, and sexual gratification; it was anticipated that a spouse would meet all of their partner’s emotional and physical needs. Or as a panellist on the 1954 Royal Commission of Marriage and Divorce put it: “We are coming to expect more and more of our marriages.” It was these expectations that meant “marriages today are at risk to a greater extent than formerly”.

Take 99-year-old Daphne Attridge for instance. As a young woman, she served in the female army (ATS) during the war and keenly followed Philip and Elizabeth’s love story. Like many, she got engaged during the conflict (and promptly unengaged). Until she found her perfect man, she pinned her romantic hopes vicariously on the royal couple’s relationship. “We wanted to know they were in love. That mattered to us.”

This post-war companionate model of marriage has endured, but marriages in general have not necessarily. As the Commission predicted, higher expectations led to greater disappointment and a rapidly rising divorce rate. Despite the best efforts of both church and state, marital breakdown quickly became a hallmark of modern living, with Elizabeth and Philip’s union an almighty exception. But then, they were playing by different rules, weren’t they? There is no doubting the late Queen’s devotion to her husband; she was sticking press cuttings about sailor Philip’s wartime adventures into her scrapbook aged 14. As for the nomadic Prince, steadfast Elizabeth was a game-changer. However, their union lent heavily on more independent models of marriage in vogue in the early 20th century: Elizabeth did not hang out with Philip’s “funny friends” who entertained him in Soho supper clubs, at Cowdray Park playing polo, and on (and off) the River Solent. She avoided Cowes Week “like the plague”, pursued separate equine hobbies, had agency and income that vastly outstripped her husband’s and slept in her own bedroom. (According to the author and campaigner Marie Stopes, interwar champion of Married Love, the latter was a sensible move. Apparently separate bedrooms prevent “everyday association” which “tends to reduce the keen pleasure each takes in the other”.)

By all accounts, even Charles was irked by his father’s latter-day friendship with Penny; perhaps he was also miffed that there had been a spread featuring 13 women in Tatler, entitled “The Duke of Edinburgh’s Fan Club”. And yet somehow, in both cases, Philip got away with his reputation enhanced: a raffish old man at worst. Who could resist the outspoken Duke in his dotage, stumbling around Sandringham, riding carriages with his sometime blonde companion and driving when dangerously old? Like his father, Charles had also inherited Mountbatten as a pre-marriage mentor, but with very different results. Times had irrevocably changed. The posh propensity to turn a blind eye no longer washed in a society where divorce was prevalent, and modern celebrity promised riches outside the royal club.

Elizabeth and Philip’s union was forged in a different age, when commitment to monarchy and marriage trumped everything else. Ultimately their 73-year union not only stood the test of time, it was a great success, and one which the couple were justifiably proud of. The Queen, never an open book, divulged her tips for a successful marriage in 1972 — the year of the couple’s Silver Wedding anniversary — explaining that a Christian marriage should be “tolerant and understanding”. Fifty years later, the Duke confirmed the Queen had “tolerance in abundance”.

Exactly what that says about the dynamics within our late monarch’s marriage is open to interpretation, as the Duke no doubt intended. After all, Elizabeth and Philip came from an old-fashioned school of thought — it was important to be seen, but, where possible, royalty should not let in too much “daylight upon the magic”. As Walter Bagehot explained, “its mystery is its life”.