British conservatism, as a political force and a philosophical creed, is dying. Brexit has failed. The Tories face destruction at the next general election. Demographically, conservatism faces extinction in the decades ahead.

If it has any future at all it is being formed at the Reasoned Student Summit in the City of London’s Dutch Hall. Reasoned is the YouTube soapbox of the Brexit campaigner and pundit Darren Grimes. Today, Grimes has managed to gather around a hundred young conservatives — about 19% of 18- to 24-year olds voted Tory at the last election — to network, and to listen to Nigel Farage, Steve Baker and Daniel Hannan. The outlines of a new conservatism — despairing and angry — can be glimpsed here.

Trembling in his tweed blazer, John is 23, and worried, like many on the Right’s youthful fringes, about central bank digital currencies.

Soon, he believes, the Bank of England will track your movements, monitor your spending, and push electronic tentacles into every aspect of your life. John tells me that such currencies will be “China’s social credit system on steroids”. He has the luxury of believing that this depressing moment in British politics is something bigger and scarier — a totalitarian dawn. “If we could go back in time, you know, we would do something about Hitler.” He thinks the same of the Bank of England.

John’s talking points are paranoid and his outlook is bleak. He is representative, not of the young Tories who hole up in the Carlton Club or hand out leaflets for Blue Beyond, but those who form conservative opinion online. They are not yet a movement, like the National Conservatives or the “New Right” in America, though in their frank apocalypticism, stridency, and saturnine sense of embattlement, they are heavily influenced by both.

They remain, in organisation and physical appearance, embryonic. There are trad aesthetes and High Tory Anglicans, young fogeys and BNP haircuts, Turning Point UK influencers, Scrutonians and boys who just love Peter Hitchens. Among this hundred students and recent graduates, there are dozens of ideological tribes. But whether they are suited or slobbish, at Russell Group universities or without a job, what unites them is a sense that Britain is declining. This anger is what flourishes when a generation believes it will be far worse off than its parents.

Welcome to the Tory apocalypse

Like Hitchens, the young men in this room think Britain has been abolished, and that the Conservative Party is not conservative at all. Ambient British culture — whether it is Ru Paul’s Drag Race or footballers taking the knee — bristles with personalities and causes that unsettle them. They see “wokeness” as a virus, infecting every aspect of British culture.

This is why they love Nigel Farage. In 2016, he proved to them that conservatives — real conservatives — could beat the Left-wing establishment. They are anxious teenagers; Farage is their feckless uncle. As soon as he takes the stage he enters freewheeling bombardier mode. The theme of his speech, pockmarked with jokes, is Brexit: A Revolution Betrayed. “Theresa May”, he says, rolling his eyes, well her deal was the “closest thing to treachery I have ever seen. Maybe the Tower of London shouldn’t be a museum exhibit. Don’t quote me on that for God’s sake. I’m in enough trouble as it is…”

Farage is in trouble with all the right people. His enemies, listed at length — the Today programme, ESG, corporation tax, Jeremy Hunt, Tory wets, Westminster generally and the House of Lords specifically — are their enemies too. He describes listening to Radio 4 as “agony”. This is conservatism as hay-fever. Irritant Lefty spores are everywhere; they make you ill, angry, prickly. 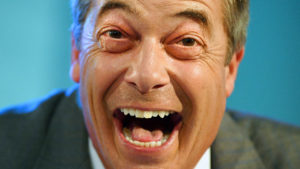 How Farage had the last laugh

He tells his story about Brexit. He wanted Britain to become “a genuine global trading power again”. Now, after six years of political bloodletting, we have returned to 2010. Globalists in the treasury, Osbornomics in the ascendant, austerity back on the menu. “The great unwashed” and “the silent majority” are ignored once more. “We are back to where we were before the referendum”. The ancien régime has fluttered back in, deathless as a vampire. To whoops, Farage promises a “third coming” — a return to frontline politics — if the state of the nation keeps deteriorating. One better than Jesus.

Their love for him cannot be understated. “Nige, big, big fan” is the way they frame their questions to him. Yet Farage, beyond his Brexit boosterism, is so unmistakably Eighties. His agenda, where it rises above being a disgruntled mood, is not theirs. A global free trading power? At least half of the audience is protectionist, restrictionist, anti-globalist. Farage calls on them to be “happy warriors”, but they are pessimists. Do they want more unreconstructed libertarianism?

I doubt it. They are not like Farage: Thatcher’s children — they are his children. They like Farage’s positions on British identity and borders, not markets. They hoot their affection at Farage, not for what he says about free trade but for the way he says it. Farage gave them 2016, and that year was their political awakening. They would follow him into the deepest ditch if that was what he asked of them. His insurgent energy is undiminished, his pugnacity undiluted, his rhetoric undaunted in the face of all those enemies. More than any Tory in parliament, and though they do not agree with everything he says, Farage inspires this generation of conservatives.

The last days of Jeremy Corbyn

When an actual MP arrives — Steve Baker — the contrast with Farage is sharply apparent. A third of the audience goes outside to vape. His role during the Brexit years made Baker a liberal hate figure — recently called a “cunt” by Channel 4’s Krishnan Guru Murthy. But in this room he is not Right-wing enough. He is accused of promoting, to loud and prolonged applause, “Marxist Identitarian politics” through school reading programmes in his constituency. “I don’t know why you’re applauding that,” Baker says, forlornly.

Baker’s crime is to be involved with the 2022 group of senior black conservatives. They are Tories who are trying to devise ways of shedding the perception among black people in Britain that conservative politics is “toxic”. Baker told the group at Conference this year that “footballers taking the knee isn’t a neo-Marxist act, it’s a statement of solidarity”.

Today, Baker attempts to extract the better sides of these young men from their blatant nihilism. “We have to think about our moral centres… some of the things I’ve heard today are dangerous.” It doesn’t work. The young conservatives are not interested in being nice.

When I find him after his speech, Baker is close to despair. Youth politics, whether on the Left, or the Right, is wreathed in gloom. He understands that young people in Britain have the rawest deal. But Farage, who captivates them, only offers “easy answers… a populist shadow of libertarianism”. Baker broods about the room’s “radical aggression” on migration. (There are calls for the borders to be shut down completely from the crowd.) The young, unjustly treated, are “turning to radical ideologies”. Baker worries about them. He is right, but has no idea what to do. Baker cannot see that these young men are as much his responsibility as Farage’s. He is just as complicit in their radicalism. They are the Brexit generation, coming of age.

This generational divide that Baker senses and Farage seems unaware of, becomes ever more apparent. The speakers are less furious than the spoken to. The crowd are unimpressed with another Brexiteer, Dan Hannan. The libertarian boilerplate of his speech, a Trussian paean to enterprise culture and tax cuts, is shredded in the Q&A. “I come from a more tribal school of thought,” says one of the boys. To him, identity matters more than economics. “If everything is more globalist, then everything will move to London, and my community in East Bradford will become even more of a dump.”

Hannan has no convincing counter-argument. He just looks depressed. Like every successful revolutionary, Hannan was discovering that the people are not what he thought they would be once he had unlocked them from their cage.

Outside, the boys are smoking and giggling. “We need our own Nick Fuentes,” says one. British conservatives, he says with vehemence, whether they write for the Telegraph or are on the staff at CCHQ, are “spergs”. Like most of the summit, he looks to the American Right for a model. They are more splenetic, more successful, more based. The idea that Baker had been going on about — that it takes strength to be gentle and kind to strangers — is ludicrous to him. There is none of that “bullshit” in America.

These young Tories are stripping the American Right for parts. They believe that until the British Right comes out fighting, it will keep losing the culture. Hard-line positions on migration and identity must be found. Cultural enemies must be identified, then ridiculed. For them, politics is about figuring out who hates who, then sharpening those hatreds into flints. “Once the States are taken back,” one lad says, once Donald Trump wins again, “it will influence conservatives here. Then the Tories will stop being so shit.”

How the Tories were radicalised

Not all of these young conservatives will end up in politics. I suspect the one who stood up and asked, gesturing to the sub-Brideshead outfits sitting around him, “How do we make ourselves cool?”, won’t stay the course. But others here want to be journalists, or pundits like Darren Grimes, or to enter the Conservative Party. They want to shape it from within. Soon enough their foetal moods and ironic tweets will be coherent policies, newspaper editorials, and viral clickbait videos.

Do not expect them to sculpt a future of fair dealing, pragmatism, patience, moderation or high intelligence. Expect the restless opposite of these virtues. A generation in the image of Nigel Farage, not Jeremy Hunt. A recent poll found that 61% of 18- to 34-year-olds supported “a strong leader who doesn’t have to bother with parliament/elections” taking control of the UK. If the 2020s really are set to be the first decade of an “Age of Scarcity”, then expect a conservative politics harsher than whatever today’s cabinet ministers can come up with.

The macabre populist shadows Steve Baker fears will become solid one day. Only a fool would try to predict what happens then.