Yvan Colonna, a Corsican terrorist and shepherd, was once regarded by the French state as its Public Enemy Number One. Paris is now praying that he will stay alive.

Colonna, 61, has been in a coma for a fortnight after being savagely beaten in France’s highest security jail by another inmate — an Islamist terrorist. Since he was beaten and suffocated almost to death, anti-French riots have engulfed several Corsican towns. If he dies, local politicians warn, the violence could explode into a “generalised revolt”.

The latest riot, in the northern town Bastia on Sunday, was the most violent event in the Mediterranean island for decades. At least 7,000 people — equivalent to one in nine of the town’s population — laid siege to government buildings.

The prefecture, the local tax office and the post office were all set alight. More than 650 Molotov cocktails, as well as pétanque balls and agricultural bird-scaring rockets, were hurled or fired at riot police. They replied with more than 4,000 stun grenades, before running out of ammunition and being forced to retreat to their barracks. One gendarme was shot in the neck with a hunting rifle.

Amid this chaos, the French interior minister, Gérald Darmanin, arrives in Corsica today for two days of emergency talks with the island’s government, which seeks greater autonomy from Paris. With the French presidential election less than a month away, with war raging in Ukraine and with the Covid pandemic showing signs of reviving, the last thing that President Emmanuel Macron needs is a violent rebellion in Corsica.

But why such violence now?

The best known of the jumble of Corsican armed separatist groups, the Fronte di Liberazione Naziunale Corsu (FLNC), gave up its “armed struggle” in 2014. Four years later, a single government for the island with expanded powers was created, run by a coalition of “autonomists” (people who want more independence within France) and “separatists” (those who want complete independence from France). 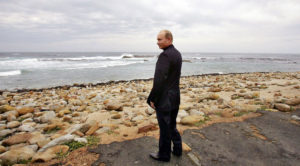 In 2017 the Macron government offered steps towards greater autonomy (without using that word). But its proposals were blocked as unconstitutional by the centre-right majority in the upper house of the French parliament, the Sénat. Nothing much has happened since then.

So frustration has built, especially among many young Corsicans who look back to the “independence struggle” of the Eighties and Nineties as a golden age. They have embraced the identity politics of the 21st century: unlike their parents, they reject any element of “shared” French-Corsican identity. They see themselves as the oppressed colonial subjects of France.

Many of Sunday’s protesters were students or school children — although most of the violence came from a roaming band of 100 or so older people wearing black hoods. For these younger generations, Colonna, a convicted murderer, is a folk hero — a Corsican version of Bobby Sands.

“The young feel themselves exalted by this struggle,” said Professor Xavier Crettiez, an expert on political violence in Corsica. “Nationalism has acquired an aura for many young people, which has become mythified as the years go by.”

Corsica won its independence from Genoa in 1755 and installed the first fully democratic system of modern times, two decades before the United States. The island was conquered by France in 1769 during a brutal war but reclaimed its independence during the French Revolution. In an attempt to keep the French at bay, Corsica formed an unlikely “union” with Great Britain for three years up to 1796.

Although French for over two centuries now, Corsica does not “feel French” — not for many Corsicans and not for visitors. It has its own language, related to Italian, and is controlled by a secretive family clan system, rather like Sicily or Sardinia. Although political violence has almost vanished, the murder rate remains twice as great as in France as a whole.

To be a working shepherd and an active terrorist could happen in only a few places in the world, including the well-named Ile de Beauté. Colonna’s status as a folk hero is puzzling to outsiders, and also to many Corsicans, but says much about the attitudes of some on the island to violence, to politics and to France. Putin has secured a Macron victory

After four years on the run, Colonna was convicted in 2006 of murdering, with two associates, the most senior French official on the island, the Prefect Claude Erignac. In 1998, Erignac was shot three times in the back while walking to the opera in Ajaccio with his wife. He had challenged the impunity of the Corsican criminal clans which were deeply entwined with — though not wholly responsible for — the mostly low-level separatist violence of the Eighties and Nineties.

Colonna has consistently proclaimed his innocence but his conviction has twice been upheld on appeal. Among young nationalists, there is widespread belief that Colonna was both not guilty and a courageous fighter for Corsican freedom. How can he be at once innocent and a freedom fighter? This contradiction is rarely addressed by his young worshippers.

Paul-François Paoli, a cultural writer and historian of French-Corsican relations, told Le Figaro: “Colonna doesn’t represent all Corsicans but that part of Corsica which sees itself as exclusively Corsican… If there was a hero in this tragic affair, it was Prefect Erignac who was doing his duty in fighting against the power of the mafia, which has since strengthened its stranglehold on the island.”

There is, however, another reason why Colonna’s near-death has caused such a furious and violent reaction. Part of the much-splintered Corsican nationalist movement is anti-Muslim. Many other Corsican separatists accuse France of being more tolerant of Muslims than Corsicans.

It was unsurprising, then, that they seized upon the fact that Colonna’s assailant, Franck Elong Abe, 36, is a Cameroon-born Islamist, who was originally arrested by US forces in Afghanistan and transferred to a series of French jails. Abe also had a record of violence against other prisoners, but was nevertheless made the overseer of the gym at the high security prison near Arles. According to French media reports, he was at one time friendly with Colonna and they played table-tennis together.

Their relationship was not to last. On March 2, Abe beat and suffocated Colonna when they were left alone by prison guards for eight minutes. His motive remains unclear, though reports suggest that Colonna may have made insulting remarks about Islam.

Whatever the truth, some of the rioters in Corsican towns accuse the French authorities of allowing Abe to kill Colonna — or at the very least of culpable negligence. The march in Bastia on Sunday assembled behind a banner reading in Corsican, “French state assassins”.

Paul-François Paoli said: “The fact that he is an Islamist poured oil on the fire… It suggests to some people that the French prison service is kinder to Islamist terrorists than to Corsican nationalists… And it’s not a big step from thinking that there was a plot to eliminate him. And those Corsicans who already made Colonna a hero now have an excuse to make him into a martyr.” There is another Corsican oddity to the Colonna saga. The shepherd-terrorist had three principal lawyers during his three trials. One has since been blown up in his car, in what was presumed to be a mafia hit. Another, the moderate nationalist, or “autonomist”, Gilles Simeoni, 54, has become head of the unified Corsican government which was created in 2018. The third Eric Dupond-Moretti, is Justice Minister in the present French government. Simeoni will be at the heart of the talks with the interior minister, Gérald Darmanin, today or tomorrow.

Before leaving Paris, Darmanin said his government had “heard the demands of elected Corsican politicians on the island’s institutional, economic, social and cultural future”. He was ready to launch an “unprecedented cycle of discussions” on the “evolution of Corsica within the Republic, according to the requirements of the Constitution”. Darmanin added, however, that such discussions could only happen if the violence ended.

Each word was carefully chosen. The Macron government is offering to resume progress towards a more autonomous status for Corsica, but the centralising French constitution — which speaks of “one indivisible” republic — puts limitations on what can peacefully happen.  But while polls in the past have suggested that only a small minority of Corsica’s 350,000 people want complete independence — not least because the island’s public services and transport links are heavily subsidised by French mainland taxpayers — support for greater autonomy is growing.

Gilles Simeoni, the head of the Corsican unified government, is trying to harness a volcano but also risks being destroyed by it. The violent unrest has brought the Macron government back to the table but Simeoni’s vision of a kind of Scottish or Catalan devolved status for Corsica could be swept away by an explosion of more extreme, nationalist feeling.

Simeoni said this week: “We need a political process at the highest possible level. When a logic of serious confrontation begins, as we have seen with young people (in Bastia), a grave incident could happen at any moment. We are not immune from a generalised revolt.”

Nothing much can happen before the French election is over on 24 April. Macron is heavily distracted by the campaign and by the Ukraine war. The talks, if they begin, will take months. The secular French state is praying that its former Public Enemy Number One will now do a great service to the state that he detests. All he needs to do is to carry on living.