The West has been struggling for the past three weeks to understand the motivation behind Putin’s invasion of Ukraine. Was it a rational move or the reaction of a madman? Some insist he has been inspired by some sort of éminence grise — a sort of Rasputin figure. But it’s not that straightforward.

There is no one “guru”. The reality is more complex: there are multiple ideological sources who have blended to cause the disastrous invasion, all mediated through his “court” of  trusted people and group of military advisers, and many of whom unite in their vision of Ukraine as a country that needs to be brought back by force into Russia’s orbit.

During his Valdai Club address — the Russian equivalent of the elite talkingshop, Davos  – in September 2021, Putin referenced three influential authors: the emigrant religious philosopher Nikolay Berdyaev, the Soviet ethnologist Lev Gumilev, and the reactionary thinker of the White émigré community, Ivan Ilyin. Putin has never given much away about his Berdyaev readings, but he has been more explicit on the other two.

Putin has borrowed from Gumilev his two most famous concepts: first, the common historical destiny of Eurasian peoples and Russia’s genuine multi-nationality, as opposed to Russian ethnic nationalism; and second, the idea of “passionarity” – a living force specific to each people group made up of biocosmic energy and inner force. As Putin stated in February 2021, “I believe in passionarity, in the theory of passionarity … Russia has not reached its peak. We are on the march, on the march of development…We have an infinite genetic code. It is based on the mixing of blood.”

While Gumilev has been a commonplace reference of post-Soviet culture; Ivan Ilyin has remained much more marginal. His recent rehabilitation has been pushed by a group of reactionary thinkers and politicians who want to decommunise Russian history.

Putin has, on several occasions, referred to Ilyin’s vision of Russia’s supposed unique destiny and the centrality of state power in Russian history. And he has certainly also noticed Ilyin’s furious hatred of Ukraine. For Ilyin, Russia’s enemies will try to pull Ukraine out of Russia’s orbit by hypocritical promotion of democratic values with the goal of making Russia disappear as a strategic opponent. As Ilyin wrote, “Ukraine is the region of Russia [sic] that is most in danger of division and conquest. Ukrainian separatism is artificial, devoid of genuine foundations. It was born from the ambition of its captains and international military intrigue.”

Yet to ascribe Putin’s vision of Ukraine solely to Ilyin is to fail to understand that it is commonplace for Russian thinkers to say that Ukraine is an indivisible part of Russia and one of its Achilles heels in its confrontation with the West. The ideological founding fathers of Eurasianism in the Twenties were also virulently anti-Ukrainian: the prince Pyotr Troubetzkoy denounced Ukrainian culture as “not a culture but a caricature”, and Georgy Vernasky explained that “the cultural schism [of Ukrainians and Belarusians] is only a political fiction. Historically speaking it is clear that both Ukrainians and Belarusians are branches of a unique Russian people.” This is a brotherly enmity, and one with many sources.

Among the contemporary ideologists, Alexander Dugin is also excitedly cited by Western observers as a strong influence on Putin. And Dugin has, indeed, always been a virulent enemy of an independent Ukraine (“Ukraine as a state has no geopolitical meaning,” he wrote in his Foundations of Geopolitics). He called for its almost complete absorption by Russia, letting just the most western regions of Ukraine remain outside Russia’s purview.

But Dugin does not have the ear of the Kremlin. He is too radical in his formulations, too obscurely esoteric and cultivates a level of “high” intellectual references to the European far-right classics that cannot meet the needs of the Putin administration. He was one of the original promoters of a geopolitical notion of Eurasia and of Russia as a distinctive civilisation in the Nineties, but these themes became mainstream apart from and even against Dugin’s use of them in the following decades. He was never a member of any of the many co-opted civil society organisations, even if he was able to cultivate to some patrons in the military-industrial and security services circles.

Among the other thinkers advocating for Russia’s imperial mission are two of Dugin’s patrons: the Orthodox monarchist businessman Konstantin Malofeev, who leads the Tsargrad internet channel and the Katekhon discussion group; and Bishop Tikhon, an influential figure of the Russian Orthodox Church, rumoured to be one of Putin’s confessors.

Both men have worked together to advance a reactionary agenda in terms of “traditional values” (anti-abortion, pronatalism, militarism, cult of Byzantium as the historical role model for Russia, and heavy ideological indoctrination of younger generations) and try to get the ear of the Kremlin. Malofeev has become a central figure in Russia’s outreach to the European far-Right and aristocratic circles, while Tikhon focuses on bridging the gap between the Church and the Kremlin and ensuring their ideological convergence. This brings us to the Moscow Patriarchate, the institutional body of the Russian Orthodox Church, which has always remained ambiguous in its stance toward Ukraine. On one hand, the Church promotes the notion of canonical territory — that is, the fact that the spiritual territory of the Church is broader than the borders of the Russian Federation and encompasses or encompassed Belarus, parts of Ukraine, and Kazakhstan. In the Church’s worldview, all Eastern Slavic nations form one historical nation with Kyiv as its spiritual cradle. The Church has preceded by a long time Putin’s embrace of the idea of Russian-Ukrainian unity as he declared in his 2021 article. But because the Patriarchate had so many of its parishes in Ukraine, it had also to recognise Ukraine’s sovereignty as a state and tried to avoid the ecclesiastical independence of the Ukrainian Orthodox Church, though this was eventually recognised by the Constantinople Patriarchate in 2018. While we can’t be sure how genuine Putin’s religiosity is, he certainly believes that Russia’s own civilization relies on Orthodoxy as a central cultural kernel.

To this should be added the notion of “Russian World”, vividly promoted by the Church. Originally, the term was meant to promote a deterritorialized Russia, for whom the imperial territory wouldn’t matter anymore, but the notion gradually transformed to express Russia’s narrative about the mission of reuniting “Russian lands”, to which Ukraine would belong.

There are also more underground figures of influence: one of Putin’s closest friends, Yuri Kovalchuk, is known for his conservative and religious views of Russia’s greatness. Kovalchuk is one of the most secretive personalities of Putin’s inner circles, without any status in state institutions. He is the largest shareholder of one of Russia’s main banks, Rossiya; controls several major media channels and newspapers; is said to be Putin’s personal banker; he has built the president’s main palaces. Putin spent a large part of the Coonavirus lockdown with Kovalchuk, who seems to have inculcated in him the idea that history matters more than the present and that Putin needs to think of his own legacy in Russia’s long-term history.

But even if we could pinpoint the figures who yield doctrinal influence over Putin, that won’t capture what drives him to action, because ideological worldviews are always shaped by broader cultural features than just specific readings.

The whole Soviet culture has produced over the decades contemptuous narratives on Ukraine’s supposed lack of clear geopolitical identity, painting the region (not even a country: in Russian, Ukraine means “periphery”) as endlessly swayed between competing patrons over the course of centuries. It has cultivated the vision of a deeply entrenched Ukrainian nationalism that was never really “cleansed” of the stain of its collaborationist tendencies during the Second World War and its anti-Semitism. These tropes were part of the political toolkit of the Soviet regime, which repressed many Ukrainians in the name of their “(bourgeois) nationalism”. They were also shared on a more apolitical level through jokes about Ukrainians as “Banderovites” —Stepan Bandera being the main figure of Ukrainian nationalism and collaborationism during the war period. 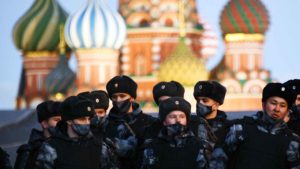 These have been updated and re-weaponised in the current memory wars that pit Russia on one side against Poland, the Baltic states, and Ukraine on the others, and which have been fought over since the turn of the Millennium. On the Russian side, these memory wars have accelerated the securitisation of history: since 2012, myriad laws have attempted to institute a historical truth of Russia as the main hero of the 1945 victory, and downplayed the Soviet-German Pact of 1939-1941 and the invasion of the Baltic states along with parts of Poland, Finland, and Romania. They have also punished any alternative remembering of the Second World War or any questioning of the legitimacy of the Soviet leaders’ decision-making.

This securitisation reached its highest level with its engraving into the Constitution, whose new 2020 amendments proclaim that the state protects the “historical truth”. Many state institutions, such as the Military Historical Society, have been playing a central role in hardening memory wars and, therefore, in feeding Vladimir Putin with narratives on Ukraine’s supposed Nazification.

It is also worth remembering that presidents, even authoritarian or dictatorial ones, do not live outside their own society’s cultural frameworks. Putin has regularly shared the music and the films he likes to watch — Soviet spy classics and contemporary bands with a strong patriotic accent — and one can guess he is watching television. 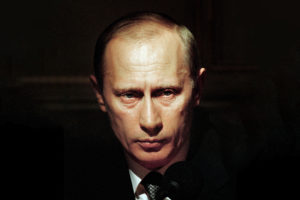 Like many of his fellow citizens, he is thus probably saturated by political talk shows cultivating anti-Ukrainian feelings, as well as by patriotic movies celebrating the Russian Empire’s greatness and its territorial conquests. There may be no need then to look for a doctrinal text that would have inspired him, as the memory of Russia’s empire and the subordinated role of Ukrainians in it permeates so many components of Russian cultural life.

Putin’s worldview has been built up over many years, and is more shaped by his personal resentment toward the West than by any ideological influence. Readings of the classic works of Russian philosophy which insist on Russia’s historical struggle with the West, emphasise the role of Ukraine as a civilizational borderland between both, have simply reinforced his own lived experience.

So Russia’s decision to invade Ukraine doubtlessly has a highly ideological component, but there is another side to this war coin: low-level intelligence-gathering on Ukraine. Both military advisers and security services seem to believe the war will be an easy win. And it is here that the President’s mask slips. It becomes clear that Putin is an aging and isolated authoritarian leader surrounded by advisers afraid of bringing him a realistic assessment of the likelihood of victory, thereby accelerating Russia dragging a sovereign Ukraine along with the rest of Europe towards the worst catastrophe since the Second World War.