Late last week, 50 Venezuelan migrants arrived by plane in Martha’s Vineyard, the summer getaway for America’s rich and powerful. Their presence on the island — a liberal haven that has been untouched by the ongoing border crisis — was the work of Florida Governor Ron DeSantis, who had sent them in rebuke of Massachussett’s “support for the Biden administration’s open borders policies”. As if on cue, Ken Burns, director of a recently released documentary about the Holocaust, appeared on CNN to agree that DeSantis’s Martha’s Vineyard stunt raised eerie parallels with the subject-matter of his film.

The media comparing DeSantis with Hitler for making rich liberals live with the consequences of their ideas? The headlines write themselves.

It was a characteristic bit of political theatre from DeSantis. Over the past year, the governor has firmly established himself as the main Republican challenger to Donald Trump by picking fights with the national media on issues such as Covid, critical race theory, and gender ideology. His pitch to the base: I’m like Trump, but better — more focused and competent, less embarrassing. Supporters and detractors alike have taken to calling him “Trump with a brain”.

Earlier in the week, I’d seen DeSantis speak at the National Conservatism conference in Aventura, Florida. “NatCon”, as it’s known, is a yearly gathering of nationalist politicians, activists, and journalists organised by the Edmund Burke Foundation and loosely aligned with what has come to be known as the “New Right”. DeSantis gave a nearly hour-long speech at the conference’s opening dinner, rattling off his achievements — banning vaccine passports and mask mandates, keeping Florida open during the pandemic, taking on the liberal media and Disney — in front of a sympathetic crowd. “It was the best speech I’ve ever heard by an American politician”, one British guest gushed.

The whole conference was something of a coronation for DeSantis among the New Right intellectual crowd. At one busy panel, one of his aides, Christina Pushaw, urged Republican politicians to stop granting access to the “Democratic activists” in the mainstream media. The notoriously crotchety paleoconservative Paul Gottfried, a past critic of “populism” and of NatCon, offered a highbrow endorsement of the governor. Quoting Karl Mannheim on conservatism as a “socially situated” movement in defence of a concrete way of life, he praised National Conservatism as an embryonic mass movement and DeSantis as the first leader in years with “a plan to go after the Left”.

Mentions of DeSantis’s main 2024 rival — and the former object of nationalist affections — were, by contrast, few and far between. When the Claremont Institute’s Tom Klingenstein declared, in a rambling speech, that “we were blessed to have Trump”, he was met with tepid applause. Meanwhile, complaints circulated about a day one talk given by pro-Trump journalist Julie Kelly on the plight of the Jan 6 defendants (“Why bring that up here?”, one attendee hissed). 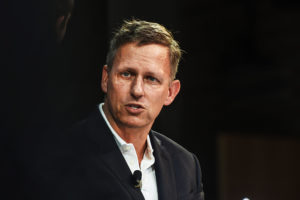 Not everyone was pleased with this passing of the torch. “Ron is such a fucking lib,” I heard one young man complain to his friend the morning after the speech. Beneath the general enthusiasm for DeSantis, there seemed to be a fear that the energies released by Trump, often destructive but also full of possibility, were in danger of being domesticated.

The first National Conservatism conference, in 2019, had been an attempt to provide some coherence to the Trump-curious wing of the Republican intelligentsia. Like the president it had gathered in support of, that conference was chaotic, controversial, and heterodox in good and bad ways. Tucker Carlson delivered a speech entitled “Big Business Hates Your Family”, while a string of speakers affiliated with the journal American Affairs offered wonky blueprints for nationalist economic policy. The headlines, however, were supplied by Penn law professor Amy Wax, who gave a talk on the need to consider “cultural distance” in US immigration policy. “In effect,” Wax explained, this would mean “taking the position that our country will be better off with more whites and fewer nonwhites”. Conference organiser Yoram Hazony was forced to take to Twitter to defend against accusations of white nationalism. As Pushaw put it: “If you’re explaining, you’re losing.”

This year’s edition, by contrast, was a tamer and more professional affair. The attendees skewed young, bookish, and religious; in the hallways, one heard earnest talk of a “new Apostolic Age” and the errors of Carl Schmitt. Any liberal would have found plenty to describe as “chilling”. But there was no repeat of l’affaire du Wax, and little hint of what V.S. Naipaul used to call “racial passions”. The talk, in the panels and plenary sessions, was of more conventional Republican fare: “woke communism”, religion and the public sphere, pornography and transgenderism, the corrupt media, the threat of China and the deep state.  “I’m trying to figure out how National Conservatism is different from regular conservatism”, one editor remarked to me. “I mean, the Heritage Foundation is funding this thing.”

I heard versions of this question a few times. For all the vitriol directed at the Republican establishment, many attendees seemed confused about what the NatCons would do differently from the current party leadership. One Trump supporter suggested that the conference was “controlled opposition” — an attempt to divert anti-establishment energies into a DeSantis presidency that would be heavy on culture-war red meat but would otherwise revert to the pre-2016 status quo. “Have you noticed that none of our nationalists are actually from here?”

This was an obvious dig at Hazony, who is from Israel, and at the seemingly ubiquitous Hungarians, who, outside the main conference hall, manned booths for the Danube Institute, the Mathias Corvinus Collegium, and the Hungarian Conservative. It also hinted at more domestic tensions that partly overlap with the “Ron vs. Don” fault line.

The core constituency for Trump’s populist-inflected nationalism was what the scholar Walter Russell Mead has referred to as “Jacksonian America”. That’s a way of saying white Protestants, many of them of English or Scots-Irish descent, who have been in the country so long that they list their ethnicity simply as “American”, and who tend to suspect that elites lack their single-minded loyalty to the country. Part of Trump’s appeal to these voters, as Christopher Caldwell has noted, was that he was so despised by elites that he “wouldn’t be able to sell out to them even if he wanted to.” With DeSantis, they feel there is no such guarantee.

Conservative intellectuals, by contrast, have long skewed more Catholic and Jewish, with some more recent infusions from post-1965 immigrant groups. Aside from the raw nativism and anti-Semitism present on the far-Right, there are fears, to some extent unavoidable in a diverse society, about who can be trusted to represent whom. Paleoconservatives, now tentatively being welcomed back into the party fold, have always complained about what they see as Israel’s undue influence over the GOP; more recently, there has been the pull exerted on Catholic intellectuals — heavily represented at NatCon — by “integralism”, which maintains that the government of the United States should be subordinated to the Church. For the hard core of Trump’s nationalist support, there is a constant fear that party leaders will attempt to rope them into serving as footsoldiers for someone else’s crusade.

“Yoram is very aware of these issues”, one older attendee told me when I relayed the dig about foreigners. And indeed, this year, for the first time at NatCon, Protestants seemed to have pride of place. Albert Mohler, the president of the Southern Baptist Theological Seminary, delivered the conference’s closing address; and Kevin Roberts, the president of the Heritage Foundation and a Catholic, gave a talk repudiating integralism.

Hazony, meanwhile, in a speech cueing up Missouri Senator Josh Hawley, leaned heavily on Christian themes. “If America’s going to change,” he told the attendees, “It’s going to change because you decide that Christianity is going to be restored as the public culture of the United States… you don’t need to be the majority. There are plenty of places in this country where a Christian majority, a pro-Christian alliance to support Christian values, can still be mustered.”

For some, however, this embrace of religious nationalism marked a worrying return to the pre-Trump status quo. The GOP, after all, has courted the Christian vote for a long time; one of the original indictments of the ”dead consensus” was the ease with which the old party paid lip service to Christian “family values” while allowing the country’s social fabric to decay. The question hanging over the conference was: is DeSantis really a new and improved Trump, someone who can push forward with a viable alternative to Bush-Romney conservatism? Or is he an instrument of restoration — a movement conservative who recognises that everything must change for everything to stay the same?

The most explicit note of caution in this regard came from billionaire tech mogul Peter Thiel. Speaking on the first night of the conference, Thiel warned the assembled NatCons not to fall into “nihilistic negation” of the liberalism represented by states such as California. “The temptation on our side is always going be to just say we’re not California… We don’t like tech, we don’t like California, we don’t like the woke stuff”.

“All of that’s true,” he continued, “but it’s not a way we get back to broad-based growth that’s not just some kind of real-estate racket. We have all these different states where we’re trying different things, and I think DeSantis is probably the best in terms of offering a real alternative to California. But if we’re going to have a high-growth alternative, the test is, do the real estate prices come down? And the fact that real estate in Florida has melted up over the last two or three years is not evidence that you’re succeeding in building a better model than California. I worry that’s evidence you’re becoming like California.”

If DeSantis heard what Thiel had to say, he didn’t give any indication. A few hours later, the brash and confident governor railed against the “biomedical security state”, the “woke mind virus”, the depredations of “Brandon”, the states that kept their schools closed. He proclaimed, in the title of his talk, that “Florida is a model for America.” He closed with that classic staple of Republican rhetoric: a salute to the troops buried in Arlington National Cemetery.

For now, DeSantis remains a cipher — he is all things to all elite factions of the party, even as much of the base remains loyal to Trump. Both the establishment and the populists can read into him a vessel for their vision of the country, and thus far, DeSantis has had to commit to neither. But as a former GOP staffer told me after the conference, remarking on the conference’s embrace of both DeSantis and religious rhetoric, “I fear the NatCons are becoming cheap dates and have fantasies of being more.”

What he meant was, for a politician like DeSantis, the NatCons will be easy to please. Whether he will be compelled to listen to them is a different question.