There are inflatable dinosaurs leafletting shoppers in Aberdeen city centre. Grassroots feminists in Forth Valley are organising a conference for International Women’s Day. “Weegie Witches” dance out their defiance in Glasgow, while “Sole Sisters” create street art out of shoes to show the SNP that “women are voting with their feet”.

Local groups of gender critical feminists have sprung up throughout Scotland, from the Borders to the Highlands and Islands, and are making their mark both online and on the streets. Stickers, posters, postcards and suffragette ribbons all bear the same message for Nicola Sturgeon’s government: “Women Won’t Wheesht.”

As Covid restrictions ease and May’s local elections draw close, these women are ramping up their campaign to make the Scottish government think twice about its plans to reform the Gender Recognition Act (GRA). Currently, if you want to legally change your gender in Scotland, medical evidence is required; you must have lived in your “acquired gender” for at least two years. The Scottish government’s proposed reforms would mean that no diagnosis or medical reports would be needed, and the period in which applicants must have lived in their acquired gender would be cut to three months.

In other words, self-identification of gender would be introduced. The SNP government is expected to reveal its draft legislation in the coming weeks. For Scotland’s gender-critical feminists, their fight has never been so urgent.

Many of these women describe themselves as “politically homeless”. Some are considering breaking the habit of a lifetime and not voting in May; others will spoil their ballots. Some are considering whether to vote for the new Alba party, which has pledged to protect and preserve the rights of women and girls. The Scottish Conservatives have also realised this is an issue on which they can appeal to female voters — several Conservative MSPs visited a demonstration outside the Scottish Parliament organised by For Women Scotland in September.

For my research published this week into what I term a Scottish “cooperative constellation” of gender-critical feminists, I spoke to a coalition of women that reaches across the independence/unionist divide and includes women from all sections of society and political tribes. Some began their feminist careers on Greenham Common. For younger members, this is their first step into the political public sphere. The inconvenient truth about transwomen

Putting aside what divides them, these women are united by concerns about the impact of the GRA reforms on women’s sex-based rights: the implications for women’s sport, refuges, prisons, and the myriad services achieved by feminist campaigners since the Seventies.

I carried out 18 in-depth interviews with politicians, researchers, journalists, bloggers, creative artists and grassroots campaigners — all of whom were promised anonymity. I asked all of them to disclose any abuse they had suffered due to their involvement in the constellation. After all, women’s livelihoods have been threatened because of their opinions on the GRA reform, and many involved in the debate are concerned for their personal safety.

What they had to say made for grim listening: they spoke to me of death and rape threats, demands that their employer sack them and attempts at “cancellation”. One interviewee described the response to an essay she posted online, in which she expressed her opinion that being a lesbian is the same as being same-sex attracted. “Almost minutes after it was published, I got a message saying, ‘I hope you get raped, or, better yet, killed. LOL’.” She also had another abuser post pictures of her home and her home address: “And this account was filled with things like, ‘Kill TERFs, TERFs don’t deserve rights. TERFs aren’t women’.” As another interviewee put it: “We seem to have become like the new witches, it’s like the new Salem”.

Of course, during lockdown the activities of this constellation of feminists were confined to social media. Women shared, debated and organised on Twitter, Facebook and sites like Mumsnet, where feminist forums offer a comparatively safe space for gender-critical discussion. Women could keep their anonymity but signal their stance by using the suffragette colours of purple, green and white. In recent months, David Lammy’s dismissal of gender critical women as “dinosaurs hoarding rights” has offered another eye-catching addition to Twitter handles and Mumsnet usernames: the T-Rex emoji.

The term “cooperative constellation” comes from the literature surrounding a phenomenon of feminist cooperation that took place in the EU and Nordic countries in the Nineties and early Noughties. In order to achieve women’s rights, female politicians, researchers, activists, and policy advisors worked together across political divisions. The researchers provided the theory, while the activists and grassroots led demand for change, which policymakers and politicians could then use in their push for new legislation.

The cooperative constellation also, importantly, included — and continues to include — female members of the media. The women I interviewed for my project acknowledged how crucial it is to achieve mainstream press coverage of their concerns. In recent years, though, the growth of online commentary has meant that gender-critical voices are less reliant on  the mainstream media. The contemporary constellation in Scotland has expanded to include bloggers and writers with large online followings — including, of course, J.K. Rowling.

But that is not the only difference between today’s Scottish activists and those who came before. Unlike the cooperative feminists 20 years ago, these Scottish women are focused on slowing down policy change, asking policymakers to think more carefully about how proposed changes will impact the sex-based rights of women and girls. And, in comparison to other constellations — where the networks were often supported by national governments that desired an academic underpinning for their sex-equality ambitions — the Scottish feminists are acting as outsiders. Those members of the SNP, Scottish Greens and Scottish Labour — including Holyrood and Westminster politicians — who belong to the constellation are acting in direct contradiction of official party policy.

Although they come from all corners, the majority of the women I interviewed are largely positioned on the centre or Left of Scottish politics. They are women who have been used to supporting, and being supported by, institutions like the BBC, The Guardian and trade unions. Yet when they appealed to these organisations to discuss their concerns about GRA reform, not only did they find their worries dismissed, but they were also vilified and accused of transphobia. One interviewee who had raised her concerns on an email list for union activists was immediately expelled from the group. The heading of the email, sent to all members, was “Fucking transphobes, fuck off”. 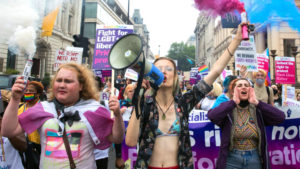 And as well as being rejected by their usual allies, the constellation has also been thoroughly snubbed by established women’s organisations in Scotland. Interviewees stated that they felt betrayed by organisations such as Engender or Rape Crisis, which do not represent their views. In fact, established women’s organisations were perceived to be in a feedback loop with the Scottish government, and to represent only a small section of Scottish women, with no interest in alternative points of view. It was frequently suggested that this was a necessary position, given their reliance on the government for funding. And so gender-critical feminists had felt compelled to start their own grassroots organisations, including For Women Scotland or Frontline Feminists Scotland.

As a result, they have found themselves vilified and abused. But they have organised, and are fighting back. For many there is a new sense of sisterhood and solidarity with women throughout the country. “It’s united people from all kinds of backgrounds and experience,” one interviewee told me. “That’s been one of the most rewarding things.”

With lockdown lifting, they are back out on the streets with their leaflets, ribbons, slates and dinosaurs. “It’s almost like a guerrilla network, getting out there instead of just sitting around talking”. Forget devolution — Nicola Sturgeon is about to discover there’s a new dividing line in Scottish politics.