Growing up in pre-devolution Scotland, I found that deference towards authority was in short supply. The loathing directed at those in power was visceral, the tone caustic and funny. I knew that pursed-lipped, finger-wagging Calvinists were supposed to exist, but such people were hard to come by in the wild.

One of my earliest political memories is of the minister in my grandparents’ church starting the service with a prayer for striking miners. A few years later, at the Glasgow Comic Art Convention, I remember Alan Grant, the Scottish co-writer of Judge Dredd and Batman, exhorting the audience not to pay the poll tax. This was also the era in which a fictional, unemployed, ranting Glaswegian with a bandage wrapped around his head became a beloved national symbol.

Indeed, in the 80s and 90s, a freewheeling attitude of utter contempt for the high and mighty seemed as Scottish as a Tunnock’s Tea Cake. Yet on my first visit home from Texas since pandemic chaos destabilised the world, I detected a very different mood in the air.

This was the first time I had been in Scotland since the government at Holyrood had passed a law making it illegal to utter wicked words in the home, the enforcement of which will necessarily involve family members denouncing the sinners among them to the authorities. I had missed Nicola Sturgeon’s daily briefings on TV, although I was aware that when the BBC had proposed to broadcast them less often, and perhaps not in full, there had been “widespread criticism”, while a petition to keep them on air had attracted over 50,000 signatures.

Meanwhile, I found myself receiving regular moral instruction from the government in the form of signs admonishing me against uttering wicked words on the train, letting my dog shit in the street, or conversely, letting my dog hunt hares; minimal unit pricing for alcohol had also been in place for three years. That finger wagging from the pulpit energy was back: it was as if the Scottish government feared that an irredeemably sinful people might at any moment erupt in spasms of hatred aimed at both humans and speedy animals with long ears.

What happened to the Scotland I remember? It was as if, by voting the nationalists into power, my fellow countrymen had accidentally resurrected Calvinism in woke form. The national poet wouldn’t have liked this much, I thought — and not simply because, were Robert Burns to return today, he would be cancelled in seconds both for his womanising, and his efforts to get a job as a bookkeeper on a slave plantation in Jamaica. The SNP have already won the culture war

A deep disdain for authoritarian piety runs through Burns’ poetry, informed not only by his rebellious temperament but also his direct experience of being denounced from the pulpit by the moral guardians of his day. Most famously, in Holy Willie’s Prayer he satirised a self-satisfied Calvinist believer who thanks God for making him one of the elect and justifies his lustful nature as a “fleshly thorn” intended by God to prevent him from becoming too perfect. Simultaneously he prays in a most unforgiving fashion for the destruction of his enemies for the same sins. Thanks to Burns, Holy Willie became archetypal, and I have often thought about his 21st century equivalents while walking around Edinburgh. For Burns, however, it was personal: the man he mocked was no abstraction but a certain William Fisher, an elder in Burns’ own parish, and the poem was so libellous that he circulated it in private.

But it wasn’t just preachy, vindictive hypocrites that earned Burns’ mockery. In To a Louse he describes in loving detail the journey of a louse to the top of a lady’s bonnet in full view of everyone but her. Extracted from the poem, the famous lines “O wad some Pow’r the giftie gie us/To see oursels as others see us!” sound like a prayer for wisdom and humility, but read in the context of the preceding verses it is hard to escape Burns’s glee at puncturing his neighbour’s self-satisfaction. Indeed, Burns sought to undermine just about everything that Calvinist worthies presented to him as sombre and sacred; in Tam O’Shanter, a drunkard’s horse outruns a horde of spirits, while in his Address To the Deil, Burns suggests that even “Auld Hornie” himself might have a shot at redemption if he would only change his ways.

Would the religious authorities of Burns’s day have accused him of “stirring up hatred” had such a vaguely worded law existed at the time? It seems likely. And would Burns, so aware of the lines he crossed in his own verse that he circulated some of it secretly, have felt at ease in a country where friends and family are encouraged to inform on each other for things said in their own homes? It seems unlikely. 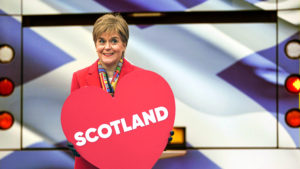 What the SNP really believes

Yet many Scots do appear to be comfortable in such an environment, and place great trust in the authorities to always do the right thing, to adjudicate with wisdom over what can and cannot be said in private as well as in public. The more I thought about it, the more my experience growing up in Scotland in the 80s and 90s seemed anomalous. Perhaps the virulently anti-authority strain in the national character was especially pronounced back then not because of some innate aspect of the Scottish soul but rather because the country was ruled by an indifferent Conservative government in London that had very little support north of the border.

Between Thatcher’s election in 1979 and her resignation in 1990, she managed to alienate large swathes of Scottish voters, and the number of Conservative MPs in Scotland dropped from 22 to 10. When Alan Grant took to the podium to inveigh against the Poll Tax in front of a bunch of youthful comic fans, it had already been in place for a year longer than in England. Mrs. Thatcher had decided to experiment with it first in the test lab of Scotland, where she wasn’t too bothered about alienating voters.

It’s not that all Scottish people were contemptuous of all authority; but many of them were contemptuous of that authority. After all, it’s easy to be anti-establishment when you have nothing to gain from the establishment. Once the SNP came to power, that changed. There was a different power in the land, and many people identified with it, agreed with it, and benefited from it. Meanwhile the Brexit vote and the omnishambles of Boris Johnson’s leadership has made it easy for the SNP to direct that caustic, skeptical, questioning attitude southwards. The importance of being British

It was easy, too, for Burns to hate the establishment. When he wrote those poems mocking the powerful and attacking hypocrites, he — a poor farmer and notorious fornicator — was completely alienated from the powers that stood over him. But what if he had lived in today’s Scotland, where a poet of his stature would not need to think about moving to Jamaica to earn money, but might instead be offered a cushy professorship at a state-funded university, prestigious seats on cultural committees and access to funding from Creative Scotland?

I doubt that even then he’d bite his tongue. Following the success of his first collection, Poems, Chiefly in the Scottish Dialect, Burns moved to Edinburgh where he was feted by the literary elites of his day. In this environment his jabs at preachers and rural overlords were about as edgy as attacking Trump in the pages of The Guardian, and he began to focus on collecting and reworking traditional ballads instead of insulting  the church elders who annoyed him.

But he still enjoyed provoking the sacred cows of his new audience, too. His poem, A Dream, which Burns wrote in response to a particularly unctuous encomium to George III not only disparaged the king but included the suggestion that Bonnie Prince Charlie might have done a better job. To the enlightened Edinburgh readership of Burns’s day this was much more ‘problematic’ than whatever derision he aimed at rural ministers: support for the vanquished Stuarts was not only politically unacceptable but regarded as an uncultivated, lower class belief. Burns in fact had written it before moving to the big city, but he kept on publishing it in every edition of Poems, even when it would have been in his interests to leave it out.

As the literary scholar Carol McGuirk observes, Burns was a man “stimulated by prohibitions”. He would find plenty to stimulate him in Scotland today. The love poet, the man of the people, the composer of odes to haggis — I like that poet. But the Burns I find most inspiring is the annoying guy, the rebel who doesn’t trust overbearing Calvinist types, and who doesn’t pander to self-satisfied elites, even when it’s in his best interest to do so. It is those qualities that make him a poet not only of his time, or more generally of ‘all times’, but specifically for our times.