The West, following the lead of the United States, has reacted to Russia’s invasion of Ukraine by introducing a “crippling” regime of sanctions. It is a “total economic and financial war” aimed at “caus[ing] the collapse of the Russian economy”, the French finance minister Bruno Le Maire candidly admitted. And yet many of the current sanctions appear to be run-of-the-mill restrictions used against several countries in the past. A number of them — including export bans and the freezing of certain assets — have been imposed on Russia since its annexation of Crimea in 2014. Even the much-discussed exclusion of a number of Russian banks from the main international banking message system, SWIFT, is not new, having already been used against Iran, with mixed results.

The most controversial aspect of the new sanctions regime is without a doubt the freezing of Russia’s offshore gold and foreign-exchange reserves — about half of its overall reserves — but even this is not unprecedented: last year, the US froze foreign reserves held by Afghanistan’s central bank in order to prevent the Taliban from accessing its funds; the US has also previously frozen the foreign-exchange reserves of Iran, Syria, and Venezuela.

So, taken individually, these measures are not as exceptional as they’ve been portrayed. However, never before have so many sanctions been deployed at once: there are already 6,000 various Western sanctions imposed on Russia, which is more than those in existence against Iran, Syria and North Korea put together. Even more importantly, none of the previous targets of sanctions were remotely as powerful as Russia — a member of the G20, and the world’s largest nuclear power.

Likewise, none of the 63 central banks that are members of the Bank for International Settlements (BIS) in Basel — known as the central bank of central banks — has ever been the target of financial sanctions. The BIS itself has even joined in on the sanctions in order to prevent Russia’s access to its offshore reserves. This really is unprecedented: since its establishment in 1931, the BIS had never taken such a measure, not even during World War II.

So what should we expect from the sanctions? Western pundits and commentators have little doubt: the sanctions will hamstring the Russian economy, sow discontent among the Russian people and elites alike, and possibly even cause the downfall of the Putin regime. At the very least, we’re told, they will hinder Russia’s war efforts. But history suggests otherwise: see Iraq, or more recently Iran. Far more likely is that this turns out to be the latest Western strategic miscalculation in a long list of strategic blunders, of which the United States’ inglorious withdrawal from Afghanistan is just the most recent example.

After all, Russia has been preparing for this moment for quite some time. Following the first wave of Western sanctions, in 2014, and partly in retaliation against them, Putin embarked on what analysts have dubbed a “Fortress Russia” strategy, building up the country’s international reserves and diversifying them away from US dollars and British pounds, reducing its foreign exposure, boosting its economic cooperation with China, and pursuing import substitution strategies in several industries, including food, medicine and technology, in an effort to insulate Russia as much as possible from external shocks. True, Putin made the mistake of leaving around half of those reserves parked in foreign central banks, resulting in these now being confiscated. But nonetheless Russia still has access to more than $300 billion in gold and foreign-exchange reserves — more than most countries in the world and more than enough to cushion any short-term fall in exports, or prop up the rouble (for a while).

Moreover, the Russian central bank reacted to the sanctions by stopping capital flows out of Russia and nationalising the foreign exchange earnings of major exporters, requiring Russian firms to convert 80% of their dollar and euro earnings into roubles. It also raised interest rates to 20% in an effort to attract foreign capital. These measures are aimed at bolstering the rouble’s value and providing a flow of foreign exchange into the country. They appear to be working: while the rouble is around 40% of its value since the start of the conflict, the Russian currency’s free-fall seems to have come to a halt for now, even registering an uptick over the past two weeks. For the time being, Russia’s financial account — the difference between the money flowing in and out of the country — is far from disastrous.

Let’s not forget that the main source of Russia’s foreign-exchange reserves — oil and gas exports — has been excluded from the sanctions, for obvious reasons: for most European countries, Russia accounts for a huge part of their oil and gas imports (and other staple commodities), and there’s simply no way of replacing those energy sources from one day to the next.

In short, Russia runs no risk, in the short term, of running out of reserves and not being able to pay for its imports. But even assuming that the West decided to put a stop to all its imports from Russia overnight, there’s no reason to believe that this would bring the Russian military machine to a halt. The notion that “we are financing Russia’s war by purchasing gas and oil”, as the Finnish prime minister recently stated, is fundamentally misplaced.

As the economist Dirk Ehnts has observed, the Russian military machine, for the most part, doesn’t rely on imports (if anything, Russia is an arms exporter). It is sourced domestically and, like the salaries of its soldiers, is paid for in roubles, which the Russian central bank can create in an unlimited quantity, just as the Bank of England does when it comes to pounds.

Equally unfounded are rumours of an impending Russian default. In recent years, the Russian government has taken steps to reduce its foreign liabilities: its foreign currency-denominated debt amounts today to about $40 billion — a tiny amount compared with the size of Russia’s yearly exports of more than $200 billion in oil and gas. Any decision to default would be entirely political. We mustn’t forget that the very creditors expecting to be paid back in dollars are the same that have just confiscated a good part of Russia’s dollars — if the latter were to default on their payments, it would be an even bigger problem for their Western creditors. As with Russia’s oil exports, hurting Russia inevitably means hurting ourselves as well.

Moreover, thanks to the Russian government’s successful efforts at boosting domestic agricultural production, domestic food production now accounts for more than 80% of retail sales, up from 60% in 2014. This means Russia is largely self-sufficient food-wise. So even if its export revenues were to plummet (which is unlikely), the country wouldn’t go hungry — unlike the rest of the world — and would most likely be able to continue to finance its war efforts. 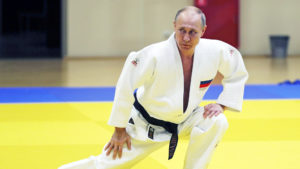 Might a selective ban on exports of specific high-tech Western components, some of which are bound to be used in Russia’s defence industry, prove more effective? Possibly. But Russia has been reducing the dependence of its military-industrial apparatus on foreign components and technologies for years. More importantly, both hypotheses — that Russia’s economy and military can be brought to their knees through export and/or import bans — rest on the flawed assumption that the whole world is on board with the sanctions. But that is far from the case.

While most of the world’s nations — 143 out of 193 — voted for a resolution in the UN’s General Assembly condemning Russia, the 35 countries that abstained include China, India, Pakistan and South Africa, as well as several African and Latin American states. These and many more countries — including several that voted in favour of the resolution, such as Brazil — have strongly criticised the sanctions against Russia and can be expected to continue trading with Putin. It’s frankly very hard to call Russia isolated when some of the world’s largest economies have refused to support the West’s sanctions regime.

China, in particular, has been very vocal in its support of Russia. Beijing is already the Kremlin’s main trading partner, and it alone can absorb huge quantities of Russian energy and commodities, as well as provide Russia with basically any industrial and consumer goods that the latter currently imports from the West. China also operates an alternative to the Western-managed SWIFT system called CIPS to manage cross-border transactions in yuan, which could allow Russia to partially circumvent the West’s financial blockade. Even though the yuan still makes up a small percentage of international transactions, its role is bound to grow rapidly in the coming years (consider the news that Saudi Arabia may start pricing its oil sales to China in the latter’s currency). All this helps explain why even Western financial analysts, such as Goldman Sachs and JP Morgan, predict a year-on-year contraction for the Russian economy of about 7% — bad, but hardly catastrophic (Covid caused a much larger drop in GDP for most countries).

However, much will depend on the policy response of the Russian government. Obviously, the withdrawal of many foreign firms and decline in foreign investments will increase unemployment. But the Russian government can cushion the blow by resorting to a “Keynesian” expansionary fiscal policy aimed at boosting domestic investment and supporting incomes. If ever there were a time for Russia to abandon its historically ultra-tight fiscal policy, as several Russian economists have been arguing for some time, it is now. Two weeks ago, I suggested that, in the short term at least, the US will benefit from the conflict in Ukraine. In the long term, however, it is slowly becoming clear that US-led global Western order will suffer. The West’s imposition of sanctions — involving not only governments, but also private companies and even allegedly apolitical organisations such as central banks — has sent a clear message to the countries of the world: the West will stop at nothing to punish countries that step out of line. If this can happen to Russia, a major power, it can happen to anyone. “We will [never again] be under the slightest illusion that the West could be a reliable partner,” the Russian foreign minister Sergey Lavrov has said. “We will do everything so as never, in any way, to be dependent on the West in those areas of our life which have a decisive significance for our people.”

Those words are bound to reverberate across the world, with dramatic implications for the West. As Wolfgang Münchau has warned: “For a central bank to freeze the accounts of another central bank is a really big deal… As a direct result of these decisions, we have turned the dollar and the euro, and everything that is denominated in those currencies, into de facto risky assets”. At the very least, it will inevitably push countries to diversify their reserves and increase their yuan holdings, in order to loosen the West’s grip on their economies and bolster their economic resilience and self-sufficiency. Even if it doesn’t push countries straight into Beijing’s arms, as is already happening with Russia, it will likely lead to the emergence of two increasingly insulated blocs: a US-dominated Western bloc and a China-dominated East-Eurasian one.

In this new pseudo-Cold War, “non-aligned” countries could find that they are in a better position to assert their sovereignty than they were under the American global empire. Forget “the collapse of the Russian economy” — this could be the result of the West’s new economic war.