It is all in Genesis IV.

“Now Abel kept flocks and Cain worked the soil. In the course of time Cain brought some of the fruits of soil as an offering to the Lord. And Abel also brought an offering – fat portions from some of the firstborn of his flock. The Lord looked with favour on Abel and his offering but on Cain and his offering he did not look with favour. So Cain was very angry and his face was downcast”.

As we know, Cain was so consumed with anger and jealousy that he attacked his brother in the fields and killed him. He was put under a curse to be a “restless wanderer” on the Earth.

On the surface this is a story of sibling rivalry, something tormenting Prince Harry. As reports at the weekend suggest, the rift between the young prince and his elder brother seems to be widening as publication day for the pointedly titled “Spare” draws nearer. It’s hard not to feel some sympathy for Harry. It can’t be easy being the spare, the younger brother whose role in the royal “firm” started in a position of subordination and has become steadily more subordinate as more direct heirs arrive to dilute his lineage.

There are plenty of younger siblings who have suffered in this way although none of us can imagine the particular hardship of being the “spare” to a throne.

Cain and Abel, though, is about much more than sibling rivalry. It contains deeper truths about human nature and the “deadly” sin of jealousy. It sounds something of a warning, therefore, for the spare prince.

Life, and in particular free market society, produces a constant churn of perceived “winners” and “losers”. Society and the media measure people by criteria of material wealth, fame and power. Hollow as these perceived “virtues” may be, they skew our perceptions, driving behaviour and sentiment.

It is natural for the winners and losers to be attracted to systems of belief which support their self-interest. Thus the winners from capitalism tend to support capitalism and the losers tend to seek out ideologies that would challenge or replace it. Those who resist this temptation are the honourable exception — capitalists who see the flaws in free markets, show real compassion and are willing to give their money away; or those vulnerable and poor who bear no resentment or anger.

Unfortunately the exceptions are far too rare.

Ideas of resentment and jealousy echo through time, and played a prominent part in the 19th century, when philosophers sought to create new theories of morality without God. Nietzsche borrowed a French word, ressentiment, to anchor the origins of his moral philosophy. By his estimation, Western moral thinking had its roots in the master-slave relationship.

The weak and marginalised members of society (such as persecuted Christians) resented those who oppressed them (the masters) and inverted the prevailing morality, turning humility, equality and compassion into the highest virtues.

“While the noble man lives in trust and openness with himself … the man of ressentiment is neither upright nor naive nor honest and straightforward with himself. His soul squints; his spirit loves hiding places, secret paths and back doors, everything covert entices him as his world, his security, his refreshment.”

The dominant creed of the resentful for most of the 20th century was Socialism. As George Orwell pointed out, socialists don’t generally love the poor, they hate the rich.

When Marxist materialism became discredited with the realisation of the economic failures of the Soviet Union and the rising death counts of Communists and Socialist regimes around the world, the bearers of “ressentiment” turned to other domains into which to inject their venom. Key targets were the spheres of culture, family life, sex and race.

And so was born critical theory, the bastard child of Post-Modernism and Frankfurt School post-Marxism. To this conception we owe the hierarchy of victimhood, the one to which we must now all defer; it also spawned the language of the social justice warriors — words such as “my truth”, “lived experience”, “white privilege” (or any other kind of privilege for that matter) “ intersectionality” and so on.

The virus of critical theory was smuggled into the American culture via academia (two members of the Frankfurt School — Marcuse and Adorno — actually emigrated from Germany to US universities before the war). 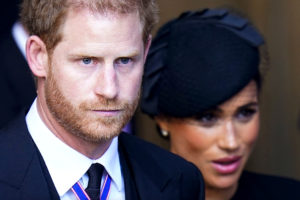 From academia, critical theory (popularly understood as wokery) has infected the media, publishing, Newsrooms, Hollywood, football commentators, public administration, HR departments, and even Big Tech. Perhaps the last place you would expect it to appear is the British Royal family. Surely they are not the losers in life’s lottery?

But that is to misunderstand the nature of resentment. Even within the Royal Family there are those who consider themselves losers. Cain was only upset about his status relative to Abel. It did not matter that he was Adam’s first born son.

Harry has no doubt been deeply frustrated by his status within the family and the nature of his “spare”ness. There is resentment and there is jealousy. Of course the Woke creed appeals. And no wonder Harry adopts its language. Which leaves us, ironically, with a hereditary Prince lecturing us about “privilege”.

There are of course other dimensions to Harry’s story. There is the shadow of his mother and the influence of his wife. But to the extent that he is a victim, he is the victim not only of his family circumstances but also of poisonous philosophers. Perhaps his example can be a cautionary tale to the rest of us.

Sir Paul Marshall is chairman of Marshall Wace. He writes in a personal capacity.