It has become common for countries to boast three-word slogans. India, Incredible India. Malaysia, Truly Asia. Afghanistan’s could be: We Squander Opportunities. Or perhaps: We Never Learn.

Consider Afghanistan’s recent history. The Soviet Union occupied the country, was defeated and forced to withdraw in 1989. The resistance groups formed a coalition government, but instead of reconstruction, they turned on each other in a civil war that flattened Kabul and plunged the country into chaos. That chaos allowed the Taliban — in its first iteration — to take power.

Relieved that the fighting was finally over, the population initially welcomed a group whose name translated as “the scholars”. But instead of bringing scholarly calm and smart economic recovery, the Taliban focused on inventing eccentric rules of dress and conduct, closing girls’ schools, blowing up the Bamiyan Buddhas, and partnering with an Arab terrorist group, al-Qaeda — leading to 9/11, US retaliation and the downfall of the Taliban regime.

Then followed 20 years of massive financial infusions, development and education programmes, and an enormous US military effort to train and equip the Afghan military. Such levels of investment and effort could have turned Afghanistan into Central Asia’s Switzerland or Dubai. Instead, the country’s politicians perfected the arts of theft and corruption. The Army let the Americans do the heavy-lifting while they focused on creating ghost soldiers (imaginary recruits whose pay cheques the officers could collect). The new government, uninterested in nation-building, engaged in villa-building, creating fantastically tasteless Hollywood mansions, while the majority of their fellow citizens languished in rural mud huts. These rural areas were perfect terrain and recruitment for the Taliban, who not only persisted but grew. Eventually, the US faced the facts and, last year, pulled out, bringing about the Taliban’s second iteration.

The Taliban, in the conversations that accompanied last year’s Doha Peace Talks, vigorously emphasised that they had learned from their past mistakes. This time, they were going to be benevolent guardians of the state, and show the West and the world what an Afghan Islamic republic could accomplish. They would focus on development and on the welfare of the population.

At first, things went relatively smoothly. The Taliban entered Kabul without incident; they could not be blamed for taking unilateral control of the capital, Ashraf Ghani had fled in the night in a cash-stuffed helicopter, instead of fulfilling the agreement to meet and form a shared transitional government. Life continued much as before, with some improvements. NGOs, for instance, reported that they could now visit and serve previously inaccessible areas. It wasn’t great that the Taliban cabinet didn’t include even one woman, and that members of other ethnic and political groups were not represented — but, given that the alternative was a return to civil war or outright war, the world was willing to be patient.

This was, after all, a fighting force that had yet to acquire skills of governance and administration. Even as the re-opening of girls’ middle and high schools kept being postponed on one pretext or another, even after a prominent al-Qaeda leader was found comfortably ensconced in the middle of Kabul (and less comfortably removed by drone), the world’s patience held. No one wanted a renewal of conflict, especially since, in the absence of any credible contender, it would just mean a grinding bloody and protracted fight. There were even plans to set up a special UN commission to negotiate a “normalisation” of diplomatic relations with the Taliban, potentially culminating in the recognition of their government. What an opportunity! The former pariahs were poised to take a place on the world stage, and all they had to do was let girls go to high school, include a few non-Taliban in their various councils, and stick to the things they had already agreed to in Doha, such as not supporting terrorism.

It seemed all too easy — until it wasn’t. Just before Christmas, it was announced that women were now also banned from universities. And hardly had the world had time to condemn it before the next insanity followed: women were now banned from working for NGOs, domestic or foreign. 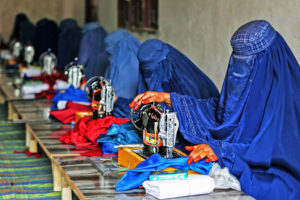 Both moves are, obviously, unacceptable on grounds of innate values and human rights. They have no foundation anywhere except in the pathology of the nutcases who came up with them; certainly not in Islam, as the chorus of dismay from scholars and leaders across the Islamic world immediately expressed. But they are also inexplicable on grounds of simple pragmatism. Without external aid, Afghanistan is in very deep trouble. It lacks, for a period of some years at least, the resources to feed itself or to provide power, basic tools for transport or farming, or pharmaceuticals and medical care. To be self-sustaining, the country needs to wisely and energetically build up infrastructure and human capital. And just consider basic demographics. Given the total segregation in place, which does not permit women to be treated by male doctors, how do the Taliban propose to cultivate a viable next generation? Without female nurses and doctors, the already high maternal and infant mortality rates will only increase.

Many within the higher and middle echelons of the Taliban acknowledge all of this. Privately, they express dismay over the rulings in hardline Kandahar province, which they claim represent a very small yet very prominent minority around Haibatullah, the Taliban’s Supreme Leader who was born there. And this time, unlike during the Taliban’s first iteration, there is public pushback. There have been demonstrations by women, and also by men. A group of male students in Herat walked out of university final exams in a show of solidarity with their banned female colleagues. According to credible reports, some Taliban foot soldiers have left their posts in protest. Some of this opposition reflects principles, some reflects pragmatism, and probably much of it is a mix. The Taliban hardliners are going to run the country into the ground, which is clear to most, including officials and even cabinet members of the Taliban.

So, what is the Taliban actually doing about the hijacking of the movement’s historic second chance? Not much and certainly not enough. There are internal discussions during Taliban meetings. Delegations have travelled to Kandahar to appeal to the Inner Circle, but have been rebuffed on the grounds of magical thinking. The country will starve without external aid? No — food comes from God, who will provide if everyone demonstrates sufficient piety. Women and infants die during childbirth without proper medical care? It is God’s will.

It’s not hard to see what this quality of leadership will bring about: renewed civil war. Already, gatherings of opposition groups are taking place in Vienna and Dushanbe, among other locales, hosted by Western and regional governments who are contemplating backing an uprising. This may be tempting, but it’s not a good scenario. There is no contender strong enough for a clear or speedy victory, and a return to violence is the last thing one would wish on the Afghan people. To avoid either the collapse of the country’s economy and its return to the role of pariah state, or a return to war and bloodshed, the Taliban must disempower the small clique of eccentric autocrats in Kandahar. The Taliban’s chaotic war on women

This, of course, will not be easy. While Islamic orthodoxy may agree that the rulings on women’s work and education are un- and even anti-Islamic, harming the community of Believers, Islam has no equivalent to excommunication and Sunni Islam in particular tends to emphasise obedience to the ruler, even if he is flawed. Further, during the decades of their struggle, the Taliban needed to remain unified and indivisible. To show division and disagreement publicly is a big step.

On the other hand, if the reasonable Taliban elements find some courage, they will find conditions to be favourable. Highly respected Islamic authorities inside the country, such as the renowned Professor Abdul Samad Qazizadah, or Maulawi Jalilullah Mawlawizadeh, the head of a madrassa in Herat, have publicly denounced the rulings as having no basis in Islam and as having the potential to destroy the country and ruin the good name of Islam before a world audience. Their words carry weight. And while it is short of excommunication, last week’s declaration by the Organisation of Islamic Cooperation — which represents 57 member states — disavowing the Taliban rulings on female education and employment should give dissidents within the group the theological and political backing to openly oppose these policies. It would qualify them for significant intra-Islamic aid and support if they managed to take the rudder.

Outside Afghanistan, the international community had been cautiously inclined towards accepting the Taliban government. That’s out of the question now, as long as the Kandahar Krazies are in charge. But if they were to be removed, and the moderate wing prevailed, they could expect significant help and support. This last part isn’t a heavy lift. If they were then to rescind the female employment ban, open girls’ schools, readmit women to the universities, and take steps to a more inclusive government, it would change everything. Add to that, if the Kandahar Hardliners — several of whom are on global terrorism lists — were no longer part of the government, sanctions could be lifted and the country’s frozen assets released.

Many of these moderate Taliban members took on the United States and Nato. Will they have the guts to take on the small circle of hardliners who are upending the peace dividend and leading the country into ruin? With civil war on the horizon, they may not have much choice.