Recently, the Prime Minister found himself on Tyneside but thought he was on Teesside. So what’s the problem, other than straightforward stupidity? The problem is that the British road to power rarely leads north, and at a time of much talk on whether the Government’s “levelling-up” strategy can work, it might be worth reflecting for a moment on a period when the north levelled-up for itself.

Take Tyneside in the early 20th century for example. You could write a history of the North East as a tale of integrated industrial elites, families tied together by business and in some cases marriage. Armstrong dredged the Tyne into a world-class river. Stephenson (father and son) built the world’s first railway nation. Joseph Swan invented the electric lightbulb. C A Parsons built the first steam turbine vessel. Charles Merz built the first interconnected electricity supply. John Wigham Richardson (his uncle) persuaded fellow shipbuilders to use it.

When Yevgeni Zamyatin went to oversee the building of Russian ice-breakers on Tyneside in 1916, he saw shipyards so advanced he based his dystopian novel We on them. In 1906, Wigham Richardson and Swan Hunter launched the four-funnelled RMS Mauretania, the largest, the fastest, and the most beautiful coal-powered steam-turbine ship in the world. And just in case you think strong trade unions and great companies don’t go together, Sidney and Beatrice Webb viewed the North East as one of the best union organised regions in the country, and Tyneside shipyard platers the best paid.

Indeed, as late as the Sixties, Parsons’s steam turbines employed 6,000 skilled draughtsmen and engineers, while A C Reyrolle’s electrical switchgear employed 12,000. Lads wanted to work there because the apprenticeships were famous and the sports facilities unrivalled.

Peter Chapman’s Tyneside Heritage (2021) is exactly the kind of work we need to understand how ‘levelling up’ happened on the ground. Not only is it the first history of South Shields for a very long time, it is also the narrative of the Chapman family and their rise from early 19th century shipwrights, to mid-century drapers, to late-century chartered accountants and significant civic leaders.

At the heart of the story stands Lt Col Sir Robert Chapman (1880-1963), who joined his father’s firm and who, with his wife Lady Helene, became Tory celebrities in a rock-solid Labour town. How could this be? The Chapmans could have lived anywhere they chose (nice Northumbrian rectory perhaps, or dappled Durham farm house) but they chose to live in Westoe village, a mile from the highest death-rate borough in the land, a place caught in the teeth of the Great Depression. That’s the dignified part of their tale. The efficient part concerns Chapman’s role in developing commercial enterprises, as you’d expect perhaps from a chartered accountant with fingers in a lot of pies, but also in social housing, clean water, Harton Hospital, the Shields Gazette, the Boys’ High School, and almost every aspect of public life, from member of parliament for nearby Houghton-le-Spring to lord mayor of South Shields, from magistrates’ bench to colonel in the Northumbrian 74th Regiment (with a full chest of family medals, including a VC).

When in 1938 Chapman fell out with the Labour council over re-armament (they were against, in spite of new shipbuilding orders), he resigned and he and Lady Helene marched off to don their masks as the town’s first Air Raid Wardens. Whether ladling soup in downtown Zion Hall, or hosting charity fetes up at Undercliff, their baronial sub-suburban pile, or leading the floor at fundraisers, when we talk about levelling-up, we need to bear in mind those who didn’t leave it to others.

If Sir Robert was a local hero, Sir Arthur Munro Sutherland (1867-1953) was a industrial titan when the North East was the most heavily industrialised region in the world. He owned shipping lines, coal mines and shipyards. He ran an extensive Baltic trade in coke and timber.

Like many other great northern industrialists, Sutherland believed in an ancient Northumbrian homeland that had preceded England, that had brought Christianity and Industrialisation, that had special qualities of skill and character. Marx thought the time would come when advanced societies would have no need for homeland or religion. He was wrong. Not only did Sutherland have a penchant for old Northumbrian castles (he bought one), and New Northumbrian myths (he was one), he was also a committed Methodist.

His wife’s family, the Hood Haggies of Willington were the biggest makers of steel hawsers in the world. They were also active Methodists. Newcastle department store pioneers the Bainbridges and the Fenwicks were Methodists too, along with the great ship-owning Shields Runcimans, close family friends of the Chapmans.

A picture emerges, then, of an integrated business elite knowing each other and working together in the markets and in the chapels, in the suburbs and civil society, and in the two great hubs of Newcastle business, the Commercial Exchange down on the Quayside, and the Union Club up by Central Station. Sutherland’s head office was in walking distance of both. Of course, networking can mean cronyism too, and Sutherland was up in court for it in 1943. But it can also take you out of yourself. Chapman enjoyed his middle-class coteries it is true, but he also served with distinction in a war where men like him saw not only how the other half lived, but how it died as well. Long before “levelling-up”, therefore, the northern regions were able to foment indigenous growth where self-belief and belonging were part of an economics of agglomeration.

Why so? First, after the war, Bavarian small to medium-sized firms surged while North East England remained dominated by three heavy industries, one of which (the National Coal Board) actively campaigned against the introduction of new industries. By the Eighties, public sector employment in the region stood at 63%, and the age of the entrepreneurial elite was all but over. 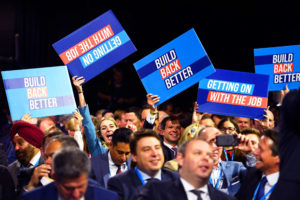 Today Bavaria has a cluster of technical universities, colleges and linked apprenticeships, and manages to retain its graduates. The North East hasn’t, and doesn’t. In small to medium high-tech businesses there is much talk of “brain capital” and “spin out”. That the top British spinners are Oxford and Cambridge comes as no surprise because the economics of cultural agglomeration doesn’t just happen in the business hubs. It happens, it especially happens, in ancient colleges as well.

The North East may lack some or all these Bavarian features, but one thing it has in abundance is positivity. In spite of years of decline, and declinism (a North East trope), the people remain upbeat, friendly, and drawn to their own regional myths. Love of the craic is one of the first things visitors notice and although everybody talks about it, nobody sees it as an economic quality.

Positivity is a form of entrepreneurial activity. How people feel about who they are and where they live can be transformative. This is easy to see in the hospitality industry, say, or in teaching, or sales and marketing, but how it relates to more technical fields, or R&D, or business start-ups, is harder to explain even though all these activities demand positive relationships whether in matters of trust, or problem solving, or training, or site location. Not everything is down to money.

All market activity is as much social as economic, and all contracts, as Durkheim reminded us in a brilliant insight, depend on non-contractual obligations. In what he called the “Protestant Ethic” Max Weber recognised what he called the “Spirit of Capitalism” and “Ethic”, in this sense, meant a power within. And ‘power within’ is what is missing from the government’s levelling-up strategy.

Their white paper is a remarkable document nevertheless, promising to “unleash” and “empower” “every part of England that wants it” with generous and sustained funding settlements, six kinds of “capital”, five kinds of policy (“pillars”), 12 kinds of target (“missions”), hundreds of promises, application forms and god knows how many acronyms holding untold pots of money. The basic idea is that although the South won’t get less, the North will get more. Orwell would have loved this, but the real question is does Michael Gove mean it?

For sure, his white paper is a huge statement of belief in the regions, but unfortunately not in the people. It invokes the Industrial Revolution, but there’s not much business history. It calls for new forms of capital, but there’s little on accumulation. It talks about culture, but only as galleries and museums up from London, not inside the north’s own traditions and certainly not as something you might find on the street. If motorway service stations are anything to go by, business has not exactly shown us the way. Go to Costa at Woolley Edge, for example, and look for Yorkshire. Indeed, look for anywhere. We have come a long way from the days when Parsons’s steam turbines stood for the north. My question is how does a regional business elite grow and to what end? I realise that another way of describing the Chapmans and the Sutherlands is in terms of a capitalist class. In the past, I have made my own modest contribution to this way of looking. This essay, however, is about something different. Given that not everything can, or should, come from the state, levelling-up has no other choice than to think in terms of regional pride and purpose.

The North East continues to make things — Nissan cars, for instance — and some very good companies are locally owned. Barbours of South Shields for instance is listed in the region’s top 50. Founded in 1894 to make hard-wearing clothes for seafarers then motorcyclists, Barbour showed its drive and adaptability by re-inventing itself for the third time as a world-leading fashion brand.

If you want to see how Geordie pride and purpose matters in manufacturing go and see the woman who leads it and the 600 women who work there. Michael Gove is a clever man and his civil servants mean well, but if they are serious about levelling-up, they need to start with the people, stupid, before all else.