War has always been the father of innovation: a reset for societies forced to adopt whatever methods work just in order to survive. The outburst of voluntarism that has gripped Ukraine is a striking example: mutual aid groups, local volunteer organisations and local defence militias have cropped up, taking on many of the burdens of the overstretched state. We can almost term this a form of “war anarchism”, analogous to the “war socialism” that overtook industrial capitalism during the World Wars, paving the way for postwar social democracy. The relationship of the people to an often distant and dysfunctional state is being reset; new paths have perhaps opened up for postwar Ukrainian society, politically and socially more inclusive than the outward form of liberal democracy that came before, in which political power was in reality the plaything of rival oligarchs. The war against the invading Russians has many qualities of a revolution.

Bars and restaurants are donating food to refugees and raising money for the army. Cryptocurrency enthusiasts are fundraising for the commercial drones and night vision equipment the troops at the front desperately need. Ukrainian civil society is at the heart of this war, with evidence of the self-sacrifice and creativity of the nation’s embattled people visible at every turn. Pavement billboards display photos of troops grateful for their new night vision goggles above the bank details funds should be directed to; volunteer militias request donations for new vehicles on Telegram; one Ukrainian veteran I met a few years ago has sold his thriving café in a Kyiv hipster district to buy a new drone for his unit.

Andriy Lyubka is a critically-acclaimed young novelist from the sleepy western city of Uzhhorod. I met him 800 miles to the east of his Transcarpathian hometown in the now-frontline Donbas city of Sloviansk. He was dropping off new SUVs, food and generators to fighters from Uzhhorod’s Territorial Defence Forces, the volunteer militia now holding vital positions as dug-in infantry.

In perfect English, he spoke with the smooth, slightly bored fluency of someone used to being interviewed by foreigners, at least in better times. “Now I cannot do my regular work because I cannot concentrate, focus on the work, you know,” he told me, as sirens wailed unceasingly in the background. “It is impossible for me to write or translate. And that is why I decided that I will dedicate myself to this very regular physical work.”

His first fundraising appeal on his Facebook page raised twice as much money as he expected, enabling him to buy two SUVs for Uzhhorod’s poorly-equipped TDF forces in the Donbas. Now he makes regular trips, handing over off-road vehicles sourced in Western Europe to his hometown volunteers fighting at the other end of this vast country. A critic of prewar Ukrainian society — his widely-praised novel Carbide, recently translated into English, is a fable about smuggling Ukraine’s entire population into Western Europe through a hidden tunnel — Lyubka sees the war as having brought a divided nation closer together. 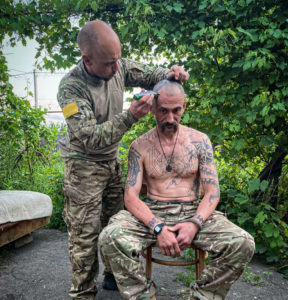 “It’s maybe the first time I’ve visited Donbas,” he told me. “But now, we have these mutual steps towards one another, because a lot of people from Donbas are living now in our cities in Western Ukraine, and our friends are fighting here at the eastern edge of the front. And of course, it is a very fast method to create one united Ukrainian nation and it works very well. It is one of the main achievements of this war of Putin’s. It is of course opposite to what he planned.”

For the volunteer Territorials from Uzhhorod, fighting far from home in Sloviansk, the war is a difficult duty they cannot shirk. Sociology Professor Fedir Sandor, a 46-year-old father of four, left his job at Uzhhorod University to fight in Donbas. A photograph of him coaching his students through their end of term exams from his frontline trench recently went viral on Ukrainian social media. Meeting him in Sloviansk — he would not take me to his position, because of the constant casualties his fellow soldiers were taking from Russian shelling — Sandor outlined the difficult circumstances he was living in.

“So this is a totally new experience for me, because I’ve never served in the Army, never took part in any military activities and now I’m learning — I used to teach students and now I’m being taught!” A bald, burly man with a thick, fair beard, there is little trace of the Sociology professor of four months ago in the assault-vested combat veteran standing before me. “Today was cluster bombs, sometimes it’s chemical weapons,” he told me. “Yesterday the house where soldiers live was hit and three were wounded. That’s why the main weapon of a soldier is a spade!” he laughed.

The heavy casualty rate among TDF fighters is alarming, and social media videos of volunteers refusing to fight because of lack of weapons, or of wives and mothers protesting against their men being sent to the distant Donbas, are regularly shared by pro-Russian social media accounts. I asked Sandor if he felt well-prepared, as a completely untrained volunteer, when the war broke out. “We were training to use machine guns and firing weapons but it’s a totally different situation we’re learning here,” he replied. “It’s a war not of machine guns but of artillery and IT technologies. But I don’t want my wife to be threatened with rape as it was in Bucha. It’s better for us to stop it here.” As young TDF fighters got to grips with their newly-donated SUV — I could hear the sound of, unexpectedly, Fischerspooner’s “Emerge” blasting out of the windows while they twiddled with the controls — I chatted to Andriy, huddling against the unseasonably cold wind. “I think that now, in three weeks, this is our eleventh car,” he said with satisfaction.

Andriy’s sense of accomplishment was visible. Before the war, many ordinary Ukrainians were profoundly dissatisfied with how the country was run: millions had moved to Western Europe, and to Russia, in search of better alternatives. The Maidan revolution had kept the country out of Russia’s orbit — at great cost — but not enough else had changed. But now, Andriy is using his profile as an ascendant writer to provide the equipment that may preserve the lives of his fellow Uzhhorod volunteers fighting at the front. He is doing his bit for the nation in its time of greatest trial and, as with many Ukrainians, doing so gives him a greater personal stake in the new Ukraine being forged by war.

“It is very deep changes that are now taking place in the consciousness of people,” he told me. “So, I think that maybe we even needed something like this earthquake as a big war, you know, because now we are ready to build a new, good country, and the only things we need now are victory, and peace.”