“I want to influence the world with China’s intellectual property.” This is the great ambition of Tang Jia San Shao, 41, who wants to build the “Disney World of China” — a gigantic theme park inspired by his stories. But Tang Jia San Shao is not in the movie business. He’s one of China’s wealthiest online authors, who was last reported to earn $18 million a year.

China’s vast lucrative web novel industry, the largest in the world, brilliantly illustrates the peculiar nature of “Chinese socialism” in recent years. The combination of unfettered economic growth with often severe restrictions on free speech has transformed online authors from writers into aspiring tycoons. The result is a consumerist vacuum, where authors hoping to follow in Tang Jia San Shao’s footsteps churn out vast quantities of work with little literary value or originality.

Tang Jia San Shao is known for both for his epic xianxia (immortal hero) fantasies in which lowly “cultivators” rise up the ranks to unmatchable omnipotence, as well as his dogged work ethic: he holds the Guinness World Record for 86 months of daily serialised chapter updates on Qidian, a webnovel platform backed by Tencent, one of China’s most influential tech giants.

He may be one of the rare success stories, but he has inspired millions of xieshou (writing hands) to churn out thousands of words a day in the hope of selling their own IP. As a rule, titles with the highest number of readers within a pay-per-view system, including Ashes of Love and The Untamed and Duolou Continent, are turned into lucrative TV dramas, computer games or manga series.

Tech companies such as China Literature and Qidian have morphed into shameless “IP cultivation” empires, overseeing a somewhat psychotic, dog-eat-dog world in which popularity is the only metric that matters. “Help readers fantasise about what they lack,” instructs the testosterone-heavy platform Qidian in its writing guide. With an estimated 450 million active readers, and as many as 25 million titles to choose from, competition is merciless and exhausting. If a title doesn’t get enough eyeballs, the platform cancels the book. Writers’ grasping tactics are mirrored in the personalities of their status-obsessed and borderline sociopathic protagonists. Heroes are known for their “shamelessness” and for intentionally humiliating (“face-slapping”) their opponents. Many will stop at nothing to acquire wealth and status, smiting anyone who obstructs their path to becoming the richest tycoon in the world or the most supreme being in the universe. In short, online fiction is often a fantasy in which brute individualism pays off, written and read by self-described diaosi — “penis hairs” or “losers” — for whom reality is a communal struggle.

Last year, all this suddenly ground to a halt when beleaguered and exhausted writers downed tools following a regime change at Tencent. By temporarily making content free to read and taking over the copyright of all works until 50 years after the death of the authors, Tencent planned to both strip writers of their revenue and deny them any hope of precious IP.

The dispute was eventually resolved, but it lit an old ideological fire amongst writers who are both victims, and advocates, of this mercenary genre of fiction. “This is class struggle,” said one writer. “The bourgeoisie and capitalists only pursue profits, their pores ooze dirty blood, they squeeze the proletariat for every drop of oil they can.” And they are not wrong.

This is a time of yawning differences between rich and poor in China, with the old Communist guarantee of lifetime employment — “the iron rice bowl” — a distant memory. The CCP has failed to protect gig economy workers from exploitation by big Chinese corporations. An obvious example is the country’s 300 million “floating” migrant workers, once foregrounded by the socialist revolution, who work gruelling hours and are denied basic rights in Chinese cities.

People have been trying — and failing — to remind the CCP that it is supposed to be a Left-wing party for some time. This may explain Xi Jinping’s current “Common Prosperity” drive promising to close a gaping wealth divide in Chinese society — and re-assert the primacy and socialist credentials of the Party. Actors, representative of a burgeoning idol culture and the new uber-class of celebrity, have become a soft target: they are conspicuously rich and have legions of adoring fans. 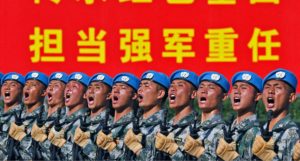 Thirty-year-old Deng Lun, swooning star of hit TV show Ashes of Love, is just the latest celebrity to be put in the stocks in China for tax evasion, resulting in a grovelling public apology, a $16.6 million fine and the suspension of all his online social media accounts. He seems to have got off lightly: Alibaba’s Jack Ma, tennis star Peng Shuai and actress Vicki Zhao all briefly disappeared. The CCP doesn’t take kindly to any individuals, except the great leaders of course, having that kind of kudos. Popularity or influence can be as dangerous as dissidence.

Yet Xi’s crackdown extends well beyond celebrities. Chinese writers are also being reined in, with the CCP insisting that all art needs to “take patriotism as its muse” and “serve the people and socialism”. Unsurprisingly, given the popularity of online fiction and its TV spin-offs, the government has imposed “socialist ratings” upon online writing platforms, and a “rectification” process if the score is too low. Tang Jia San Shao’s latest novel about a cultural relic restorer is apparently intended to support an application for Beijing’s World Heritage Status.

Writers are now encouraged to write fantastical tales about “red heroes” to support the CCP’s re-booted socialist agenda. “Heroic figures that save the world and humanity, as created in the work of many internet writers, are in essence or spiritually the same as the heroes in red stories,” says the deputy general of the Shanghai Writers Association, Xue Shu.

What’s more, online writers and readers are incentivised to personally censor any inappropriate content they come across: suicide, effeminate men, the past, politics, sex or, in fact, anything below the neck. A moral society is seen as integral to the legitimacy of the Party, following an ancient Confucian principle that the government should uphold good behaviour. This is one of the main reasons why Chinese literature has long been co-opted as a didactic, rather than artistic, medium.

So, what is left when cultural industrialists and authoritarian governments have had so much control over content? Both have contributed to the homogenisation of mainstream Chinese culture, gutting it of distinct, individual voices and replacing it with dull, lifeless tropes. And both big business and Big Brother keep asking young writers to effectively saw off the branches they are sitting on. One online writer, who goes by the name of Tiaowu, tried second guessing what would prevent his webnovel from being censored: he removed any details involving fights, religion, or lesbians. But chunks of his story kept disappearing. “You can cut off the leaves, you can cut off the branches, and the tree will live,” he wrote. “But they had me f**king cut off the entire f**king trunk.”

But there is still hope. A number of Chinese artists and writers follow neither the restless opportunism of the market, nor submit to the ever shifting and growing demands of the Party. These people, according to novelist Ge Fei, “go the other way”, often using publishers in Taiwan or, until recently, Hong Kong.

There are the surrealists born in the Fifties and Sixties — Yu Hua, Yan Lianke, Can Xue, Su Tong Mo Yan — who grapple with censored history and the absurdity of the present day in an innovative and bewitching mode known as May 35 (the imaginary date of the Tiananmen Square Massacre), in which they use metaphor, satire, surrealism, and fractured time frames to address difficult topics. Yan Lianke’s novel Dream of Ding Village is a haunting account of China’s hushed-up AIDs crisis in rural Henan, written as fiction to avoid censorship.

Meanwhile, lowly migrant workers sublimate their unacknowledged hardships on the production lines into beautiful verse in self-published magazines. Cheeky comic book writers foreground strangely subversive themes such as laziness and mediocrity as a way to poke fun at both online superheroes and the hard-working and tech-savvy youths that throng propaganda posters. And science fiction writers conjure up future societies that sit beyond the reach of political correctness and accountability.

It is unlikely these writers will ever build their own Disney World — let alone earn $18 million a year. But that’s not their aim. The diverse, not often read, landscape of Chinese fiction is full of free spirits, who stay under the radar to paint a truer portrait of Chinese society than economics and party politics reveal. According to an ancient Chinese proverb, which might be banned were it written now: “The twisted tree lives its life, while the straight tree ends up in planks.”