Filmmakers often end up as propagandists. Hollywood’s biggest directors went to the front lines, cinematically speaking, during the Second World War. Luminaries like Frank Capra, John Ford and John Huston made Why We Fight films to rally a war-weary nation. The series was so effective that Franklin Roosevelt thought they were “dangerous”. Movies were another way of making war.

Today, China has something different, and more sinister, in mind under President Xi Jinping. In speeches Xi and other party officials have repeatedly emphasised the need to “tell China’s story well.” That responsibility — until very recently — has been outsourced beyond the parties propaganda agencies.

The Communist nation sees film not as a weapon, but as the ultimate in soft power. A way to assure citizens and woo skeptics alike that China’s way of life is superior. Obey the state. Never think for yourself. Silence dissent. Is it any wonder it needs glamorous stars to spin those bleak messages?

But which stars? The answer for most of the 2010s was: Hollywood’s. The studios are only too happy to play along with China, assuming all those checks keep clearing. Erich Schwartzel’s Red Carpet: Hollywood, China and the Global Battle for Cultural Supremacy is a terrifying portrait of a slugfest for hearts and minds around the world. It’s one the West is losing. Badly.

Casual observers know how Hollywood genuflects to the Chinese film market. They chuckled over John Cena’s apology, in Mandarin, for suggesting Taiwan was a nation. Others noted that the upcoming Top Gun sequel removed a patch from Tom Cruise’s iconic jacket for the same reason. Those with longer memories will recall Paramount changing 2013’s World War Z to ensure China wasn’t the source of the zombie outbreak, like it was in Max Brooks’ novel of the same name.

These humiliations only hint at the geopolitics in play, and the long game enacted by China. Schwartzel fleshes out the bigger picture, revealing a nation keen on weaponising pop culture’s ability to impact thought on a global scale. It’s also the world’s biggest bully, using its fiscal might — and enormous market of movie watchers — to turn capitalism against itself. “Propaganda” doesn’t do justice to the thought control aimed at by Chinese policymakers.

How Biden can defeat China

They first opened their borders to U.S. films in the 1990s, without ever losing sight of the prime directive: Chinese supremacy. China’s cinematic market exploded in the 21st century, pulling U.S. film studios towards them in the process. Think of all the money you’ll make from our film-frantic citizens. Stateside flops became hits after opening in China — remember the World of Warcraft movie? It sank in every market other than China’s, where it banked nearly half a billion dollars for Universal Pictures.

How much extra coin did Disney earn by opening Avengers: Endgame in China? Try $629 million. Stars have sold their souls for far less.

Except not just any film is allowed into Chinese theatres. Gay themes are quickly excised, as is any excessive violence and nudity. Puritanical censors are one of the many hurdles American films have to jump before they are screened in China. Films defying authority or suggesting the CCP is incompetent are verboten. It’s a miracle anyone suggested a Red Dawn remake where China is the villain, as MGM did in 2008. So China became North Korea before the film was released in 2012 — one of many examples of China’s ability to warp storytelling that  criticises the party. 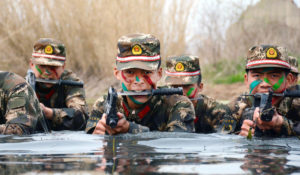 China is by no means the first country to put pressure on Hollywood. A fascinating chapter in Red Carpet looks back at 1930’s All Quiet on the Western Front. The German government cajoled Universal to restructure Front to make it less critical of their efforts in the war. Universal did as it was told in order to access German theatres.

Decades later, Hollywood is once again ceding to a foreign power’s requests, but on a far larger scale than in the past. No US studio could ignore the fact that, before the pandemic, at one point China was building around 25 movie screens every day. So they censored their products. And it wasn’t just the studios. A-listers will lecture the American public on any topic that comes to mind — recall Robert De Niro’s splenetic interventions during the Trump era — except China.

It adds up to a chilling indictment of Western capitalism. When uncoupled from moral scruples, it plugs smoothly into China’s mainframe.

Authoritarians are usually afraid of their own citizens. If their leadership was so good, and so effective, they wouldn’t need to fiddle with every film that enters the country. But it goes further than censorship. The saga of Chinese actress Fan Bingbing’s fall from grace is deeply unsettling. This rising star had it all … until she incorrectly reported her film income, and the story went viral. The government erased her face from movie posters and placed her under house arrest, going so far as to observe her around the clock — even in the bathroom.

Her appearance this year in The 355, a girl-power actioner with Jessica Chastain, Penelope Cruz and Diane Kruger, came via digital trickery. Bingbing wasn’t allowed to be on-set during the shooting due to her banishment, so she was summoned on screen via green screen technology. You either play by the party’s rules, or your career is vaporised.

This authoritarian approach to cinema — a blend of puritanical censorship and pro-state cheerleading — is spreading. “If you want to change a nation, change it through stories,” the head of Kenya’s Film Classification Board tells the author in another segment of Red Carpet. Since 2006, China has loaned Kenya the best part of $10 billion for infrastructure projects — but Chinese influence is now more than roads and bridges. It’s culture, too.

In moviemaking, as in diplomacy, China is increasingly striking out on its own. Hollywood’s slavishness is no longer as effective as it once was. Some US movies now don’t get a Chinese debut despite endless diplomacy and backpedaling. And China is accepting fewer Hollywood imports than it has for years. Last year it blocked all four of Disney’s Marvel movies from release in its theatres. American fare that does get past the censors is regularly rejected by Chinese audiences who a decade ago lapped it up. Blockbusters like Wonder Woman 1984 now generate a fraction of the cash they once did in China. (2017’s Wonder Woman generated $90 million compared to $25 million for its 2020 sequel.) The recent Matrix Resurrections belly-flopped in China with an $11 million haul to date.

Instead Chinese audiences are turning to more blatantly nationalistic movies. Take The Battle of Lake Changjin, made in co-operation with the CCP’s propaganda department, and the most expensive film ever made in China. It tells the bloody story of Chinese soldiers thwarting American forces during the Korean War, with a cast of China’s biggest stars.

Luo Changping, a journalist famous for his corruption investigations, critiqued the film’s historical accuracy on Weibo as it stormed the box office. He vanished after was detained by police in October last year. In the end, this patriotic gore fest made over $900 million, making it the second largest global release of 2021, behind Spider-Man: No Way Home. Never has party propaganda been so effective, and so frightening.

Such brash patriotism is no longer the American style. We are a long way from the days of Capra and Ford. Hollywood stars routinely apologise for perceived sins, past and present. The wrong joke, the wrong political statement or just sharing the wrong virtue signal can spark an apology tour. When can we expect some mea culpas for an entire industry doing China’s bidding, while ignoring the country’s authoritarianism, militarism, and human rights abuses? Don’t hold your breath.

Red Carpet ought to be parachuted into the mansions and villas of Beverly Hills. Stars ought to emulate the courage of Richard Gere, who abandoned his mainstream movie career to speak up for Tibet. “Hollywood, once America’s most persuasive evangelist, remains beholden to another country,” Schwartzel writes late in the book. Ironically, that country is less and less interested in Hollywood. Gone are the days when American imports dominated China’s box office charts.

It’s a disturbing picture for US studios. Did Hollywood sell its artistic soul for nothing?