This year’s French presidential election is no sweeping Austerlitz or close-fought Waterloo. With 60 days to go, the battle has degenerated into a series of brasserie brawls inside the dysfunctional political families of the Left, centre-Right and far-Right. And only one man is benefiting from the chaos.

As the weeks tick by, President Emmanuel Macron’s opinion poll score has scarcely moved. He has stayed within a narrow band of 23-26% of first round support for six months — eight to ten points ahead of the pursuing pack.

Below him there is an increasingly vicious scrap between three candidates of the far-Right and the right. When Éric Zemmour, the new poster-boy of ultra-nationalism, rises in the polls, Marine Le Pen, the old poster-girl, goes down. When Valérie Pécresse, the would-be saviour of the moderate, traditional Right, gains ground, Zemmour and Le Pen retreat. The Right-wing candidates expend much of their energy attacking one another. Macron remains untouched.

Below that, there is a six or seven-way scrap for the soul of the Left, whose only prize is likely to be a pointless fourth or fifth place in the first round of the election on 10 April. The Left, like the Right, spends much of its time savaging itself. Once again, Macron remains unscathed.

The campaign is frozen partly because of the Covid pandemic, whose towering Omicron wave seems finally to be abating. A recent IFOP poll found that only 52% of French voters have spoken of the election with friends, compared to 78% at this time in the 2017 campaign. The main topics of conversation in France are, according to the IFOP poll: Covid, Covid and Covid.

The campaign has been further (and deliberately) anaesthetised by President Macron. He has delayed (and delayed again) his formal entry to the race, instead preferring to campaign from within the relative safety of the presidential bubble, to the fury of the other candidates. Macron has made it clear that he will run, but intends to postpone a formal declaration for as long as possible. The deadline is 4 March.

This is especially a problem for Pécresse, who rightly sees herself as the only candidate who could beat Macron in the run-off on 24 April. She wants to make the campaign all about Pécresse vs Macron. For now, he is like a boxer dancing out of her reach. Is Emmanuel Macron a superman?

The Emperor Napoleon once said that he’d rather have a lucky general than a good one. Macron has not always been a lucky President but he seems to be a lucky candidate. His five-year term was troubled by the Gilets Jaunes rebellion in peripheral France in 2018-9. Almost half of his term has been dominated by the Covid pandemic.

And yet he had enormous electoral fortune in 2017, winning the presidency almost by default in his first ever political campaign. Luck is smiling on him again: just as the Covid pandemic began to fade as a reason to evade full-time campaigning, along came Vladimir Putin and 130,000 Russian soldiers on Ukraine’s eastern border.

Still, electoral considerations do not explain why Macron travelled to Moscow yesterday to try to defuse the Ukraine crisis. Macron believes that he can talk to Putin in a way that no other Western leader can. Yet Putin tells Macron (and Macron’s people tell the New York Times) that he finds conversations with Macron more “profound” than with other leaders. Putin spoke to the French president on the phone four times last week.

Will we shortly see Emmanuel Macron with a winged collar and a walrus moustache holding a piece of paper and proclaiming peace in our time? Some of the commentary on the French president’s visit to the Kremlin implies that Macron contemplates a Chamberlain-like betrayal.

This is misleading. For one thing, Macron does not have the power to commit Nato or the European Union to anything that other governments disapprove of. For another, Macron has consulted closely with Ukraine and his Western partners. Macron believes that he can agree with Putin the terms for a “time-out”, if not an immediate “way-out”. His approach has more in common with the views of the Ukrainian government than Washington or London’s.

Whatever the outcome, Macron can expect an electoral windfall. If he helps to broker a new détente between Putin and the West, he will be the hero of the hour. If he fails and Nato plunges into a serious confrontation with Moscow, Macron will be the nation’s independent-minded, internationally respected leader at a time of world crisis. Should the French election therefore be considered as done and dusted nine weeks before the first round? Some people are beginning to think so. Others say that the campaign hasn’t started yet; anything is still possible.

In the first of those camps, is The Economist’s data unit. They crunched the stats on recent polls last week and decided that Macron has a 79% chance of re-election. In the second camp, there is the latest in a series of unconventional polls by IFOP, which asks voters who they think will win. Only 21% of those questioned last week said that they believed in a Macron victory — a six-point drop in seven days. (Admittedly, the poll gave even lower scores to all the other candidates).

Why has the popular mood darkened? A spike in prices for food, housing, petrol, diesel and domestic gas has erased any sense of prosperity remaining from France’s economic recovery last year (7% growth, the highest in the G7). Additionally, Macron’s generally sound handling of the Covid pandemic has been muddied in recent weeks by a confusing series of rule changes on the testing of children in schools.

Conversations with senior figures in the Macron camp suggest that the President remains confident of victory. “Isn’t the The Economist’s 79% overpriced?” I asked one leading presidential ally. “Yes,” he replied. “I’d put his chances of winning at no more than 65%.”

Indeed, the President’s people believe that no other candidate has shown presidential stature; none has been able to raise themselves above the internal quarrels in their own camps. If Macron has been able profitably to delay his entry to the race, it is largely thanks to his opponents. “If there were another candidate, or two other candidates, polling at 20% or more of first round support, Macron would have been obliged to campaign more actively,” another Macron ally said. “As things stand, it’s him at 24-25% and all the rest a floor below or a couple of floors below. He has the luxury of staying out of the race for as long as he can.” The impotence of the French Left

The President’s strategy is to squeeze the first-round battle into as short a period as possible. He will refuse to take part in televised debates with up to 13 other candidates. He will fight a lightning campaign in which he will present himself as both a tested leader and an imaginative but cautious reformer — someone with a positive vision for France’s future but no longer the white-collar revolutionary of 2017.

To observers both in France and abroad, Macron’ electoral strength may seem odd. He attracts intense detestation, and his record is uneven. He has some legislative achievements, but his reform programme was truncated by two years of health crisis and lockdowns. His promise to make France a land of opportunity (while preserving much of the welfare state) is, at best, a work in progress. But while Macron may have failed to build a robust, centrist party, he has a strong personal following — what pollster Brice Teinturier calls a “fan-zone”.

Macron’s support still straddles, as it did in 2017, parts of both the old centre-Left and centre-Right. Its median point might be further Right than it was in 2017, but Macron still commands the allegiance of a large chunk of the old, pro-European “managerial” Left — people who once voted for Presidents François Mitterrand and François Hollande.

A BVA poll last October found that 54% of Socialist sympathisers were tempted to vote for Macron in the first round on 10 April. France’s generous Covid lockdown support programmes for businesses and individuals has convinced some moderate Left-wingers (by no means all) that the President is one of them. Macron has to expand that “fan-zone” of around a quarter of the electorate to 50% (and one vote) to win the two-candidate run-off on 24 April.

All depends on the identity of his opponent. If Marine Le Pen or Éric Zemmour reaches the second round, Macron can probably rely on reinforcements from part of the Left and from the pro-European, moderate centre-Right to keep the far-Right out of the Elysée Palace. If he is matched against Valérie Pécresse, his task becomes harder. The two-week second round campaign would be a close-run thing but not necessarily his Waterloo. 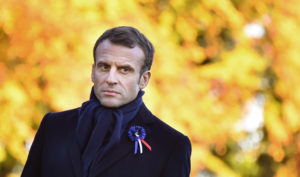 Macron’s people are confident that he would beat Pécresse. “Some of the Left will vote for her to defeat Macron but she doesn’t have the spark, that extra quality she will need to beat him,” one Macron ally said.

Perhaps. Perhaps not. If the cost-of-living crisis worsens, she may not need much of a spark. As Teinturier warns: “Purchasing power is the one factor that can most easily destroy support for an incumbent.” In short, it’s not all over. After all, French elections often throw up an unexpected plot twist.

There is, however, a strong chance that Macron will be the first President to be re-elected by the French in 20 years. He would also be the only President of the Fifth Republic to be re-elected without having first lost de facto power to the opposition in a parliamentary election.

If he is re-elected, Emmanuel Macron will become the most powerful, experienced leader in the European Union — with ambitions to make the EU stronger. Macron-haters outside France should start bracing themselves for that possibility: he may not be running yet, but the signs suggest he is well on the way to crossing the finish line in first place.