By the drowsy standards of the undead American literary world, criticism of Fuccboi, the debut novel of 30-year-old Sean Thor Conroe, has been strangely polarised. The Washington Post hailed it as “its generation’s coming-of-age novel”; Gawker’s review, “More Like Suckboi,” claims that Fuccboi “captures nothing of our present moment”.

The novel may be a release from a major press (Little, Brown), but its author isn’t famous; nor is his offering — a fragmented piece of autofiction about a 30-year-old named Sean Thor Conroe writing a book called Fuccboi — particularly mass-market. So why the histrionics? Well, Conroe received a six-figure advance for this first novel.

Yet while such a sum will always raise eyebrows, especially envious ones, Conroe has been subjected to levels of vitriol unusual even for the literary “community”. The dope on Conroe circulating among the disgruntled (no six-figure advance) is as follows: Conroe is nothing less than a privileged, wealthy, white-passing impostor, who, Barry Lyndon-style, has passed himself off as a dejected, pitiable, impoverished victim of white supremacy (he’s half Japanese) and capitalism (he’s a former delivery boy). That is to say, he is the kind of wretch who passes as a literary idol for the publishing world’s exacting commissars.

For a time, the indie winds were in Conroe’s favour, and praise was doled out. But since that cheque — some wager, because of it — the tides have turned. In a post entitled “Fuck, Boy!”, Sam Pink, a writer and painter of working-class extraction, put his allegations bluntly: “[I’ve had] my entire work stolen from me.” To whit, Pink accused Conroe of swiping his striking book’s telegraphic, slangy style — a blend of Soundcloud rap and leaden Instagram self-care argot. Pink is disgusted by this “offensively appropriated” “fake slang from an ivy league kid.”

Conroe, predictably, claims to be speaking in his real voice. In his acknowledgments, Conroe writes:

Ty ty ty to Giancarlo DiTrapano for not only letting me write how I talk, but encouraging me to.
That shit there.
Man.
I can’t even.

For what it’s worth, Conroe does talk like that. I briefly met him when he attended a reading at my apartment, though he seemed uncomfortable and often stepped outside to smoke in the cold. As I later learned, two other guests were the respective publisher and author of an essay accusing Conroe of, basically, slumming it. The battle, as always, is about stolen victimhood, and the writers, as always, respond by punching up their “trauma” and playing down their “privilege” to stake a claim to what is, after all, an unimpressive and even grating style. Authenticity aside, when Hanson O’Haver, in Gawker, dumps on Conroe’s use of “laundered rap slang” and Jonah Bromwich’s New York Times review includes a pro forma condemnation of the same as “cringeworthy”, one wonders: where have they been? Do they remember the Beatniks? Elvis? Norman Mailer’s “White Negro”? White and white-passing Americans appropriating African American slang is nothing new; what is new is skittishness to publish writing that does so. Surely, then, however unappealing you might find this hyper-contemporary style, his publisher deserves credit for taking on the political risk accompanying its use by a man not immediately identifiable as an oppressed racial minority (Conroe is, again, half Japanese).

Similarly, Fuccboi is lightly daring in its gestures toward political relevance: it’s easy to see why a publishing house would have thought this book relevant to today’s crisis of liberal masculinity. As our narrator puts it, “How tf was I privileged./I couldn’t do shit. Not only that, no one allowed me to show/admit I couldn’t.” He yearns to be “one of the good ones”; to seem “so woke and self-aware and self-deprecating about how dumb ideas of alpha-beta masculinity were”. Yet given the intense censoriousness of his “woke” circle, who accuse him of “getting lost in the men’s rights tunnel”, writing is his only “way to start tackling repression and shame” — to avoid becoming like a school shooter, or even Hitler.

Despite the title, he seems to be a pretty good guy (and pretty continent, too: only one act of fornication, in over 350 pages!). The worst things he does are listen to Joe Rogan, watch some “low-key red-pill videos”, very noncommittally question the reality of the gender pay gap, and equally casually say “bros over hoes”. The only slightly developed conservative thought is one regarding his relationship with his “ex bae”, where he reflects on her abortion: could anti-natalism perhaps be nihilistic? Could neoliberal feminism perhaps be careerist? Well, yeah. Ultimately, the “anti-woke” side of this book is so anodyne that one wonders whether Fuccboi, like the narrator’s pre-Fuccboi manuscript, may not have been a bit too edited-for-acceptability.

And yet I think this book is earnest. If anything, its issue is not a lack of authenticity, but a surfeit thereof. It will be obvious to the few who finish it that Fuccboi is the genuine stream of consciousness of the author, spilled with little self-censorship onto the page. All of this is presented with what one hopes is an at least slightly satirical sense of self-important militancy, as when the narrator explodes to a perfectly polite stranger: “I’m tryna write for people who don’t read. Who don’t give a shit about books.” 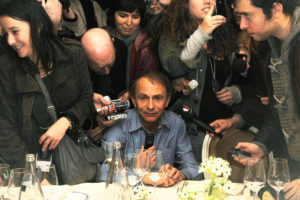 The problem, then, isn’t that Conroe’s parents were rich (which I have no cause to believe is the case), or that he didn’t, as Pink claims, “earn” his audience by publishing online before getting the big deal. The problem is that this book, like so many others in its milieu, values “authenticity” and “realness” over more venerable criteria of literary value (depth, characterisation, plot). Fuccboi does accurately represent the cretinous depravity of the Millennial generation, as well as the self-aggrandising cult of martyrdom — increasingly by self-diagnosed mental or physical illness — with which my generation shirks the responsibilities historically incumbent upon the civilised mind. But that does not make Fuccboi a work of art.

The current crop of young writers is less ambitious and less accomplished even than the minimalists and dirty realists — Bret Easton Ellis, Raymond Carver, Denis Johnson, Amy Hempel — they are (likely unknowingly) imitating. In that earlier generation’s writing, the chaotic hedonism of the everyday attains emotional depth and significance; characters are complex and differentiated, and struggling to form complex and differentiated relationships with each other. They have more than names, characteristics, and the occasional impulse; they have feelings, thoughts, and sometimes, even, ideas.

But where there once was narrative that made life seem complicated, moving, and significant, indie literature today primarily comprises trite, essentially ecological descriptions of an already familiar scene, devoid of any coherence or meaning. Men write “stories” about men with their demographic characteristics doing cocaine/Adderall and displaying traits of narcissistic personality disorder; women write “stories” about women with their demographic characteristics doing ketamine/Klonopin and displaying traits of borderline personality disorder.

Both contingents write in a mode of blasé detachment that has become achingly stale. They are averse to or incapable of subjectivity and depth. What little allowance is made for human feeling is exclusively of pharmaceutical origin. These are not works of art; they are simply unremarkable descriptions of unremarkable lives.

In the glib generational determinism so popular today, one excuses this shallowness of character and failure to depict any interpersonal conflict as a “real” and “relatable” mirror of the “autism” of the young generation (indeed, this self-serving self-ID is so common that forums for the autistic and their caretakers use the acronym AA for “actually autistic”). However, these writers, and the thinly disguised stand-ins that populate their autofiction, are not autistic. They are merely permanent adolescents, incapable of empathising with any experience outside of their own and comfortably withdrawn into a profound egotism.

Similarly, one excuses their unambitious and unintelligible style by reference to the influence of “online” life on young minds. However, the more accurate explanation for this monotonous sea of uninspired cliché is that these writers do not read anyone except their friends, nor do they aspire to much readership beyond them. And that’s probably for the best: readers deserve better than for 20-somethings functionally addicted to psychotropics to describe their existence in turgid, unorganised prose. The generalised inability to execute the most basic fundamentals of modern narrative is not a product of an autistic or digital zeitgeist; it is a product of lazy and illiterate writers.

Does Fuccboi fall under this umbrella? For all its flaws, Conroe resists the suicidal renunciation of many of his peers. Perhaps this, in part, is why his coevals have so passionately denounced his novel as cringe: Conroe unapologetically does care about literature, in his own guileless and heartwarming way. Perhaps it sounds silly for him to talk about “That Art Life”; perhaps it feels awkward and uninformative to read his emails with Sheila Heti. But at least, unlike so many today, he believes that writing could serve a function beyond identity work or courtship, and at least expresses interest in authors outside of his immediate coterie.

In that sense, he is the exception. Of course, this nihilism is reflective of the current mood of the world. But its consequences are more severe: if our authors are as distracted and superficial as anybody else, and our literature as unnourishing as TikToks or memes or tweets, why on earth would anyone read? Much like the humanities’ wan retreat to the “digital humanities”, this attempt to stay relevant — I’m not a normal book, I’m a cool book! — will only doom the medium to total obsolescence.