Ever since they rode out of the Book of Revelation circa 90AD, the Four Horsemen of the Apocalypse have wreaked existential havoc. They may now finally be about to achieve the End Times. We are either going to starve to death, as the world population reaches 10 billion by 2050, or drown or scorch to death due to climate change soon thereafter.

The Devil has finally found the ultimate weapon of mass destruction. It is not, as you might suspect, a hurtling asteroid or Putin pushing the thermo-nuclear button; it is, apparently, farming. It is, according to the environmentalist and journalist George Monbiot, “the most destructive force ever to have been unleashed by humans”. This ancient activity takes up vast tracts of the planet and the gases emitted by its cows and sheep take up its atmosphere.

Credit where it is due, Monbiot presents in his latest book Regenesis:“Feeding the World Without Devouring the Planet” a damning case for farming being the Devil’s work. What the public understands as farming — carefully husbanded crops and moo moos attended to by a rosy-faced family — is increasingly absent from the landscape and confined to the board books the middle classes read to their toddlers. About 70% of global farmland is owned by 1% of “farmers”. Agri-business now rules the roost.

Four companies — Cargill, Archer Daniel Midland, Bunge and Louis Dreyfus — control 90% of the global grain trade. Similarly, four companies — ChemChina, Corteva, Bayer and BASF — control 66% of the world’s agricultural chemicals. These businesses are hardly renowned for their care of the environment. Likewise, politicians. The post-Second World War intensification of agriculture, promoted in the West by national governments and the nascent EU as a path to food security, has starved the soil and exhausted crops.

The litany of the woes caused by agriculture continues. Pesticide use on farmland has resulted in what Monbiot calls “Insectageddon”: even an eco-minded country such as Denmark has witnessed a drop of 70-80% of insects in the last 20 years. No fewer than 75% of antibiotics sold in Europe are used for treating farm animals, and perhaps 58% of those antibiotics are excreted, with some reaching water courses. I learned to swim in the River Wye, in the self-same stretch near Hay where Monbiot today fears to tread water, due to pollutant run-off from 590 chicken units. Soya fed to housed cattle requires the cutting down of the Amazon rainforest. Then there is wasted water from the tap left running. And those methane belches.

We in the West live in a careless and consumerist Sodom and Gomorroh, and the remainder of the planet is following in a handcart. By what is known as “Bennett’s Law”, consumption of fat and protein (read: “meat”) rises with income. As hitherto starving parts of the globe gain more currency in the pocket so they will, like us decadent Westerners, tuck into burgers, spare-ribs, entrecote, all of which come from the same pesky, methane-producing, land-hogging livestock who are already the principal cause agents of The End Times. “The biggest population crisis is not the growth in human numbers, but the growth in livestock numbers”, Monbiot declares.

It might come as a surprise to Saint George of The Guardian, but many of us in agriculture would concur with his jeremiad against Big Farmer. Indeed, my book The Running Hare, an account of sustainably retro-farming an arable field, anticipates many of his sallies against the agri-industrial dragon. Conventional, chemically-dependent agriculture is a bonfire of the sanities, ecological and economic, being dependent on big (but barely scrutinised) public subsidy.

Monbiot’s solution is a ‘‘farmfree” future, in which our farmland has been re-wilded with exotic megafauna — think lions, elephants, giraffes. What will we eat? Bacterial soup, grown in vats. Such gloop can, apparently, be modelled into tasty dishes. In an aural irony a comedian would blush to construct, Monbiot’s damascene conversion to this ascetic diet came in Helsinki.

But any discussion of global food policy needs to begin with one plain fact: there is, as Monbiot concedes, no actual food shortage. Already, the planet’s farmers produce enough food to cater for the projected 10 billion humans of 2050. The problem is waste, and distribution. The West goes to fat, while Ethiopia hungers; worldwide, more than 10% of people are hungry, roughly 25% are overweight or obese. The United Nations’ figures for global food waste are somewhat fluid, but 33% is in the ballpark. The rich West throws away food, while the Third World lacks the storage to keep food preserved. I’d be more amenable to laments about farming by every George, Dick and Henrietta if the public stopped binning food, and government did its job of equitable distribution. Octopus farms are the future

Not that my views as a farmer will interest Monbiot. He has seen the light, and I am to be made extinct. Or I will be turned into a tourist guide for his wildlife park — which, after all, is what the British countryside will become under “farmfree”. Lions are apex predators, and quite capable of eating a human for lunch, so they will need to be fenced in when the Serengeti comes to Surrey. What used to be working countryside becomes an extended zoo where Nature is exterior to humans. A visitor attraction for city folk.

To justify his “farmfree” future Monbiot, after reasonably critiquing conventional, intensive agriculture, then traduces alternative, nature-friendly, climate-aiding farming methods. No-till, regenerative, and organic are all set up as Aunt Sallies, to be “demolished” in the proof that no farming model is sustainable. Not one.

But take organic farming (and I declare an interest). According to Monbiot, organic farming only allows “a slightly wider range of wildlife to persist” than conventional farming, and can inflict more damage on the overall environment because of its “lower yields”: it uses more land to produce the same amount of food. But as the same George Monbiot noted, in 2000, in a Guardian article called “Organic farming will feed the world“, organic farming of maize produces yields “identical to yields of maize grown with fertilisers and pesticides, while soil quality in the organic fields dramatically improves”. He goes on to explain the research of Professor Jules Pretty of Essex University, which demonstrated “how farmers in India, Kenya, Brazil, Guatemala and Honduras have doubled or tripled their yields by switching to organic or semi-organic techniques”. And does organic land really possess only a “slightly wider range of wildlife”? According to an Oxford University study, organic farms support 34% more plant, insect and animal species than conventional farms. I’d say 34% was more than “slight”, wouldn’t you?

As the high priest of British veganism, Monbiot really has it in the neck for farm animals, who do not feature in his eerily Orwellian “farmfree” dystopia. Curious, is it not, how some eco activists claim to love animals, but are happy to see farm breeds — some of which, like White Park cattle, have been around since Druid times — made extinct? Is there some sort of hierarchy, where wild animals are good, farm animals bad? I aver that our Ouessant sheep, a Viking-era breed from Brittany, are no less fascinating than their wild Mouflon ancestors. And I have observed both.

Sheep — usually Monbiot’s bete noire, for their supposed “sheepwrecking” of the uplands of Wales — get off lightly in Regenesis, in which the pasture-fed, organic cow becomes the “most damaging farm product” on Earth. Why? Because they are slow to grow to maturity, thus taking up more space, and emitting more methane.

But the organic cow will produce, from its back end, enough manure to feed over 2 million insects a year, the start of a wild food chain going all the way up to the fox and swallow. More organic cows might, then, end “Insectageddon”. Moreover, traditional hay meadows — the precise origin and purpose of which is the feeding of livestock like Ermintrude — are one of the most florally diverse habitats in the world, and can contain over 140 plant species. 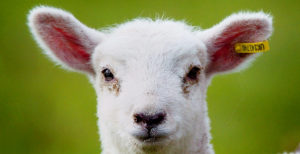 Why we shouldn’t eat lamb

Arguments like this will fall on stony ground with Monbiot and his largely urban following of rewilders, whose experience of agriculture is that of the voyeur, the observer. Monbiot has no appreciation of farmland ecology, and for him Nature and Farming are absolutely discrete (as they are, ironically, for Big Farmer). He complains that 40% of global land use is given over to farming, whereas “Only 15 per cent of the world’s land, by contrast, is protected for nature.”

Is not a traditional, chemical-free hay meadow, with its meadow brown butterflies and meadow pipits, “protected for nature”? For The Running Hare, I took a chemically-lashed arable field and turned it into a Victorian-type cornfield, which as well as giving “yield” ran anew with poppies and hares, cornflowers and red-leg partridge.

The British countryside has been farmed for 3,000 years, and in those millennia developed distinct farmland habitats, with allied, dependent species. The clue is in the names of the flowers: Cornflower, Meadowsweet, Corn Marigold. Today, in Britain, it is these flora and fauna of traditional farmland that is most under threat. Since the industrialisation of agriculture in the Fifties, some 97% of traditional hay meadows have disappeared, and arable flowers, grown in fields since the Stone Age, have become extinct. As for the farmland birds, here’s the report of theDepartment of the Environment, Food and Rural Affairs, Wild Bird Populations in the UK, 1970 to 2014:

In Britain’s fields, courtesy of Big Farmer, specialist birds, bugs and flowers totter on the edge of extinction. They are wild, but they live in a human-created habitat, farmland. Some arable flowers actually require the disturbance of ploughing to live. For the sin of impurity, farmland’s wild things are of no account to Monbiot. There is no place for them in his farmfree future. He therefore threatens to finish the work begun by Big Farmer.