The 21st century was supposed to belong to Africa: it heralded the start of the “Africa Rising” era, when the continent seemed destined to enjoy an extended period of economic growth and rising incomes. Two decades later, however, that narrative no longer holds. Last month, 22 low-income nations on the continent were suffering from debt distress or at high-risk of it, while African debt repayments were at their highest level for over 20 years. As the continent entered 2023, headlines were no longer boasting of its economic promise, but rather of what mainstream economists saw as its inevitable “Year of Austerity”.

Many factors connected to the pandemic response are at the heart of Africa’s current crisis, even if many economists choose to ignore them. Some point to the fact that Africa’s long-term loans more than doubled in the 2010s, both across the continent and in specific regions such as Eastern and Southern Africa. In Nigeria, for instance, the country’s external loan value reached $28.57 billion by December 2020, meaning an extra $21.27 billion of debt had been accumulated in the five years before the pandemic.

Yet the reason for the increasing loans prior to Covid was not that the continent was already in economic difficulty. On the contrary, it was the booming nature of Africa’s macroeconomic position before Covid hit that saw it accumulate this debt. In the 2010s, as countries such as Ethiopia saw an increase in GDP of almost 30% per year at some points, economies grew and so did the capacity of African countries to take out new loans to build infrastructure.

This all amounted to fairly standard economics — until the pandemic hit, when these plans were upended almost overnight, and mainstream economists tried instead to blame the impending austerity on overextended finance. First, there was the worldwide collapse in GDP in 2020, which led to an average fall of 4-5% across the continent; while, according to the African Development Bank, one of the very few African countries to ignore WHO policy advice, Tanzania, saw its economy grow by 4.5% that year. On top of this, there was the fall in remittances from the diaspora, triggered by the collapse in service sector jobs in wealthier countries such as the UK: remittances to Africa had surpassed foreign aid in 2019, but fell by 14% in 2021.

The combined impact of these colossal declines in economic activity was catastrophic: in South Africa, 47.2% of small businesses were forced to close in 2020. Meanwhile, global lockdown policies also triggered widespread inflation which long predated the Russian war in Ukraine — even if this has also exacerbated it. All this means that while GDP has started to recover in Africa, its gains are largely wiped out by the soaring price of goods, which makes it harder to keep pace with debt repayments.

This toxic mess created a debt crisis which was predicted from the start. Emmanuel Macron initiated calls to address the debt crisis as early as April 2020, but the plans which were put together failed to address its underlying issues or the continent’s pandemic policy responses. Elsewhere, a number of African countries were wary of taking up the offers to suspend debt repayments for fear it might impact their credit ratings. And with many of the additional loans being offered by the World Bank linked to purchasing stocks of Covid vaccines, rather than anything to deal with the real debt crisis, none of this relieved any of the fundamental issues at stake.

Compounding this is the fact that while income has fallen across the board, the cost of servicing the continent’s debt burden has soared along with the value of the dollar. As it stands, the US has emerged as the one major macroeconomic winner of the global pandemic policy response — and with debts held in dollars, this is catastrophic for low-income countries whose economies have not fully recovered from the carnage of 2020-1.

For most of Africa, the signs are bleak, with some commentators already labelling the policy framework “Structural Adjustment 2.0” — a revamp of the Structural Adjustment Programme (SAP) imposed by the World Bank and International Monetary Fund following the debt crisis in the Eighties. Triggered by the oil crisis of the previous decade, and the spiralling interest rates that followed, this policy came at the worst possible time for newly independent African countries, which had taken out extensive dollar loans to build new infrastructure. The original SAP bailout loans were predicated on the sell-off of African state assets to private (usually Western) corporations, and the erosion of public services on the continent such as healthcare and education. The arrival on the scene of the new NGO industry to pick up the pieces swiftly followed. Why is the West locking down China?

The current situation certainly seems reminiscent of the early Eighties. Then, as now, a decade of booming economies was abruptly reversed by a severe external economic shock. Back then, external lenders “helped” to stabilise debts with SAP 1.0, in return for a fire sale of state assets to predatory external corporations; today, the connection of “bailout loans” to future austerity and asset-stripping (privatisation) was clear right from the outset of the pandemic policy response. Oxfam warned in 2021 and 2022 that the vast majority of the IMF Covid loans to low-income countries were predicated on future austerity. The impact of this was apparent three months ago, following reports that half of the world’s low-income countries had cut health spending during the pandemic. The stark reality is that the global Covid policy response has crippled the continent’s economies, and will result in lowered spending on healthcare for years to come — and all to fight a disease which, given the continent’s median age of 19.7, did not pose a great threat to the vast majority of Africans.

Alongside a looming decade of austerity, a decade of uncertainty is starting to take shape. Last month, Ghana defaulted on most of its international debt, following a crisis that had been brewing for months. Meanwhile, in nearby Nigeria (which faces elections next month), the country’s debt crisis is deemed “insurmountable”. And with debt interest payments for low-income countries projected to rise by 35% in 2023, things are not about to get any easier, increasing the potential for civil unrest.

What this might look like became clear in Senegal’s New Year’s Eve protests, led by young people furious at the release of a report which showed widespread government corruption in the funds released to “deal with the pandemic”. As in the UK and the US, the printing of vast sums of money to chuck at the new suite of pandemic policies was inevitably accompanied by widespread fraud — while, in the African context, producing mountains of debt which now seem almost impossible to repay.

With Senegal’s informal economy yet to show even minimum signs of recovery, this anger can only get worse. As one Senegalese resident told me recently: “If this government seeks re-election, there will be a genuine revolution.” People, he explained, are angry at the corruption of government Covid contracts, at the fact that Covid saw the largest Senegalese government spending in history where there are many other priorities, at the roll-out of policies which have destroyed people’s livelihoods, and at the promise of years of austerity to pay for it all. 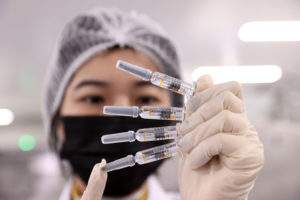 It is true that some silver linings may yet emerge from this catastrophe. In March last year, Ghana introduced a new electronic levy to tax internal money transfers at 1.5%, partly in an attempt to deal with its looming debt crisis. Though the source of much anger at the time, a more stable tax base is surely a prerequisite for building governments which do not require expensive foreign loans to subsist, and could seem like a wise move in 10 years’ time.

For the time being, though, many people are worried as to what the more immediate future may bring. A senior figure in international development recently described the Covid response to me as “the most regressive policy in three decades, and yet no one’s talking about it”. This may change in the year ahead, as the debt crisis becomes impossible to ignore. On the basis of recent events, there is going to be a desperate effort by policymakers to avoid looking at the true causes of this human disaster, and at their role in creating it — but as the recent Senegalese protests suggest, Africans may have other ideas.