As my daughter grows, ever more of our Christmas tree ornaments originate with her: decorated by her at school or preschool, or little end-of-term gifts from teachers. When we decorate the tree, unwrapping each one comes with a little payload of memory from the year it arrived. Recently, unpacking and hanging these decorations, one pulled me up short. It came from preschool, dated 2020. The snowman is wearing a mask.

I stared at it, then I was in tears.

Humans are resilient. Bad things happen, and eventually we move on. But we remember, too. We just wrap those memories up and store them in unexpected places, such as a box of Christmas tree ornaments. 2020 still feels like a blur to me: one long horrible Groundhog Day. But that little snowman abruptly took me right there. Lovingly painted, its little face-mask trying to make something fun of something nightmarish, it captures the heroic efforts of everyone with children in their care. So many parents and carers, making the best of something utterly beyond the capacity of an infant to understand: an official ban on almost all spontaneous touch and social connection.

What does Zoom mean to a toddler? So much of a child’s social world is wordless, conducted in the language of touch, face, and gesture. A loved and trusted other is not a face on a screen but a living, breathing, warm, huggable entity. And for this group, a virus which posed relatively little risk to them meant almost all of this was abruptly taken away. More under-18s died of influenza than Covid-19 in 2020, but we don’t shut the world down for the flu.

We did for Covid. Was it worth it?

How do you calculate something like that? We know that maternal post-natal depression can have lasting negative effects on a developing child. What, then, about the fact that rates of perinatal depression doubled during lockdown, affecting nearly half of all mothers of newborns? What of the children, now toddlers, who didn’t interact with anyone other than their parents for months or even years of their earliest life, and are now developmentally delayed on a raft of measures compared to previous cohorts?

Was it worth it for the millions of children left to scroll unspeakable corners of the internet, unsupervised, for months on end, while their parents tried to keep up with Zoom work? Those all the way up to university age who lost years of education? What about the depression and PTSD that rocketed in kids between seven and 12 between March and June that year? Was it worth that? What about those trapped at home with abusive or neglectful parents?

But just as the downsides of lockdown weren’t evenly distributed, nor were the risks of Covid. Someone elderly or immune-compromised might say: yes, kids were not at great danger from the virus. But why should the demographics most at risk of severe illness and death be recklessly endangered, for the sake of children with their whole lives ahead of them? And this is the nub of the problem. Every human culture prior to our own understood the tragic dimension of human life: that is, the truth that some situations have no good outcome, only messy choices and their painful aftermath. In the Christian tradition, we see something like this in the doctrine of original sin, which holds that we can never make life on earth perfect — because each of us carries a taint of wickedness, and can only hope and pray for salvation.

Nor is this downbeat assessment only a feature in the Christian worldview. We see it, for example, in the ancient Greek myth of Oedipus, a man whose parents sought to avoid the monstrous actions the gods foretold he would take, by abandoning him on a hillside, only to bring about precisely that fate through their actions. In Hindu myth, times of high civilisation and towering achievement are inescapably followed by ages of decline and destruction, before the cycle begins again.

No doubt, for non-Christian and Christian premodern cultures alike, this downbeat view of what’s achievable on earth was informed by being on everyday speaking terms with hunger, illness and death. But a core belief of the modern world is that weighing two competing dangers is a thing of the past. Instead, thanks to the wonders of innovation and rising prosperity, we can defy gravity and have all the good things at once — even things that previously seemed in conflict. Powered by cheap fossil fuels, we convinced ourselves we were on our way to eliminating hunger and illness, and could set our sights on death itself. And among all the other things fuelled by cheap energy, perhaps the most pervasive has been the conviction that we could escape life’s tragic dimension.

We could have freedom from family obligations, while ensuring the old and young were cared for. Rising prosperity replaced the duty to welcome the stranger, and the injunction to love your neighbour. We could be intensely relaxed (as Peter Mandelson famously put it) about some people getting filthy stinking rich, because some of that money can be collected in taxes and redistributed. And we could do this while leaving everyone free to pursue their own vision of the good. As long as we adopt the same overall rules, and accept the same bits-and-atoms understanding of what’s real and important, we can be as values-pluralistic as we like.

“Progress” means, in a nutshell, the ability to trade in-person social bonds for freedom, while our basic needs are met via paid-for services and labour-saving machinery. In other words, technology replaced moral frameworks, or rather became the moral framework: a machine theology. In this worldview there are no moral choices, only rational ones. Its corresponding mode of governance is technocracy, where the legitimacy of political choices rests in their adherence to “evidence” and “data”. And humans, too, are unconnected atoms: you’re a person to the extent that you can be free, with no obligation to share values or social codes. 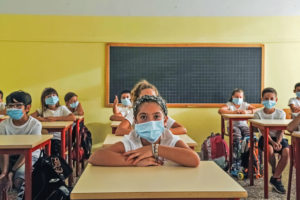 The tyranny of a Covid amnesty

Except it turns out that there are still situations where we can’t just “do our own thing”. When each of us is a potential disease vector, everyone else absolutely has a stake in what we do. And at the collective level, sometimes there’s no “neutral” option. Faced with a rapidly-spreading virus of still-unknown severity, doing nothing is as much a decision with consequences as making active interventions.

So Covid presented a new universe of tragic choices. But we had little mental furniture for grappling with them. No wonder so many ended up hiding behind “science”, and sought to justify their preferred policies in those terms. But the truth is that no one is very rational when lives are in danger — and so the pandemic exposed the underlying, enduring truth that data-driven decision-making can only ever be a fig-leaf for the real business of governance, which is tragic moral choices.

How do you weigh incommensurable alternatives, where every side has horrible trade-offs? How do you weigh granny’s life against a generation of developmentally-delayed babies and toddlers? Short answer: you can’t. At least, there’s no way of doing so rationally, using data, without some kind of moral framework.

And from this perspective it’s easier to see why we accepted the choices we did — or at least found ourselves at a loss to protest, even if it felt wrong. For what we needed to navigate Covid were the very moral frameworks we’ve spent so long carefully dismantling, in favour of moral pluralism underwritten by the lonely unity of machines and the market. No wonder, then, that when in-person contact suddenly seemed a danger to life, we told ourselves all of it could be replaced with money and machines — for money and machines are the moral framework now. And no wonder we looked away from those groups for whom in-person contact is life.

We accepted the sacrifice of almost all in-person social contact, on our children’s behalf, for months on end. In some parts of the world, it was years. Perhaps, accustomed to a machine theology that dismisses relationships as an optional extra, we didn’t think it much of a sacrifice. It was a moral choice, founded in a culture that insists everything inconvenient about love can be replaced by money and machines. But we didn’t defy gravity. Instead, the heaviest burden fell on the slightest shoulders. Now, we’re living with the aftermath. Two Christmases on, I’m still feeling the disintegrative aftershocks of Covid in my own family, and a sudden reminder of 2020 in the Christmas box can leave me choked. As inflation soars and everyone hunkers down, we’re feeling it at a national level too.

That little snowman will go back into its box on Twelfth Night. But we can’t just pack away the memory of that fearful, isolated time — especially as China faces its long-postponed reckoning with Covid, driving fears of new variants spreading overseas. We can’t just forget again what it was like to see a generation of children stripped of social worlds they couldn’t do without. A generation of the young, two years older now, living with the cost of our refusal to defend love in the face of death. As families gather for another Christmas, we must say: never again. That experiment can never be repeated.