Since Russia’s invasion of Ukraine, Western leaders have gone out of their way to condemn Putin and express their solidarity with the victims of the conflict. And yet, one cannot help but suspect that behind closed doors they are raising toasts to the Russian President.

After all, this war is nothing less than a godsend for Western elites. Domestically, it is a well-known fact that periods of international crisis or war tend to bolster the popularity of a country’s government or political leaders (the rally-around-the-flag effect) — especially if the country in question doesn’t actually have boots on the ground, and therefore coffins returning home, in which case it’s all gain and no pain.

You might remember the eerily prescient 1997 satire Wag the Dog, in which the US president enlists the help of a Hollywood producer to fabricate a fictional war in Albania to distract voters from a sex scandal in which he’s involved. Every major Western leader could do with a similar booster shot. Joe Biden, Boris Johnson, Emmanuel Macron, and Justin Trudeau have all been performing abysmally in the polls, due in no small part to their disastrous (if not outright authoritarian) handling of the pandemic and its social and economic fallout.

The latest data shows that the rally-around-the-flag effect is already working its magic: approval ratings for all Western leaders have registered a significant bounce since the beginning of the war. Biden has enjoyed the best makeover of all, going overnight from Sleepy Joe — the embarrassing grandad known for farting at parties — to “leader of the free world”, as he self-styled himself in his State of the Union address last week.

But there’s more at play here than a few percentage points in the polls. On a deeper level, we seem to have entered a particularly decadent stage of Western capitalism. Today, ruling elites are increasingly unable to generate societal consensus or hegemony in either material or ideological terms — due to neoliberalism’s innate tendency towards ever-growing levels of capital concentration and its disdain for democratic participation and empowerment — and are therefore forced to rely on repressive and militaristic measures in order to remain in power and stifle any challenges to their authority.

Hence their need for a more or less permanent state of crisis or emergency capable of justifying such measures. Which might help explain why the West seems to have been mired in a perennial state of “crisis” for much of the past 20 years: the post-9/11 global terrorism crisis, the post-2008 financial-economic crisis, the pandemic crisis and now, just as the latter seemed to be waning, the military crisis in Ukraine. All this against the background of a worsening climate and ecological crisis. Indeed, “crisis” no longer represents a deviation from the norm; it is the norm, the default starting point for all politics in the West.

In this sense, the framing of Covid as a “war” — the ultimate state of exception — was no accident. But nothing beats a real war when it comes to rallying people around the status quo. This moment is bound to exacerbate the worrying trends that have emerged during the pandemic: the consolidation of the media, the blatant resort to crude propaganda, the shutting down of any meaningful form of public debate, the “cancelling” of dissenting voices, and the demonisation and criminalisation of whomever happens to be the public enemy of the moment — yesterday the unvaccinated, today the “pro-Russians”.

Covid has created a capitalist nightmare

At the international level, the weaponisation of the suffering of the Ukrainians might prove even more beneficial to Western elites. Their order isn’t merely in an internal crisis but externally as well. It’s threatened by the rise of new regional powers — first and foremost China but to some extent Russia as well. In the US, they still struggle to accept that the “unipolar moment” is over. Our world is multipolar, whether the State Department in Washington likes it or not. The crisis in Ukraine is in many ways a result of this collective denial, of the West’s inability to conceive a new order, and of its foolish dream of somehow turning the clock back to the Nineties.

By meddling in Eastern Europe, and ignoring Moscow’s security interests, the West invited conflict in Ukraine. It’s worth noting that the US is now adopting against China the same strategy of military encirclement that ended up triggering Putin. When a similar crisis breaks out with China at some point down the road nobody should be surprised.

Events in Ukraine make such a conflict increasingly probable. And that is because they offer the West and its military-industrial apparatuses the perfect excuse to whip up a new Cold War and militarise Western foreign policy, under the guise of defending the “free world” from a new Russo-Chinese Evil Empire. It also helps that billions of dollars are waiting to be made in the process. Indeed, arms manufacturers are licking their lips at the prospect.

The consequences for Europe will be profound. From the perspective of the US, it prevents the strengthening of Russian-European relations and the rise of a Eurasian geopolitical reality. It allows the US to reassert its hegemony over Europe, in particular Germany. Indeed, several commentators have argued that the crisis in Ukraine was partially manufactured by the US in order to torpedo the controversial Nord Stream 2 gas pipeline. 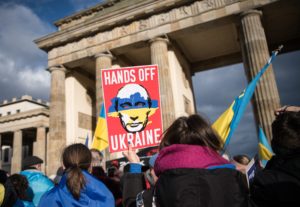 That pipeline was vehemently opposed by every element of the US establishment, from Joe Biden to Donald Trump. It’s no secret that thanks to the “shale revolution” the US is now a direct competitor of Russia in the field of natural gas exports. But even more importantly, the US feared that stronger, friendlier relations between Germany — and with it the rest of the EU — and Russia would have chipped away at Europe’s reliance on the United States’ security umbrella.

Well, as a result of recent events, the pipeline has been shelved once and for all. In fact, the talk in Europe is how to “decouple” once and for all from Russian gas (that’s if Putin doesn’t decide to turn off the tap beforehand). This is a double win for the US. Europe is likely to pivot towards the US for its gas imports as relations with Russia grow colder. And tensions with Russia have already boosted European support for Nato, which had become lukewarm in recent years. The result: the US maintains its military stranglehold over Europe.

It’s worth remembering that not too long ago Macron diagnosed Nato as being “braindead” and called for Europe to build its own common defence system. Both France and Germany reacted with the diplomatic equivalent of disgust to the new security pact between Australia, the US and the UK (AUKUS). That’s a thing of the past: now European leaders are once again lining up to pledge their unconditional allegiance to Nato — and to bolster their military spending and thus their contribution to the Alliance. Consider Germany’s foreign policy pivot — the announcement that it will be increasing its military spending to over 2% of its GDP in direct response to the situation in Ukraine. Sweden and Finland have reportedly given consideration to joining Nato; Switzerland is ending its neutral status and joining the EU’s sanctions on Russian assets. Even Ireland, neutral for a century, is considering joining Nato. Increased military spending in Europe means more US military hardware entering the continent. Moreover, the crisis along Europe’s eastern flank, should it be prolonged, will inevitably hamper trade relations with China. For America the geopolitical view looks cloudless.

The EU’s political autonomy will be reduced, to the extent that military considerations — determined in Washington — will trump other concerns. It will now be far harder for the EU to punish countries like Poland and Hungary for alleged deficiencies in their “rule of law” given their strategic importance for Nato. As Wolfgang Streeck writes: “In short, as Western Europe is returned to “the West”, the EU is reduced to a geoeconomic utility for Nato, aka the United States. The events around Ukraine are making it clearer than ever that for the US, the EU is essentially a source of economic and political regulation for states needed to help “the West” encircle Russia on its Western flank… The implication for von der Leyen and her crowd is to confirm their subordinate status”.

That’s not to say that the crisis is not an opportunity for EU elites as well. It offers them a chance, at last, to push ahead with plans for a “common defence policy”, something Macron has been advocating for a long time. The issue had been contentious, both in Washington — where it was feared that a militarily independent Europe would be less reliant on the US – and in Berlin, which was sceptical of helping France use the EU as a cover for its global ambitions. Public opinion in Europe never embraced the idea. How the EU destroyed Italian democracy

However, the conflict in Ukraine has swept away any doubts. For the first time ever, the EU is supporting member states as they supply military equipment to embattled Kyiv, mobilising €500 million under the European Peace Facility. This is a classic example of the EU’s long standing integration-through-crisis strategy: exploiting moments of public fear and disorientation to surreptitiously deepen an integration process that lacks popular support.

From the US perspective, such plans don’t represent a direct threat at the moment, so long as Europe’s military machine remains under the effective command of Nato. Whether they will create transatlantic tensions down the road remains to be seen. For the peoples of Europe, neither option is particularly appealing. Either a European army under the aegis of the US security establishment or one under the aegis of France and a remilitarised Germany? Whatever happens, arming the EU — an institution as undemocratic and oligarchic as they come — remains a bad idea. But war is a racket, as US Marine Corps Major General Smedley D. Butler famously claimed, and no one wants to be left out.