What has happened to literature’s manly men? Hemingway, arguably the most masculine of writers, ran repeatedly toward danger throughout his life — along with any other intense experience he could find. This done, he’d write about it: both fiction and nonfiction, covering “manly” topics such as hitmen, boxing, fishing, hunting, bullfighting, racing and extreme sports.

War, the subject of Hemingway’s two most famous books, is perhaps the quintessential subject of such manly writing. From the Mahabharata to the Iliad, it’s the central theme in the ancient world’s most immortal works. But something has happened to war-lit: first, the industrialisation of fighting, which Hemingway himself lived through and documented; then, the development of war technologies so terrible that battle itself came to seem unthinkable.

The world that has emerged since is in many ways (or at least in many places) a safer and more peaceful one. But what has become of those men who actually like danger, and for whom warfare has always been a proving-ground?

Some are still running into danger. There was a surreal echo of Hemingway’s love of danger in a recent wave of young Americans joining a conflict overseas, and then (albeit with less positive consequences) documenting it.

Hemingway was among the thousands who travelled to Spain between 1936 and 1938, to support the Republican side against Franco in the Spanish Civil War. In February, Ukrainian president Zelenskyy issued a formal call to foreigners to join an “international brigade” fighting for the Ukrainian side against Putin’s invasion. At least according to Ukrainian reports, an estimated 20,000 have signed up to help — and many view what they’re doing as fightback against “a 21st-century version of fascism”.

You would think the Weird Online Right, the contemporary subculture most concerned with masculinity would approve of this risk-taking. A recurring theme in such spaces is the perceived subjection of manliness to the shrunken, heroism-free horizons of modern life and the culture of “bugmen” it has produced. Perhaps the most influential sacred text of this subculture is Bronze Age Mindset, an unclassifiable “exhortation” written in 2018 and now immensely influential among disaffected young men.

Written by the pseudonymous Bronze Age Pervert, it blames modern comforts and the undue influence of women for the stifling and emasculating nature of modern life: “In fact everything that you hate about modern life and that makes it into an Iron Prison … represents a return of the endless sallow night of matriarchy.” BAP extols the virtues of pre-Christian heroes of antiquity, and predicts that “Leviathan will not be able to hold itself together” whereupon “the age of high piracy will return”, enabling the men capable of it to develop “their ability to wage war”.

But instead of lauding their bravery, the Very Online Right tends to dismiss Zelenskyy’s resistance as a “fight to the death for globalist oligarchs like Soros and Kolomoisky” and mock any evidence of fear, regret or incompetence displayed by the young foreigners flocking to help. This so-called “Reddit Battalion” has been widely mocked for having reportedly compromised operational security on the battlefield by continuing to post from their phones while in a warzone: their compulsion to document their experience emitting signals allowing their location to be pinpointed and shelled. What men get wrong about masculinity

What’s going on here? One response might be that simply proving oneself as a man isn’t the only consideration in battle, and if you are there in service of a despised political agenda, you’re still not one of the good guys. But there’s something deeper at work, too: an ambivalence about the idea of masculinity and writing as such that runs through the conflicted contemporary debates about men, warfare, heroism and propaganda that now orbit the conflict in Ukraine.

For while Hemingway is long since a byword for “masculine” writing, there’s also a tragic sense in which his work traces the Twentieth-century demise of an older, more warlike form of masculinity, at the hands not of the “endless sallow night of matriarchy” but of technology itself.

War literature prior to the Twentieth century is often unabashedly heroic, even as it documents horrors. Tennyson’s 1855 Charge of the Light Brigade describes an 1854 battlefield in the Crimea in terms both terrible and stirring, then asks:

When can their glory fade?
O the wild charge they made!
All the world wondered.

“When you go to war as a boy you have a great illusion of immortality,” Hemingway wrote in 1942, of his experiences as an ambulance driver in World War I when he was just 19. “Then, when you are badly wounded the first time, you lose that illusion.” The war that deprived Hemingway of his illusions about immortality also stripped many of confidence in military glory full stop.

Wilfred Owen’s Dulce et Decorum Est, published 1921, draws a contrast between the heroic motto about dying for one’s country, and the reality of dying of poison gas in the trenches. In 1935, Hemingway expressed the same sentiment in an Esquire essay, where he stated that “in modern war, there is nothing sweet nor fitting in your dying. You will die like a dog for no good reason”. Even so, to Hemingway the Spanish Civil War was a clear-cut moral issue: a battle between good and evil, man and machine, via the horrifying industrial technologies of Twentieth-century total war. And if, as some historians argue, this conflict was in fact the true start of the Second World War, what started as a battle between man and machine ended with the machine’s victory, in the bombing of Hiroshima and Nagasaki.

A whole generation, slightly older than I am, grew up in the shadow of Mutually Assured Destruction: the fear that either (or both) sides in the Cold War might at any moment launch unstoppable nuclear-powered death through the air, obliterating millions in seconds.

Over the same period, conflict between nuclear powers avoided direct confrontation. Armies have shrunk, nationalism has been widely deprecated, and the world (unless you’re unlucky enough to live in a theatre of one of America’s or Russia’s proxy wars) is generally more peaceful than in Hemingway’s youth.

And while that has many upsides, it has also, paradoxically, created disaffected young men. For when national identity is infra dig, and open warfare is discouraged lest it set off nuclear Armageddon, what’s left for young men who thirst for danger and intensity?

Some find it anyway; some, too, also write about it, including my UnHerd colleague Aris Roussinos. As he said in 2014 of his experiences in Syria: “The hidden awful truth about war is how much fun it is.” But for those in the developed West, this is the exception rather than the rule. Most men remain in the “Iron Prison”. Many chafe at it, and seek to reclaim some form of masculinity, but few seem very certain as to how this might be done in practice. 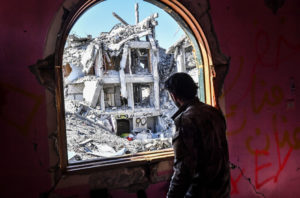 Lessons from a war zone

Some, too, write about the stultifying nature of the world in which they remain. Two realist writers emerging from the disaffected online Right are the short story writers “Delicious Tacos” and “Bad Billy Pratt”, both of whom document the nihilistic landscape of contemporary sex relations in an aggressively unsentimental style. And it’s hardly surprising that writers committed to (as Pratt put it to me) “the unfiltered truth” should focus on the sexual anomie of self-absorbed protagonists.

After all, modern life has become — in BAP’s words — “an economic zone arranged much like a work camp”, a regimented place “of incredible ugliness” and “hateful to the raising of boys”. It’s easy to see how, as Pratt himself might conclude, “the only fiction worth writing is incel fiction”. What, in that context, is left but the self, and the sexual warzone?

And with heroism, action or drama in short supply in everyday life, those hungry for intensity must resort to the world of computer gaming — or fantasy writers such as Mike Ma, described as “Chaotic 21st century pastiche of Hemingway, Kierkegaard, Kaczynski, and the guy in your econ class who wears combat boots”; or else the neo-reactionary sci-fi writer “Zero HP Lovecraft”, a “horrorist” whose self-published short story collection sold out in less than 24 hours.

Hemingway began his life in the shadow of Tennyson’s Light Brigade, and finished it in the shadow of Hiroshima. Over the same period, the raw, elemental struggles between man and man, or man and nature, so characteristic of Hemingway’s work, grew more attenuated. His literary career was both as a “masculine” writer, but also as an elegy for a world where the conventionally masculine virtues of courage, risk-taking, stoicism and heroism were easily celebrated and widely accepted as culturally essential.

The importance of Bronze Age Pervert

Since his time, the world has retreated steadily from conflict, toward mechanised and then mediated life; a process culminating in the radical safetyism and dematerialised common life of Covid lockdowns, and the online-first social life the pandemic ushered in. And now that we have virtualised social life to the point where any physical violence is foreclosed, even most arguments about masculinity now inevitably take place in the feminine key.

Young men, already restive, are growing mutinous under this regime. The lurid and angry literature emerging captures these men’s ambivalence: sickened by, but also usually still implicated in, the banality and perceived effeminacy of a modern world denuded of both danger and opportunity. We can only speculate on what may happen if (or when) such men leave behind the neutered disaffection off the internet, and start searching en masse for danger and heroism beyond the screen.