I buried Robin Hood in his favourite place, the little paddock beside the Dulas. Across the brook, a blackbird sang requiem. Maid Marian was there, of course. She was, after all, his number-one wife. I shed no tears; I’d done my crying when the local vet, Peter Jinman, had informed me there was no hope. Robin Hood had irreversible anaemia due to a semi-tropical disease. The incomprehensible incongruity of it all was part of the hurt: the Dulas wanders its way in very English Herefordshire.

I liked him. And I think he liked me. There were times when he would deign to let me rub him under his chin as he stood four-square, head jutting forward. He was imperious, as if conscious of the glorious history attached to his kind. Ryeland sheep: first bred in the fifteenth century by the monks of Leominster Priory. Robin Hood was not just a sheep in a Welsh Marches paddock. He had ancestry — breeding, you might say.

It is odd how little most of us know about sheep, given how deeply entrenched they are in our culture. The Greek astrological sign Aries is a ram. In nursery rhymes, “Mary had a little lamb”, and “Baa-baa black sheep” was asked if he had any wool. On the screen Aardman’s Shaun the Sheep has gambolled about entertaining families for decades. On Easter cards lambs are no less frolicsome each passing year.

Those same little lambikins get slaughtered before they are a year old. On the supermarket shelf they are reduced to abstract, packaged commodities. To cope with this glaring contradiction — Little Gambolling Lamb in Field v. Big Rack of Lamb in the Oven — we downplay sheep’s intelligence and individuality. Hence the traducing expression “to be a sheep”, meaning to be a dumb, passive follower. Even a man as sensitive and attuned to nature as George Orwell made the sheep in Animal Farm the stupidest of the stupid, who go from mindlessly chanting “Four legs good, two legs bad” to “Two legs good, four legs bad”. When it comes to sheep, then, we suffer what psychologists call cognitive dissonance.

Or we blank the treatment we give them. Once upon a time, sheep were always raised outside in the fresh air, in a system that would, in today’s terminology, be called “extensive”, even “organic”. More than ten million sheep are now stuck in factory farms worldwide; sheep are also used extensively in biomedical research. About 24,000 are used annually for a range of purposes, from the study of Huntington’s disease and heart conditions to orthopaedics, organ transplants and genetic research (including cloning). There was a time when sheep were used in Argentina as fuel, their bodies thrown into furnaces. Like logs.

My family began farming them 800 years ago. Since I started, 25 years ago, I have learned that sheep are curious things. And sheep farming is a curious old business, where one can become attached to, loving, even, of animals raised for sale, for the pot. That has always been the case. As the Old Testament, which knew a thing or two about shepherding, tells it in II Samuel:

The poor man had nothing, save one little ewe lamb, which he had bought and nourished up: and it grew up together with him, and with his children; it did eat of his meat, and drank of his own cup, and lay in his bosom, was unto him a daughter.

So, my fondness for Robin Hood was not unusual, and I believe spoke of the way we should treat sheep. With respect. That is how sheep farming used to be. And should be again.

Robin Hood was easy to know and like because the species barrier between sheep and humans is gossamer thin. They are more like us than we may care to know. Sheep form friendship bonds, as well as family and flock ones.

I have made mistakes over the last 25 years, some terrible. I once had to put an injured sheep out of its misery. I did so in the corner of a field, but still in view of the flock. After the blast from the Lincoln 12-bore shotgun, the sheep changed their relationship with me. No longer was I the nice guy who gave them food; I was the killer. Far from crowding around me on my arrival in the field, they kept up the safety distance of wild animals. Our relationship had gone bust. It took months to heal, because sheep remember.

I understand the ethical objection to sending a lamb to the abattoir. (I don’t like the process either, and don’t do it any more.) In the good old days, a sheep would be raised to productive adulthood and only eaten when this time had expired, which was about the length of its natural life: five to seven years.

When I used to kill lambs, I would look into the eyes of each one, to remind myself of their value and their beauty. And they were gorgeous: spotted black and white, their tight curly wool gleaming, their horns curling in geometrically exact spirals. But now, I will no longer have lambs slaughtered for meat. I will, however, defend sheep, and sheep farming, together with the on-farm slaughter of (mature) sheep. It is the right way for a sheep to die, in the right place — which is its home. But today it is compulsory for all animals entering the food chain to be slaughtered at a licensed abattoir. The number of abattoirs is insufficient, however, meaning that animals have a long trip, packed tight in a trailer to the slaughterhouse.

Stress, as well as being cruel to the sheep, produces excesses of lactic acid, meaning the meat becomes ill-flavoured. Frequently, the animals sense their destiny at the abattoir and struggle to escape. To persuade sheep into the killing chamber, slaughterhouses use a trained “Judas sheep” to entice them forwards.

Sheep deserve a decent death, and there should be no more stressful, long-distance transport to a fear-reeking abattoir. “On-spot slaughtering” by high-velocity rifle has been successfully campaigned for in Switzerland by animal welfare association Four Paws (Vier Pfoten Schweiz). This method is already used in UK for “farmed” deer.

On-farm slaughter has the singular advantage that the sheep are less stressed before death. I’ve seen an apprentice butcher kill my excess rams while they were eating beet pellets as happy as Larry the Lamb. The shooting was so quick that the four were all mid-munch when they dropped dead, all in a row. I would not mind going the same way. 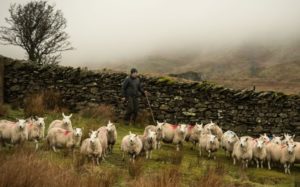 Why doesn’t Britain value its farmers?

Britons eat 306,000 tonnes of sheep meat each year. This equates to approximately 1,041,000 sheep killed per month. Paradoxically, this keeps sheep alive. Why do so few care about the sheep breeds that have disappeared off the face of the Earth as decidedly as the Dodo? Such as the Scottish Dunface. I have decided to eat more meat from our remaining native and rare breeds to do my bit to help preserve them. After all, I like sheep, on the plate and on the hill. It is possible to have your sheep and eat it. To have happy meat. It all depends on how the sheep are farmed.

I am not pretending to be noble. Being a shepherd has entirely selfish aspects; there’s a romance to shepherding which is entirely absent from pig and poultry farming. In a time of technology, in a time of cities and disconnect from the countryside, shepherds, male or female, feel themselves to be the last of a breed: hard, solitary individuals doing real graft out in the elements. It’s almost heroic.

I love cattle and pigs, I have a deep affection for chickens and geese, but sheep are special. It’s there in the Bible. Jesus is the “lamb of God”, not His calf, His piglet, even His kid. I suspect it’s the dependency, the fact that sheep require such close care. Humans are hard-wired to want companionship, but also to protect their kith, kin and charges. Sheep, especially their gentle offspring, fit the bill like no other farmyard animal.

Extracted from The Sheep’s Tale by John Lewis-Stempel, Doubleday