When I began writing for UnHerd, I was a nobody with an anonymous Twitter account. That’s less the case now, which is nice in many ways. But there’s a lovely facelessness, and freedom to reinvent yourself, that I miss about being anon. It has left me wondering: is online anonymity really the reason our public conversation seems to have gone mad?

Is the anonymous internet really just a breeding-ground for nutters, extremists and people whose hobby is harassing MPs? That’s the fear behind a recent petition, signed by nearly 700,000 people, calling for the Online Safety Bill currently making its way through Parliament to require anyone creating a social media account to provide verifiable ID.

The petition will be debated later this month. Defenders of anonymity will doubtless point to its importance as a free-speech outlet for whistleblowers, or for those who don’t have much public clout and wish to speak their minds in the “cancel culture” age without repercussion. But how much longer will it last? For free speech no longer commands wide institutional or even public support.

That doesn’t mean I’m against online anonymity. Far from it: last week I cracked and created an anonymous “alt”, out of nostalgia for that feeling of wandering the internet’s weird byways without a comet-tail of public selfhood trailing after me. But our growing unease over the accelerating weirdness and perverse incentives of our digitised public conversation needs to move on from a simple focus on “free speech”.

It’s not a coincidence that for some time now, public support for online censorship has grown steadily more overt on both sides of the Atlantic. And how could it be otherwise, when the entire medium of digital debate encourages ideas to adopt the most extreme and lurid form possible in order to cut through?

Digital culture embraces an increasingly voyeuristic online dynamic, a “pornography of the self” — a perverse set of incentives, that encourages already fragile personalities to offer themselves up as an ongoing psychiatric spectacle, in exchange for money and attention. The results may not be sexual, but have a tendency to grow steadily more grotesque. This can converge with actual pornography, and culminate in outright atrocity, as when seven people were arrested this week following discovery of a bizarre cult that live-streamed human castration for paying viewers.

The ratchet toward this kind of monstrous spectacle is captured by a TV trope named after Simpsons character Ned Flanders. In the early series, Flanders is an amiable and slightly cringe Christian neighbour. But over the programme’s history, Flanders’s character becomes ever more exaggeratedly focused on his faith. The trajectory is so pronounced it’s given rise to a TV trope: “Flanderisation”: whereby a comic character becomes ever more grotesquely defined by a single trait.

Over the last couple of years, pandemic restrictions have virtualised ever more of our personal, social, romantic and professional lives. And with it, something like “flanderisation” has spread. It’s not as though “real life” has disappeared, exactly; but the relation between “real” — that is, non-digital — life and the public discourse has grown steadily more lurid and strange.

It’s not as though Technicolour tabloid headlines are a new phenomenon: the immortal Sun splash FREDDIE STARR ATE MY HAMSTER ran in 1986. And the term “attention economy” was coined even earlier, by Nobel Prize-winning economist Herbert Simon, in a 1971 article. Here, Simon explored how to build organisations in a world saturated by information, arguing that attention is a key bottleneck in human culture. That is, the more abundant information is, the scarcer attention becomes as a resource.

Simon believed that people could learn to allocate their attention “efficiently”, among “the overabundance of information sources that might consume it”. But if information felt over-abundant to Simon in the Seventies, that flood became a tsunami with the arrival of the internet. And with that escalation, we’ve been forced to abandon the idea that there’s anything very efficient, rational or wise about how we allocate our attention.

In the brutal competition for clicks, attention is allocated not by reason or efficiency but flanderisation. You can reach a relatively small audience of serious-minded fellow-travellers by weighing an issue thoughtfully and talking reasonably. But for widespread engagement, you need red meat. Scandal; fights; larger-than-life characters; absurd propositions, bad-faith arguments defended to the death. The more grotesque, simplified and caricatured, the more likely it is to cut through.

In this landscape, topics that have serious ongoing repercussions but resist flanderisation will sink without trace. For example, the mere words “agricultural subsidies” will be enough to send many fingers clicking instantly away — and yet the nuts and bolts of post-Brexit farming policy impact millions.

We have all lost the argument

But it’s an issue where the devil is all in the detail. Outside specialist publications, the only way to make people notice would be to flanderise — a difficult task in a complex subject. A spate of farm fire-sales or farmer suicides might attract brief attention. You might get a whole ten minutes of discourse out of a proposal to improve biodiversity by reintroducing wolves in Britain. In the meantime, though, complex issues with major long-term ramifications for the whole country, such as topsoil erosion or upland subsidy regimes, remain of little interest to the general public. Our long-term food security, biodiversity and rural economy are poorer for it.

This fundamental failure of seriousness in public conversation extends even to the question of how we conduct that public conversation. Even as the Online Safety Bill has continued its lurch through Parliament, with the contours of our entire digital discourse at stake, the press focused its investigative energy on whether or not Boris Johnson had a birthday party during lockdown.

The Bill contains provisions to tackle a range of negative aspects of digital discourse, including trafficking, online abuse, and child pornography. But like all regulatory issues with systemic impacts, it’s difficult to persuade people to think about the fine detail — even MPs — and the Bill itself has been under fire from all fronts, including the parliamentary committee set up to scrutinise it.

And when it does manage to consider the issues, they are flanderised. And perhaps the central such over-simplification concerns freedom of speech — for in truth the “free speech” ship sailed a while ago. And if widespread public and institutional support for the idea is waning, this has a simple cause: the digital era has turned what was once a generous ocean of ideas into a grotesque Marvel Studios cartoon sea-battle, between flanderised caricature concepts.

In the resulting bare-knuckle war for attention, it’s not reason that wins. Nor is everyone saying that the best, sanest, or most constructive ideas will prevail. Rather, it’s the most lurid (or aggressively state-sponsored) ideas that make it to the surface, a dynamic which does much to account for absurdist identity politics, hyper-polarised Covid discourse and the roiling underbelly of online extremisms alike. In that noisome soup, anons may be nutters or extremists — but sometimes they’re really just people who prefer to wander the weird byways and be left alone.

Because it’s also not just politics that gets flanderised. Having an online presence, as an individual, creates a similar incentive to flanderise ourselves: that is, to turn your online “self” into a caricature, based on compulsively oversharing whichever features of your personality are the most attention-grabbing. And while this pressure affects everyone, it’s still greater — as I’ve discovered — if you post under a “real” identity.

For young women, that might mean incentives to garner online attention by posting sexualised selfies. For those not blessed with looks or opinions, but willing to invite voyeurism, another option is a warped version of the common human bonding mechanism of sharing personal information: pornography of the self. Those who embrace this online are often women. But the result is less bonding or intimacy than flanderisation: a kind of ritual self-humiliation for clicks. 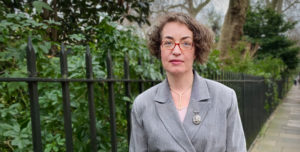 If you have the stomach for it, a glance at how “e-girls’ are discussed on the lolcow website gives a sense of how such compulsive over-sharing often results less in friendliness or bonding than in cruelty and objectification.

In turn, this toxic dynamic (rightly) fuels concerns about online abuse — as well as calls for online anonymity to be banned. The petition to include provisions outlawing anons will be debated later this month; will it rehash the same old free speech ground again? If it does, we can expect it to be even more reductive and polarised than last time: because the real danger we face isn’t restrictions on speech.

And nor are anons the problem. Let people wander the weird byways and be left alone, even if they’re nutters or extremists. The internet’s flanderising power would be no less real if anonymous accounts were banned across the board tomorrow.

The real risk is that we go on getting lost in stupid arguments, over shiny but trivial talking-points, and never get the hang of parsing what actually matters in the torrent of information overload. For more serious political currents still run, often with dangerous undertows, beneath the surface of our digital discourse.

If we don’t learn to parse those patterns, we’re entirely at their mercy.