“Russia says some troops returning from Ukraine border,” blasts the update from the BBC. My phone buzzes feverishly: WhatsApp and Facebook ping; Twitter DMs light up my screen; Signal messages come in from Ukraine and Russia. It will only get worse when the US wakes up.

After weeks of looking like Russia was going to invade, Putin now seems to be backing down. Why?

Firstly, we can’t get too complacent — that “some” in the BBC headline is doing a lot of work. Russia is not going home completely; rather, what it has done is given a major signal that it is de-escalating.

And this shouldn’t come as a surprise. From the beginning, the talk of Russian invasion that has filled the Western media has been irrational. Technically, any incursion into Ukrainian territory by Russian forces is an “invasion” — and Russia is already occupying the Donbas region in the east of the country. But between that and “marching to Kyiv” lies a geopolitical and military gulf.

Throughout the past month, Russia only ever had around 100,000 troops on the border. That may seem like a lot, but as the former British soldier and military analyst Mike Martin has pointed out, it is nowhere near enough to take all of Ukraine, let alone hold it. Then there’s the international backlash that would follow — as well as the fact that there’s no appetite among Russians for conquering Ukraine, as there was for thieving Crimea. 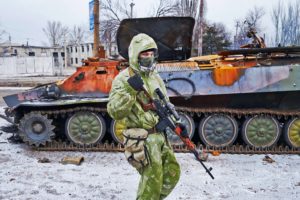 But while the press coverage has been a touch hysterical, for once you can’t blame the media. They’ve taken their lead from the politicians — and none more so than Joe Biden, who for weeks has been telling the world that Russia would invade. So adamant (many would say feverish) was the US President on this point that his Ukrainian counterpart Volodymyr Zelensky had to plead with him to “calm down the messaging” in a recent call between the two.

And it wasn’t just the talk. The US began evacuating its embassy staff, which soon created a domino effect of scuttling diplomats across Ukraine’s capital Kyiv. Even the Israelis started getting diplomats’ families out — something they almost never do short of full war. I confess this is when I began to entertain some doubts. Washington had kept its diplomatic staff in Kyiv during the height of the fighting when Russia first invaded in 2014. I should know: I met with its then-US ambassador Geoffrey Pyatt in his office just after Russia launched a major offensive.

But contacts in DC put this down to the scars of the recent Afghanistan evacuation; according to one source, Jake Sullivan, Biden’s National Security Adviser, almost collapsed with the stress during the calamitous withdrawal. Never again would the US allow itself to evacuate its people in total panic at the last minute with enemy forces closing in all around and the entire world watching.

Frankly, I found it all a touch embarrassing. And this, I think, is the point. It is impossible to know what calculations factor into Putin’s thinking, but there is a long record of what he has said — and nothing is more instructive than his comments in his 2005 State of the Nation address to the Russian people, when he called the collapse of the Soviet empire “the greatest geopolitical catastrophe of the century”. Now Putin is not stupid. He knows the USSR is never coming back. What he intended, I think, was to lament the loss of his country’s superpowers status, prestige, and respect. But here’s the thing: it is tough to be a superpower when your GDP is half of Britain’s; when you can’t fight the US in a conventional war because you know you’d be hammered; and when you live in perennial fear of China stealing the eastern part of your state.

So if you can’t actually be a superpower that can match the US, then what’s the next best thing? Well, you can act like one — especially if you sense weakness in your enemy. Putin began amassing troops on the Ukrainian border soon after Biden — a man the Kremlin thinks is old and weak — took office. Once that happened, he got Biden’s attention and it has never wavered since. Biden asks for meetings and calls. He expresses his willingness to talk to Putin any time and any place. That’s the most powerful politician in the world — and a traditional modern enemy — pretty much at your beck and call. That’s Russia being a world actor. That’s prestige; that’s status.

And while you’re there, why not remind the Europeans — especially the German government — who heats their voters’ houses? Get the new Chancellor of Germany in and make sure he knows the score. Get Emmanuel Macron to come round and plead with you, while you make him sit at the other end of a long table like a supplicant. Get one of your underlings to insult the British Foreign Secretary. And perhaps most importantly, get Ukrainian officials to say the country will never join Nato — which is of course what you fear more than anything else — and do it all without firing a shot, without marching to Kyiv, and without the inevitable sanctions and diplomatic isolation that would follow. Don’t think this is the end, though. Far from it. BBC News headlines now squawk Nato’s warnings that there is no sign of Russia de-escalation. The Sun shrieks that a huge dawn invasion is set for today. The Kremlin, meanwhile, says troops that have been on “exercises” are returning to base. Back and forth and up and down the troops go, and with them the heart rate of the watching world.

You can be sure of this: the troops won’t all go home. A force will stay on the Ukrainian border so that Putin can raise or lower tensions whenever he needs— as well as use other means: reports are now coming in that Ukraine has suffered Cyber attack, almost certainly from Russia.

In this sense, Russia uses its presence similar to the way that Iran uses its nuclear programme: as a means of extracting concessions. So it threatens but it never fully acts — because to do so would mean to exchange leverage for punishment.

Putin has always been pretty rational, even cautious. It appears this is still the case. It may well be that after 20 years of acting like a Tsar, he has gone mad, like so many before him, and something crazy is coming. But for a moment it seems that this whole affair has been another big Russian victory. Putin has won this round — and we let him get away with it.