It was the summer of 1995. The Tory leadership struggle was in full swing, and after days of intense excitement Britain’s next Prime Minister — or so he hoped — was poised to emerge into the national spotlight.

The challenger was young, ambitious and burning with intensity. His credentials were impeccable. Brought up in a council house, of humble but aspirational stock, he was famously clever, with a doctorate from Oxford and an All Souls fellowship. He had become a Conservative councillor at the age of just 21; he had worked in the City; he had been Margaret Thatcher’s chief policy adviser. As a relative newcomer to the Cabinet, he was untainted by the disappointments of recent years. He had a rare clarity of ideological vision, a fiery sense of political direction. And while other potential assassins had ducked the Prime Minister’s challenge to face him in open combat, he had embraced it.

A man of courage, then, a warrior of truly puritanical fervour. Even the Sun had come out in his favour. This, surely, was his moment… Then out he came, flanked by his supporters. The cameras flashed, and everything went horribly wrong.

“Viewers were startled by the strange green-clad torso behind John Redwood as he spoke at his press conference yesterday,” began Matthew Parris’s sketch in the next day’s Times. “No head was visible in the frame. I can reveal that it belonged to Mrs [Teresa] Gorman. We would recognise that bust anywhere.”

It got worse. On Redwood’s other side stood the ferociously Right-wing MP Tony Marlow (“his mates call him ‘Von Marloff’”, noted Parris), dressed in a boating blazer so garish, so violent, it almost made Gorman’s lime-green jacket look tasteful. Another sketch-writer likened it to “a chair from the passenger deck of the Hindenburg”. That was being kind.

Further along the table lurked a gaggle of MPs who might have been hand-picked by Labour’s spin doctor Peter Mandelson to present the very worst, most outlandish, most off-putting image of the Tory Party. “From time to time,” wrote Parris, “this bizarre claque would interrupt their master’s flow with a raucous little chorus of ‘hya, hya’, ‘hearrr, hearr’ and ‘yeah! yeah!’ from Mrs Gorman. It sounded like The Goon Show, but which of us can choose his claque?” Was Parris being unfair? One of those MPs, after all, was the former Chancellor Norman Lamont — not, perhaps, one of the titans of 20th-century politics, but a serious player in his day. Redwood himself, whatever his political flaws, was no fool. And there’s no doubt that as a passionate Eurosceptic, dismayed by his party’s course under John Major, Redwood stood for something; indeed, his defenders might argue that although he lost the battle, he won the war eventually.

Even so, it’s hard to see that press conference in June 1995 as anything other than a complete disaster for the Conservative Party. One of Major’s allies remarked that the insurgents looked like “Ward 8 from Broadmoor”. They did. And by the time the whole business was over, Major having seen off the rebellion by a margin of more than two to one, millions of ordinary voters had made up their minds. The taint of Broadmoor — the stench of indiscipline, decay, extremism, self-indulgence and freakery — had infected the entire Tory brand. Perhaps the only surprising thing about the general election debacle two years later was that the Conservatives won any seats at all.

Have today’s Tories reached their Redwood moment? Maybe not. Maybe, when the winner is crowned in September, striding confidently into Downing Street to take control of the economy, the weather will change in their favour. It’s just possible, if you really try, to imagine a future in which Ukraine wins the war in the east, world commodity prices begin to fall, energy and food bills drop, the threat of Covid fades, the NHS backlogs ease and work begins on tens of thousands of voter-friendly new houses. Squint hard enough, and perhaps you can glimpse Liz Truss waving triumphantly to her activists in two years’ time — dressed, presumably, as Margaret Thatcher in the summer of 1987.

But even as I write this stuff down, I find it very hard to believe. It’s often said that politics is showbusiness for ugly people, but today’s Tory Party seems an awful lot closer to Barnum & Bailey than to the glamour of Hollywood. Do die-hard Conservatives, I wonder, have any idea how they appear to the general public? When Nadine Dorries attacks Rishi Sunak for wearing an expensive suit and the wrong shoes; when Sunak himself talks of incarcerating asylum seekers on floating hulks; when Truss puts on her pantomime Thatcher act — do none of these characters have any dignity or shame?

Perhaps the only sensible thing a serious Tory politician has said in the last couple of weeks came from the Cabinet Office minister Johnny Mercer. “Worth remembering,” he tweeted a few days ago, “that on current trajectory we are out of power in two years’ time. The puerile nature of this leadership contest is embarrassing. Time to raise the standards.” 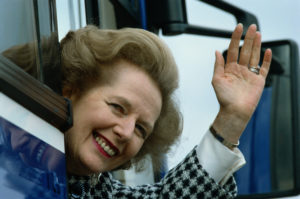 Does politics work that way, though? History suggests that when you’re spiralling into a clown show, it’s very hard — if not impossible — to raise the standards. No matter who wins the leadership election, at least a hundred Tory MPs will probably be deeply disappointed. And can you imagine the poison vanishing overnight? Can you really picture Jacob Rees-Mogg — adored by some activists, admittedly, but despised by many people not interested in politics, and positively loathed by anybody who bought his book — ever turning down an invitation to appear on Channel 4? Will Dorries ever stop talking? Will the own goals ever cease?

Why governing parties degenerate in this way is an intriguing question. It seems pretty obvious that all administrations eventually succumb to entropy. People grow old; they get tired; they make mistakes; they run out of ideas. Under the pressure of office, even the most dynamic tyro becomes exhausted. The diaries of Bernard Donoughue, who was Harold Wilson’s policy chief in the mid-Seventies, offer an object lesson in how a bright young thing soon turns into a dying star. “I have been round this course so often that I am too bored to face jumping any more hurdles,” Wilson tells his young adviser at one point. “The trouble with me now is that I only have the same old solutions for the same old problems.”

A few weeks later, working on a speech for the Durham Miners’ Gala, Wilson produces a draft that his aides find “stale, boastful, full of his old clichés, with whole paragraphs repeated from previous speeches”. His press chief, Joe Haines, points out that there’s nothing new in it. “I don’t have anything new to say, do I?” says Wilson wearily. “Well, you might put some of your old ideas in new words,” Haines snaps back. But he is, of course, wasting his time.

I would be delighted to be proved wrong, but today’s Conservatives strike me as a gigantic version of Harold Wilson circa 1975: tired, seedy, cynical, pointless, so bereft of ideas that they have been reduced to arguing about the cost of their own shoes. It speaks volumes, for example, that to get a sense of Liz Truss’s ideas, her critics had been forced to dig out Britannia Unchained, a volume she co-wrote in the dying days of the Brown premiership, full of policy prescriptions for a vanished era.

What’s even more revealing, though, is that Truss is currently leading the leadership race not as herself, but as an effigy of Margaret Thatcher. And if I, who managed to get more than 800 pages out of the first few years of the Thatcher premiership, find this utterly ridiculous, what on earth do normal people think? What sane person attends the most important job interview of their life dressed as somebody who won the same role almost half a century ago? Can you imagine Thatcher doing the same, dressing as, say, Stanley Baldwin or Winston Churchill when she stood against Edward Heath in 1975?

But entropy isn’t the only explanation for what has gone wrong. To look slightly further back, the Conservatives were in office for 13 years between 1951 and 1964, and by the end the game was clearly up. Even so, they weren’t a joke: Sir Alec Douglas-Home’s Cabinet included Rab Butler, Ted Heath, Reggie Maudling, Keith Joseph and Peter Carrington, all of whom were pretty serious people. Or take another example of a government kicked out after 13 years, the Labour administration of Gordon Brown. Sure, it was tired and divided. But there were plenty of canny people around the Cabinet table: Peter Mandelson, Alastair Darling, Jack Straw, Alan Johnson, Hilary Benn, Yvette Cooper, Andy Burnham. Maybe they weren’t the greatest ministers in the world, but they weren’t reduced to squabbling about the price of shoes. So here are two thoughts. The first, which some may find very objectionable, is that as parties become more responsive to their activists, the further they descend into self-indulgent idiocy. This is the Tories’ third leadership election in seven years, and as we all know, it’s the activists who decide the winner. But it’s easier to talk about ideas sensibly, to admit doubt and contradiction, to acknowledge the necessary compromises of office, when you’re not pandering to a hard-core mob. In that sense, the parallel may be with the Labour Party after 1979 — or, indeed, during the Corbyn fiasco — when demagogues like Tony Benn relentlessly whipped up party members against their own representatives. That’s exactly what Rees-Mogg and Dorries are up to now, abetted by fellow-travelling journalists at the Daily Telegraph. But if you want politicians who play to their activists, then you won’t get good politicians. Governing well is messy; good government means disappointment. And that of course, is the one thing activists don’t like to hear.

And here’s the second thought. It really is all the media’s fault, but not for the reason many people seem to think. The Tories aren’t in a mess because the media are biased against them, but because the media are biased against complexity and in favour of lunacy. On every channel — the BBC, Sky, GB News, the lot — producers look for loudmouths and ideologues, the kind of people who will generate “must-watch” social media clips. Even supposedly serious formats, such as the BBC’s Sunak-Truss leadership debate, have degenerated into embarrassing knockabouts.

If you doubt that things were different a generation ago, just watch a clip of the equivalent Cameron-Davis debate in 2005, in which the two contenders look like Pericles and Demosthenes by comparison with their modern-day successors. Or if you want to feel really wretched, go to YouTube and watch the BBC’s Panorama interview with Margaret Thatcher in 1977 or Thames’s This Week interview with her rival Jim Callaghan a year later. The contrast is painful to behold.

So here we are, trapped, perhaps forever, in Ward 8 at Broadmoor. Still, there is one consolation. It could be worse. The Conservative Party may be a clown show, but at least it’s not the Republican Party. Well, not yet, anyway.