We tend to characterise totalitarianism as a top-down affair, where the state controls the thoughts and actions of its citizenry according to the whims of some politburo. But in the West today, the project of information control and narrative management is not solely the brainchild of the state. Rather, calls to increase censorship come not from the state but from below, with the educated, urban middle classes often organising on their own to help bring this about.

Take the podcaster, Joe Rogan, whose viewership is an order of magnitude higher than primetime television and has repeatedly been the subject of controversy and attempts at censorship. If Joe Rogan had lived in North Korea or the Soviet Union, his problems would no doubt stem from the government and the lack of forbearance of people such as Kim Jong-un or Nikita Khrushchev.

In the democratic United States, however, Rogan’s problem is quite different: The Joe Rogan Show has been subject to open threats of strike action by the employees at Spotify, which distributes his podcast. Their principal demand is to be handed editorial oversight over the podcast, with the power to veto what Rogan says or does.

This campaign was bolstered by an open letter signed by 270 “experts” concerned by his “history of broadcasting misinformation, particularly regarding the Covid-19 pandemic”. Interestingly, the list of signatories was not populated by people actually working in virology or vaccine research. Many of those who signed were nurses or students, others were general practitioners, a few were dentists, and at least one was a licensed marriage and family therapist.

It’s a bizarre situation: a call to censorship justified by the incapability of non-experts to handle a subject like vaccine research is then inundated with people who by the same metric should themselves be disqualified from having an opinion. But, ultimately, that’s the point — this was not a list of 270 of experts in the field, but rather a list of 270 of people from the expert class.

These class dynamics are hardly very subtle. Take Greta Thunberg, whose claim to fame, to put it pithily, is the fact that she refuses to go to school. While many of us can probably empathise with this desire, there is something strange about a person who hasn’t even finished high school acting like she belongs to a group of people who justify their rule through technocratic language. But while Greta may not really have much of a formal education, she does have rich parents, and a slew of contacts in the international NGO world. It would be foolish to think that the mere act of having a PhD would allow you to countermand someone like Greta Thunberg, even though the echelon she occupies openly ridicules the vast hordes of “deplorables” for the high crime of only having a high school diploma.

Like medieval nobles claiming a right to rule based on being a superior breed, and then openly practising inbreeding, our current elites rarely live up to their own hype. Often, the experts are stupid and wrong, sometimes to an almost comical degree. And yet they persist in trying to convince us that they deserve to rule us, and get mightily upset whenever someone dares to challenge their power. Their fixation with Joe Rogan is not hard to understand through this lens.

The investor Warren Buffet famously said: “There’s class warfare, all right, but it’s my class, the rich class, that’s making war, and we’re winning.” Today we can describe the political sphere with a modified version of this: there’s class war, all right, but it’s the expert class making war, and it’s not at all clear that they’re actually winning. Of course, the state plays its role here, but it’s difficult to shake the impression that it lags behind the enthusiasm and radicalism of the expert class — the students, professors, journalists and people whose work consists of writing and answering emails.

Perhaps the recent news that Sweden is forming a ”Psychological Defence Agency” in order to “safeguard democratic society” and “the free formation of opinion” gives us a sense of where the West is heading. The Swedish situation is actually far more subtle — even contradictory — than it first appears. Myndigheten för Psykologiskt Försvar (MpF) didn’t really make much of a splash in Sweden when it was announced. It was, perhaps surprisingly to any foreign observers, not even lazily condemned as a step towards 1984 or a Brave New World.

By now, everyone in Sweden is quite used to new government agencies being launched left, right and centre. If it follows in the tracks of the new agency for gender equality, which quickly devolved into a dysfunctional mess boasting more employee turnover and workplace-related sickness than an infantry brigade in World War I, the MpF is likely to become a glorified jobs programme for academic graduates, with no clear mission and an utterly broken work environment, filled with backbiting and petty office politics. In Sweden, government agencies are where political movements go to die. 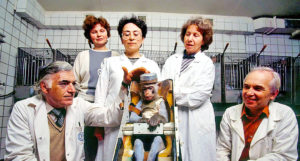 We can see this in the cultural revolution experienced by the country in the mid 2010s around the issue of migration. From 2015 to 2018, the entire Swedish expert class closed ranks, mobilised every single institution they controlled, and joined with the state in an attempt to combat “misinformation” and prevent wrongthink on the topic of immigration.

For almost a decade, the topic of immigration was transformed from one of actual material politics to one of  “competing narratives”. The idea that immigration had costs and drawbacks was reduced to a mere story, a narrative being sold by the Sweden Democrats. If the experts came together, and simply enforced the spread of a different story, anti-immigration populism could be defeated in detail.

This never came to pass, because unlike how things work in the minds of the expert class, reality isn’t just a “story”. If criminality is on the rise in your neighbourhood, and everyone knows that the criminals are newly arrived migrants, plucky attempts to fabricate rosy narratives will probably fall flat. But, as the saying goes, when all you have is a hammer, everything starts looking like a nail; for most members of our “expert class”, managing the “discourse” is exactly what they are trained to do.

These agonised contortions are on full display in the United States and elsewhere on a variety of topics, from the status of the 2020 election to Covid vaccines to trans issues. Just as in Sweden in 2015, our expert class is beleaguered, desperately looking for something to stem the tide of wrongthink and rebellion from the people below them. And just as Sweden saw an exploding “alternative media” scene as a response to attempts to control the media narrative, the American experts are battling the uncomfortable fact that Joe Rogan has far more viewers than any of the channels they control.

To illustrate just how difficult the situation is, consider the fact that something uncomfortably close to half of America currently thinks the 2020 election was not legitimate. This is a “narrative” of events that has been fought ferociously by every prestige institution in America, not to mention the state itself. And yet, all of that has failed to move the needle. Even the most frenzied attempts to control the narrative — such as the Swedish crime prevention agency engaging in a decade-long struggle to prevent anyone from researching whether certain crimes such as gang-rape displayed a similar skew along ethnic lines as in countries such as Germany — seemed to do nothing.

So while the Swedish announcement of an official state agency designed to carry on these sorts of battles might seem fairly dystopian at first blush, this is only even happening because these battles kept being lost. Again, to borrow from Warren Buffet: there’s class warfare going on, all right. But are the experts currently winning?

From my Scandinavian vantage point, it doesn’t look like victory is forthcoming. In Sweden, the activist veterans of our mostly failed cultural revolution against the ignorant deplorables are now rapidly being retired — the lucky ones shuffled off to various bureaucratic cubbyholes; the unlucky ones forced to get (horror of horrors!) real jobs.

But as with most things today, the situation is quite different abroad. In the United States, there are no peace talks forthcoming anytime soon. The desperate struggle between the expert class and those they purport to rule is likely to become even more feverish in the years ahead. For unlike the opinions and advice offered by today’s experts, which tend to be as dishonest and contradictory as any old Soviet decree, open class conflicts have a tendency to stick around.