Vladimir Putin’s invasion of Ukraine is a barbarity. It is also an act of futility. That is not how many in Washington see it, and even Republicans who have become sceptical of foreign intervention may be shocked into thinking that Putin can succeed. But the history of his nation, and ours, says otherwise.

Certain reflexes remain irresistible in Washington, not only among politicians but in the media, too. One of these is a tendency to see every conflict as a new Second World War. Another is to believe that sufficient force and “resolve” can achieve any objective, whether that is our objectives in Iraq or Afghanistan or Vladimir Putin’s objectives in Ukraine. And a third is the habit of regarding those who fail to fall in line during times of crisis as traitors, appeasers, or the useful idiots of America’s enemies.

These reflexes have been on full display with the crisis in Ukraine. “This is Sudetenland,” House Speaker Nancy Pelosi said of Russia’s attempt to justify its war as a defence of separatist “republics” in Luhansk and Donetsk. It is a grave act of aggression, certainly; but great power irredentism has other precedents besides those of Nazi Germany.

Automatically comparing every crisis with the Second World War is a dangerous habit. It’s a reflex that helped stampede the United States into a needless war in the Middle East 20 years ago. Iraq was an “Islamo-fascist” dictatorship with “weapons of mass destruction”, a threat on par with a nuclear Nazi Germany. Most of America’s policy and media elite bought into the idiotic idea, with disastrous consequences — most of all for the people of Iraq.

Putin’s Russia is a much more serious threat than Saddam’s Iraq. But it’s a new menace, not another Nazi Germany. So President Biden deserves credit for refraining from hyperbole in his remarks this week. He rightly noted — with Cold War lessons and perhaps with America’s own rueful experience in Afghanistan in mind — that “history has shown time and again how swift gains and territory eventually give way to grinding occupations, acts of mass civil disobedience, and strategic dead ends”. The Ukraine crisis started with Suez

Biden was then asked whether Putin’s ambitions extended beyond Ukraine, and whether nuclear war was a possibility. Would Putin attack Nato countries — and was the United States ready to fight? While Biden’s answers were measured, the questions show the apocalyptic mindset that the Washington media easily slips into. It’s a mentality that many an ideologue or vested interest is ready to exploit — for arms sales, energy deals, or domestic political advantage. The latter can be seen in the way that liberals and NeverTrump pundits have used the crisis as an opportunity to question the patriotism of conservatives.

“Dear media: Ask Republicans why they are normalizing support for Putin,” the Washington Post’s Jennifer Rubin implored. Lawrence Tribe of Harvard Law School went considerably further, suggesting that certain conservatives and Fox News pundits urging the US to get more deeply involved in the Ukraine-Russia conflict might be guilty of treason.

“Led by Fox News Channel’s Tucker Carlson, the GOP’s Trump wing appears to be throwing its weight behind Putin. If Putin opts to wage war on our ally, Ukraine, such ‘aid and comfort’ to an ‘enemy’ would appear to become ‘treason’ as defined by Article IIl of the U.S. Constitution,” Tribe wrote in a since-deleted tweet.

Please be advised that any questioning of US policy or. the prevailing US narrative during this sensitive time constitutes the crime of treason, according to Harvard Law Professor @tribelaw. Treason is punishable by death, so it's probably best to tread *very* carefully. pic.twitter.com/VZHuAqFIlr

An editorial in the Kansas City Star likewise claimed that Missouri Sen. Josh Hawley “has clearly provided aid and comfort to Putin and hard-liners in Russia”. As the article acknowledged, Hawley has stated that “America has an interest in Ukraine’s independence and territorial integrity. And we have a strong interest in deterring Russian adventurism.” But because Hawley does not believe Ukraine should be part of NATO or that America should “fight Russia over Ukraine’s future”, he is morally libelled in the language of treason.

In the run-up to the invasion of Iraq in 2003, those who doubted the wisdom of George W. Bush’s war were subjected to similar obloquy. Then as now, conservatives counseling restraint were denounced as less than truly American. Today Tucker Carlson is the enemy of all right-thinking votaries of liberal democracy. Twenty years ago conservative columnists like Pat Buchanan and Robert Novak were the enemy, branded by David Frum as “unpatriotic conservatives” in the pages of National Review on the eve of the Iraq conflict. This narrowing of American political discourse did not wind up doing the Iraqis or Afghans any favors two decades ago, and it is not doing the Ukrainians any favours today. Now, as then, there is a need for something other than Washington’s reflexive apocalypticism. Realism, cool-headedness, and scepticism are more important than ever in a time of emergency. This is not the moment for Republicans, in particular, to discard the hard-won wisdom of the last two decades, purchased at great price after the follies of Iraq and Afghanistan.

Far from being unpatriotic, many on the right who insists on clear limits to America’s commitments to Ukraine (and to Nato) are in the best tradition of their party’s foreign policy — and America’s too. Republican realism was in fact the most successful of America’s Cold War strategic philosophies, and it merits a revival in the face of Putin’s challenge.

During the Cold War, Republicans and Democrats alike understood that America could not solve every crisis. When the Soviet Union invaded Hungary in 1956, and again when the Soviets used Warsaw Pact forces against Czechoslovakia in 1968, American leaders acknowledged there was little they could do. That did not mean the West was weak, and it certainly did not bespeak a moral indifference to the suffering of the Czechs, Slovaks, and Hungarians. The West simply knew that it was not all-powerful, and it had a strategy to follow regardless of whatever new abuses the Soviets perpetrated.

And even worse crimes than those of the Soviets did not prevent Republicans from engaging in necessary and successful diplomacy, as when Richard Nixon aligned the United States with the People’s Republic of China in order to drive a wedge between the world’s two major Communist powers. In the Eighties, Ronald Reagan was willing to work with Mikhail Gorbachev (a far less bloody tyrant than Mao Zedong) to bring the Cold War to a peaceful close, even as some neoconservatives excoriated him for negotiating with what the President himself had dubbed the “evil empire”. 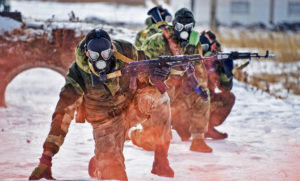 Even George H.W. Bush, who was not averse to foreign adventurism, was guided by sober realism in his actions toward the Soviet Union in its final months. In August 1991, Bush warned Ukrainians to proceed cautiously in contemplating independence from the Soviet Union. Writing in the New York Times, the neoconservative and former Nixon speechwriter William Safire damned Bush for his “Chicken Kiev” speech.

But for once, Bush was right: his words did not dissuade the Ukrainians from declaring their independence from Moscow. But they did minimise the risk that the United States would be perceived as engineering the USSR’s dissolution. A speech that would have pleased Safire would have jeopardised Ukraine, and the entire process of the Soviet Union’s mostly non-violent decomposition.

With China looming as the century’s greatest challenge, Americans must be wiser than they have been in the past two decades. Just as we discovered our limitations in the projects we attempted in Iraq and Afghanistan, we have good reason to believe that Vladimir Putin will meet a defeat of his own making in Ukraine. Russia is much more than Putin — it is a great power that will never disappear from the earth, and one that may never be altogether benign toward its neighbours. The Ukrainians deserve the freedom that they claimed for themselves in 1991, and the West’s horror at Putin’s aggression is righteous.

Yet we must be not only good, but wise, if we want to help the Ukrainians and ensure that Russia does not become a greater and deadlier North Korea. Only realism, and confidence in the enduring power of nations, will lead us to make better decisions than those our leaders have made since the Cold War ended.