Last year, the Canadian musician Tamara Lindeman, who performs as the Weather Station, explained to Uncut that her new album Ignorance was influenced by pop, but not just any old pop: “Eighties pop music, which was, I think, the best pop music.”

You know what she means. The pop records made between 1980, the birth of synth-pop, and 1987, when hip hop and house began to reconfigure the sound of the Top 40, have a lasting glow. At wedding discos, they unite revellers who grew up on them with kids born decades later. Advertisers also use them as generational glue: McDonald’s recently went for Tiffany’s I Think We’re Alone Now while John Lewis staked their Christmas campaign on a breathy cover of Together in Electric Dreams by Phil Oakey and Giorgio Moroder.

It’s not just that old hits are doing gangbuster numbers on Spotify. When artists such as Taylor Swift, Angel Olsen, Laura Mvula and Mitski want to pivot to pure pop, they turn to Eighties signifiers. You can hear it, too, in the glittery ebullience of Dua Lipa and Jessie Ware. There are even meticulous Eighties fetishists who create multiverse remixes of recent hits: Initial Talk made Lipa’s New Rules sound like Tiffany and Dead or Alive, while Louis La Roche turned Adele’s Easy on Me into the Madonna ballad that never was.

Top of the pile right now is The Weeknd, whose latest album Dawn FM is framed as an oldies radio station playing in purgatory. It’s the dream hybrid of new wave, electro and Thriller-funk that the Canadian has been working towards for a few years now: his neon-bright 2019 single Blinding Lights is the biggest Billboard single of all time. Among Dawn FM’s blatant homages to the mega-pop era are a monologue by Quincy Jones, a song named after Bret Easton Ellis’s novel Less Than Zero, and a very peculiar English accent. The Weeknd has long aspired to be the kind of pop colossus who bestrode the Eighties, so why not explicitly sound like one?

What’s significant here is not that the Eighties are back, but that they have been back for so long that these influences have seeped into the bedrock of popular music. The self-conscious Eighties revivalism of the electroclash scene is now 20 years’ old, as distant from us as it was from the heyday of The Human League. In 2016, Vulture had enough material to produce a solid list of “the 50 best modern songs that sound like the Eighties”, including Bon Iver, Chvrches, Mark Ronson and Haim. An ongoing Spotify playlist called “Modern indie songs that sound like 80s music” is currently 44 hours long. Guilty pleasures are now simply pleasures. Music that was once regarded as shallow and impermanent has proven itself eternal.

How we destroyed The Matrix

Pop is the trickiest genre to pin down. In theory, it simply describes music that is popular but in reality it is defined by the absence of obvious genre identifiers: if it’s not squarely rock, country, hip hop, R&B, then it’s pop. What happened in the Eighties was a paradoxical combination of diversity and consensus, with disparate artists coming together under the friendly, giant umbrella of pop. “The Eighties were a great decade for pop in America,” writes Kelefa Sanneh in Major Labels: A History of Popular Music in Seven Genres, “because musicians from different genres — R&B, various strains of rock’n’roll, the dance music underground — were all experimenting with electronic production, and converging upon similar styles.” When I asked my 15-year-old daughter what she liked about Eighties pop, she said that it sounded “united”.

The Eighties pop hegemony followed a deeply fractious period when the rockers hated the disco fans and the punks disdained both. The great unifier was the fast-evolving synthesizer. While the stigma suddenly attached to disco forced Prince, Michael Jackson and Nile Rodgers to invent new forms of dance music, members of the punk generation who preferred Kraftwerk to the Sex Pistols hatched synth-pop and the New Romantic movement, driven by a refreshingly impertinent hunger for mainstream success. In 1981, the pop polemicist Paul Morley celebrated a move “away from rock, grey independence, submission, austerity” towards “pop, disco, colour, lights, action”.

The New Pop Jacobins derided rock’n’roll as stuffy and earnest but songs such as Bruce Springsteen’s Dancing in the Dark and Van Halen’s Jump used brash synth fanfares to revitalising effect. Sonically curious art stars of the Seventies, including David Bowie, Peter Gabriel and Kate Bush, became mainstream phenomena by way of Fairlight synthesizers and gated drums. To be big, bright and, most of all, new was a common cause. “The world’s Top 40 is like an audio shot in the arm for everybody,” said Van Halen’s Dave Lee Roth. “We’re all different and we’re all being consumed by the radio for no other reason than we’re all 128 beats a minute and damn good looking.”

As Michaelangelo Matos describes in Can’t Slow Down: How 1984 Become Pop’s Blockbuster Year, this was the triumph of consensus pop; the zenith of music as a monoculture. Technology helped. The Sony Walkman made pop music portable while MTV made it visible. In I Want My MTV, Rob Tannenbaum calls the new network “the sun around which pop culture rotated” — an ultra-modern star-making machine which rewarded those artists who fully embraced pop’s potential for sensory overload and outrageous spectacle. Music videos often conspired with movies, as Hollywood producers sought synergistic hits. Can you think of The Breakfast Club without hearing Simple Minds’ air-punching Don’t You (Forget About Me) or Top Gun minus the slo-mo throb of Berlin’s Take My Breath Away? (The title of the Weeknd’s Take My Breath can’t be a coincidence.) 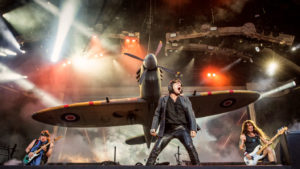 Consensus didn’t mean homogeneity. In terms of race, gender, age and sexuality (not that most gay artists were out yet), pop was remarkably diverse. The top of the Billboard Hot 100 had room for a mysterious polymorphous genius, a balding prog-rock drummer, a cross-dressing reggae fan from Kent, New York punk pioneers and a dancer from Detroit. Pop was even more transatlantic than it had been during Beatlemania: one week in 1983, almost half of the Billboard Top 40 was British.

The critic Lester Bangs once wrote that “we will never again agree on anything as we agreed on Elvis”, but then he didn’t live to see 1984, when just five albums, the fewest ever, topped the Billboard 200: Thriller, Prince’s Purple Rain, Springsteen’s Born in the USA, the Footloose soundtrack and Sports by Huey Lewis and the News. Three of the UK’s 10 bestselling singles of all time — Last Christmas, Do They Know It’s Christmas and Relax — came out that year. Nor did these represent competing constituencies: it was not unusual for a single record-buyer to own all of the above.

Critics such as Bob Stanley and Simon Reynolds like to draw a line at Live Aid in the summer of 1985, separating the playfully subversive drive of New Pop from studio-drunk MOR decadence, the career of The Eurythmics being the perfect case study. I don’t think it’s quite that neat (Exhibit A: the Pet Shop Boys) but very quickly the ambition and hi-tech sheen of Eighties pop came to be regarded as overblown, avaricious and rootless. Genre distinctions reasserted themselves. The consensus shattered. Authenticity made a comeback. Even Madonna sounded serious.

During the Noughties, the quintessential products of the Nineties inspired hungover nausea. In Paul Thomas Anderson’s Boogie Nights (1997), the Eighties is when everything goes garishly awry: too much money, too much cocaine. When artists such as Beck and producer Stuart Price foregrounded Eighties’ influences in 1999, many critics assumed it was some kind of ironic prank. Soon, though, the virtues of Eighties pop were being seriously reassessed. Pet Shop Boy Neil Tennant praised electroclash because “it’s not trying to be normal. In the Eighties, pop was aspirational. Then it got taken over by being one of the lads: rave, football, Britpop. It stopped being aspirational and it celebrated ordinariness.” Steadily, the Eighties was reborn as the apogee of pop as larger-than-life escapism. Its hugeness — sonically, melodically, emotionally, commercially — was no longer embarrassing but admirable.

Over time, younger artists emerged for whom the Eighties were an idea rather than a memory. In 2002, LCD Soundsystem mocked “borrowed nostalgia for the unremembered Eighties” but for someone like The Weeknd, born seven weeks after the decade ended, this absence of first-hand experience is what allows for a potent simulation of the era, as distilled and romanticised as it is in Stranger Things. The Velvet Underground had to die

In this dream of the Eighties, half-real, half-fantasy, there is Prince but no Huey Lewis; Depeche Mode but no Howard Jones; the vibe of a John Hughes movie rather than the songs that actually appeared in John Hughes movies; and an unreasonable amount of neon. A record like Blinding Lights, M83’s Midnight City or The 1975’s A Change of Heart is not a sonic reenactment of the Eighties but a fresh riff on our collective (mis)understanding of the Eighties.

Why does Eighties pop have such inexhaustible talismanic power? Partly because it is thrillingly colourful, glamorous and dynamic next to the jaded minimalism of much post-hip hop pop music. Partly because it recalls a time when futurism still outweighed nostalgia and fame still looked like fun. It also represents a period when hits could have universal appeal without being bland and a song could be both gauche and glorious.

But there is another, more underrated factor. When Tamara Lindeman was asked why she loved Eighties pop, she didn’t cite production values or style. “It’s the music that’s about longing and desire and despair and unrequited love,” she said. The mood of an archetypal hit — Together in Electric Dreams, A-Ha’s Take on Me, Madonna’s Borderline — is urgent exuberance with a streak of melancholy and yearning. A common narrative, in both the lyrics and the videos, is transformation and escape from the mundane. As Prince’s 1999 or Alphaville’s Forever Young make explicit, the fear of imminent nuclear annihilation played a part in this compulsion to live fast and large.

Knowing that so much of Eighties pop’s energy came from a passion for the right-now and the what-next, I want to avoid the irony of simple nostalgia and a fusty dismissal of what is happening in pop today. But when someone as commercially dominant as The Weeknd is using the Eighties imaginary as a winning template, then and now can’t be so far apart. He is plugging into the closest that pop music has ever come to attaining its utopian ideal of being everything to everybody.