Reflecting on his life amid the rising discords of a turbulent era in his poem “All Souls’ Night: An Epilogue” (1920), William Butler Yeats wrote:

I need some mind that, if the cannon sound
From every quarter of the world, can stay
Wound in mind’s pondering,
As mummies in the mummy-cloth are wound;

He had his own reasons for evoking a spirit of that kind. Even so, it remains good advice today, when comparable discords press toward what promises to be an equally explosive resolution. As 2022 stumbles blindly to its close, the clarity of mind Yeats sought is a condition worth cultivating. Listen past the barnyard gabble of the mass media and the porcine gruntings of politicians rooting at the public trough, and you might just hear the events of the last year sounding the notes of an ancient melody.

Books published in the midst of today’s clatter lack the distance from current contentions to make that melody audible. This is why the book that comes first to mind as I reflect on 2022 is Yeats’s longest and strangest prose work, A Vision. There are several good editions of this work available; those that take the second (1937) edition as the basis for their text are best, since Yeats revised the work substantially after the first edition of 1925.

It used to be fashionable to ignore the massive role that occultism played in Yeats’s life and poetry. Like many other creative minds of his era — D.H. Lawrence and Hilda Doolittle among them — Yeats found in the teachings of occultism a potent source of inspiration. He and his wife Georgie were both members of the Hermetic Order of the Golden Dawn, the most influential occult organisation of their time, and both achieved the rank of Adeptus Exemptus, the highest level of initiation the order offered. Georgie Yeats herself was responsible for the core ideas and imagery in A Vision. Working out the details of the system and putting it in vivid prose was her husband’s task.

A connection between occultism and the creative arts may seem improbable to those who lack exposure to the occult traditions of the Western world. To those not so hindered, it is obvious. Occult training teaches the ability to recognise in the seemingly prosaic events of daily life the presence of myth and symbol. The chattering classes of Yeats’s time thought of progress, as ours think of it today, as a simple objective reality out there in the world. Occultists like the Yeatses recognised (and their equivalents today still recognise) progress as a deeply ambivalent mythic narrative that may or may not have anything to do with the facts on the ground.

A Vision is, among other things, an antidote to the mindless acceptance of that myth. Like the hexagrams of the I Ching or the cards of the tarot, it presents a sequence of archetypal patterns as a model for the events of human life. Yeats’s sequence comprises 28 stages modeled on the symbolic 28 days of the lunar cycle, from new moon to full moon and back to new. Each stage is defined by the two fundamental relationships of the human spirit; that between the will and the object of its desire, on the one hand, and that between the mind and the objects of its understanding, on the other. The first two are Will and Mask in Yeats’s terminology, the latter two Creative Mind and Body of Fate. These paired faculties move in complementary cycles around the wheel of the 28 phases, giving each phase its distinctive character.

Each human life completes the cycle of the phases between birth and death. Each human soul completes the same cycle on a broader timescale as it passes from life to life — the Yeatses, like occultists generally, accepted reincarnation as a matter of plain fact as well as a source of mythic symbols. Each political, cultural, literary, or artistic movement follows the same course, and so does each civilisation as it rises and falls.

Always there are the first inchoate fumblings, drawing toward coherence as the person, the soul, the movement, or the civilisation passes through childhood and approaches its coming of age. Always there is the struggle to achieve unity of being around some half-understood theme. Always, once the full moon is past, the struggle to bring the theme into manifestation descends into pantomime, going through the motions replaces meaningful effort, and words that once set minds and hearts aflame turn into meaningless catchphrases. The inner life trickles away into empty form, and the outworn form dissolves into a void from which some new phenomenon of opposite tendency will emerge. 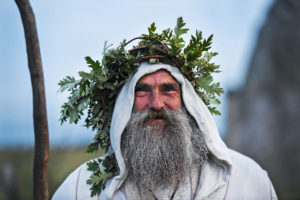 All this doubtless sounds very abstract. In Yeats’s hands, it is anything but. The book begins with an introduction, “A Packet for Ezra Pound”, a lively prose poem that weaves together the surroundings of Yeats’s last years with an account of the book’s conception and writing. There follows “Stories of Michael Robartes and His Friends”, which presents the entire structure of ideas in the form of a lively fiction with comic elements. (It really is a pity that Yeats never did anything else with comic prose; he was very good at it.) In the chapters that follow he outlines the structure of ideas underlying the 28 phases, and then proceeds through the phases one at a time, using as examples biographies well known in his time.

From there, another philosophical chapter puts the phases in context. Afterwards comes a chapter on the soul’s journey from death to rebirth, and then the two chapters that speak most precisely and unforgivingly to our condition in the waning days of 2022: “The Great Year of the Ancients” and “Dove or Swan”. Here he sets out the way of looking at historical change implicit in A Vision in uncompromising terms.

Today’s popular thought likes to imagine history as a straight line, either ascending from the primitive squalor of the past to some Hollywood destiny or other out there among the stars, or descending from a vanished Golden Age toward some equally cinematic doom that is always about to arrive but never quite manages the feat. Now and again someone suggests instead that history moves in cycles, and is promptly shouted down by all right-thinking people. Yeats also recognised the cyclical nature of history, but saw it as a process that moves one way and then the opposite way, driven back and forth by contending forces.

As Yeats knew well, the Greek philosopher Empedocles got there more than two millennia ahead of him, and William Blake put the same vision into his Mental Traveller and his prophetic books. Yet the insight still has power to shock. “What if Christ and Oedipus or, to shift the names, Saint Catherine of Siena and Michelangelo, are the two scales of a balance, the two butt-ends of a seesaw?” Yeats wrote. “What if every two thousand and odd years something happens in the world to make one sacred, the other secular; one wise, the other foolish; one fair, the other foul; one divine, the other devilish?” Yeats remembered that Sophocles’ Oedipus Rex was written and performed for one of the most sacred religious festivals of the Athenian year, received in much the same spirit that European audiences a century ago directed toward the Passion Play at Oberammergau. He knew just how great a reversal of religious feeling took place when Christianity and Islam in the western half of Eurasia and Buddhism in the eastern half supplanted the faiths of the two millennia preceding them. A reversal of a similar kind awaits every movement in human society, politics, and the arts, just as it awaits our civilisation in due time. The supposedly straight line of history does not just bend, it curves around and heads in the other direction.

That way of thinking allowed Yeats moments of startling prescience. He wrote, “What discords will drive Europe into that artificial unity — only dry or drying sticks can be tied into a bundle — which is the decadence of every civilisation?” Those discords are a matter of history now, and the bundle will join them in due time. More generally, the blank incomprehension shown by today’s privileged classes as they face a world that refuses to behave according to plan comes as no surprise to readers of A Vision. Those baffled looks show up reliably in the very late phases of a civilisation, as the last sliver of moonlight gives way to a fertile darkness where something new and very different will be born.

Our position in the wheel of the phases was no mystery to Yeats, for that matter. He identified 1927 as the beginning of the 26th phase, and sketched out briefly what lay ahead. The dissolution of our collective discourse into furious bellowing of empty slogans is as typical of the last phases of the cycle as it is familiar to us today. Yet the great difficulty readers will have in approaching A Vision is precisely that it flies in the face of all our modern assumptions about history and change. Yeats was under no illusions here:

Because I have a marvellous thing to say,
A certain marvelous thing
None but the living mock,
Though not for sober ear;
It may be all that hear
Should laugh and weep an hour upon the clock.