“For many farmers it’s the end of their business and they will fight until the last. Sometimes these farms go back generations, they were built by hand, and people feel farmers heart and soul. This is all being taken away.”

Jan Brok, vice chairman of the BoerBurgerBeweging (BBB) party, understands why Netherlands farmers have spent the past month blockading food distribution centres, roads and ministers’ driveways. They are horrified by a new environmental policy that will mean a likely 30% reduction in livestock.

The Netherlands is a country of four million cattle, 13 million pigs, 104 million chickens, and just over 17 million people. It is Europe’s biggest meat exporter with a total area of just over 41,000 square kilometres, and a fifth of this is water. It is one of the world’s most densely populated countries, with the EU’s highest density of livestock.

But there is a significant cost to this abundance: the local environmental impact. Such intensive agriculture, and livestock farming in particular, creates harmful pollution. Manure and urine mix to produce ammonia, and together with run-off from nitrogen-rich fertiliser on fields ends up in lakes and streams, where it can promote excessive algae that smothers other life. Manure here is not a vital fertiliser but a problem waste product.

For decades, this success in trade and agriculture has been accompanied by high emissions of harmful nitrogen compounds, including nitrogen oxides emitted by industry and transport. Levels were dropping, and in 2015, the Dutch introduced a ‘trading scheme’ known as the Programmatische Aanpak Stikstof (PAS) to try to reduce the pollution.

But a Council of State court ruling in 2019 — on a case brought by two local environmental organisations against various farms — ruled that this offsetting scheme was invalid. Permission could not be granted for polluting projects or farm expansion in exchange for promised nitrogen-related reductions in the future: the reductions needed to come first.

The government panicked: national shutdowns were put in place, building projects were put on hold and traffic speeds reduced to 100 kph in the daytime on major roads; it was also obvious that farming was a problem — something needed to be done about all ammonia, nitrogen oxide and nitrous oxide emissions.

Then, in January, the conservative-liberal-Christian coalition pledged to halve nitrogen production by 2030, with a €25 billion budget to back it up. That money was the loud part. The quiet part included the possibility of expropriation, of the government forcibly purchasing farmland. Plans drawn up by civil servants include slashing livestock numbers by 30%. More than €500 million is being brought forward for regional government to buy out farmers this year and next.

Leading the charge among the coalition partners are the Democrats 66 (D66) party. They insisted on “real action for the climate” in their last manifesto. Tjeerd de Groot, the D66 nature and farming spokesman, pointed out that the Netherlands is Europe’s biggest nitrogen emitter, followed by Belgium and Germany. He told a current affairs programme last week: “It is absolutely essential — but also painful — that the plans go through.” In June, the government published two documents. One: a map showing the areas that need to reduce emissions by between 12% and 95%. The second was a statement that aimed to help farmers — which De Groot admits failed spectacularly. Farmers saw ruin, not a pair of documents. They looked at the percentage reduction figures next to their farms, and began interpreting how many cattle they would need to cull. It was an enormous blow. Many of them had made huge, expensive investments in new equipment to reduce the environmental impact of their herds.

Hence the massive uprising. A huge rally in the central village of Stroe was followed by wildcat protests; ministers were challenged at their homes; police vehicles were attacked; roads and food deliveries were blocked. Supermarkets lost “tens of millions” according to food retailers group CBL. In one incident, a police officer shot at a 16-year-old farmer’s son, apparently misreading his intent to leave a rally. Last weekend, farmers replaced road signs, declaring a free state of boerenlanden (farmer land) in some villages.

“The [farming] sector is dumbfounded,” says Brok. His party has seen a huge increase in the polls and been signing up 300 members a day. “It has been pushed into a corner by a [Mark] Rutte government that has lost public support in all kinds of ways. Everything that is happening is about frustration, legal battles, people digging in their heels, it’s anger.” Wytse Sonnema, a spokesman for the farmers’ association the LTO says that their own grassroots proposals that would lead to a 40% reduction by 2030, had been completely ignored. “Famers in the Netherlands are deeply concerned and angry about nitrogen policy that was presented by the national government on June 10th”, he explains. He was angered by the map showing entire regions facing 70% reduction targets. “According to the government these should all add up to a country-level reduction of 50% in 2030, which is simply unfeasible, and will have disastrous effects on not just agriculture, but on the economic, social and cultural viability of rural Netherlands.”

While some see the farmers as denying a reality that has been approaching for the past 30 years, their protests have drawn on wider mistrust in politics. (The uprising comes after the previous government stepped down last year, after a childcare benefits scandal involving ethnic profiling by the tax office  — they eventually returned to power and formed exactly the same coalition.) Across the country, people have been hanging Dutch flags upside down along roads and bridges in an expression of support for the farmers.

Jeroen van Maanen, an organic farmer with 130 cows, who helped organise the Stroe protest, said nitrogen has become more than a gas. It has overtaken every other agricultural problem. European law demands that farmers protect vulnerable natural areas, by improving ground water quality and soil quality, and through careful land management. “If you block all other solutions, there’s only one left: a reduction in farmed animals”, he says. “That’s their primary goal and they are using nitrogen as a reason to achieve it.

“Everyone in the world is born an omnivore, whether we like it or not. It’s a populist agenda… that’s purely about less livestock, fewer animals, more vegetable alternatives. I think it’s crazy. Plant-based food needs fertiliser, and where do you get it if you don’t have manure?” 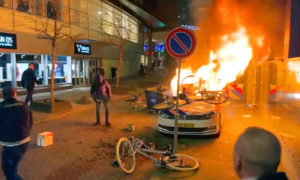 One group of organic farmers has proposed its own 10-point plan for change, which has so far been ignored by government. There are also indications that some young farmers are open to downscaling — but as vulnerable freelance businesses, they need the cash and security to do it. Who is going to pay more, or take less profit along the supply chain, to make this happen? “I speak to many farmers who want to change: the question is how”, says Natasja Oerlemans, head of the food team at WWF Netherlands, stressing that they are not farmer bashing. “The how is not very clear in current government communication but I think there are multiple opportunities for farmers to transition.

“The fact that our food system in the Netherlands is broken is not new. The current situation is detrimental for biodiversity but also for farmers — many don’t have a successor, every day five farmers stop, and about half of their income is dependent on European income support subsidies.

“Our farmers still think we are feeding the world. But the whole process of intensification and scale enlargement has made farmers  very low income, producing for a bulk market, exporting 70%, but with limited volume compared to Ukraine or the US. It’s not working for them, for the environment and for us as people, our air quality or water quality.”

Johan Remkes is the latest negotiator appointed by the government to diffuse the crisis. Remkes was an curious choice. He came to the position already an object of suspicion among farmers, because he chaired a commission on nitrogen that recommended drastic cuts. The anger and protests are likely to continue. Last week, a provincial government meeting was evacuated and 150 people sheltered in a cellar after a bomb threat. Police and politicians talk about a “hardening” of protest, threats and intimidation, while farmers talk about being both singled-out and ignored. The world is beginning to take notice. Internationally, the farm protests have been cheered on by alternative Right-wing media, desperate to fit them into a larger story. On one side the localist farmers with their traditional occupations. On the other, the globalist ‘world elite’, pushing a green agenda developed by the World Economic forum in Davos.

Yet this is a deeply parochial issue. The wider resonances detected in some English-language reporting of the protests generally miss the point. Although legal rulings from cases brought by green activists have driven the agenda, a broad spectrum of political parties agrees change is needed in industry, transport and building to combat climate change. It’s not Klaus Schwab driving farmers to black roads — it’s a run-of-the-mill collection of Dutch politicians and activists. And it’s not just farmers who are getting edgy. Corporations are also starting to fume, or even move abroad, with the prospect of unclear future greening costs, and the pain of manoeuvring through the elephantine Dutch bureaucracy.

So a local issue — for now. A stone’s throw away in Belgium, Flanders is beginning to limit nitrogen emissions and ordering tens of farmers to stop their work. Like the air and water that flows over borders, environmental issues, and clumsy attempts to solve them, will come for us all.