Good Friday coincided with Passover this year. We didn’t have a proper Seder service because we had just moved house and everything we needed was hidden in unpacked boxes. But at least we had all our possessions with us. For many — from those escaping the Egyptians centuries ago to those escaping war or oppression in Syria or Ukraine today — that’s not an option. They leave home with only what they can carry.

Instead of Seder, I read an illustrated version of Exodus to my boys. We talked about people wandering for years in the desert, looking for a safe home. It is the central, guiding narrative of the Hebrew scriptures. Israel is home, a land flowing with milk and honey. Moses himself doesn’t make it there. Having led his people for years, he climbs Mount Nebo to see what God has promised his people, then dies. Martin Luther King riffed off Moses many centuries later: “I have been to the mountain top and I have seen the Promised Land.” King also died the next day. The person who says religion and politics don’t mix has never read the Bible. Or has only understood it through the lens of a very denuded individualistic Christian piety.

Not only is the Bible one of the most influential works of political philosophy ever written, it is largely seen through the lens of the refugee. The 40 days of Lent, for example, are an echo of those 40 years the Israelites spent wandering in the desert, homeless. Jesus is forced to become a refugee after his birth, first fleeing to, then symbolically returning from Egypt. That’s why I think Justin Welby, along with various other senior Bishops, was quite right to draw upon the scriptures to say what they think about the Government’s new refugee policy: “Sub-contracting out our responsibilities, even to a country that seeks to do well like Rwanda, is the opposite of the nature of God who himself took responsibility for our failures on the cross.” Why treat Rwanda as a dumping ground for problems we do not have the political nous to sort out ourselves? Let’s leave Rwanda out of it.

The British colonial office did the something similar back in 1903; they offered Jewish refugees fleeing Russian pogroms 15,500 acres of modern-day Kenya as a place of settlement. This, too, was eventually, and angrily, rejected, despite being intended as only a temporary stop-gap. It felt like a similarly cheap fix. The extreme vulnerability of collective homelessness is not something to be exploited to soothe domestic nervousness — though, as the generous response of the British people to the Ukrainian crisis today has revealed, the nervousness may not be as keenly felt as politicans sometimes assume. Atheists have an evil problem

That, at least, is my view. I understand that others may take a different line, even Christians. And I do think that those who criticise the Rwandan plan – though that may be too grand a word – have a responsibility to propose other solutions to the refugee crisis; those attacking the CofE for easy moralising do have a point. But what is just plain daft is the idea that Christianity should stay out of politics. “I think we separated the Church from the state a long time ago,” said Conservative MP Ben Bradly. Really? When was that? For a Conservative MP to have so poor an understanding of the British constitution is both laughable and depressing.

Yet again and again, when Bishops make a point others regard as “political”, the press leap on it as easy content, ripe for debate. But there really isn’t an argument here, except between people who know something about Christianity and those who don’t. Must we rip out “blessed are the poor” from our Bibles, or the idea that all of creation is from the Lord? Sure some wiseacre might shoot back that old favourite “Render unto Caesar the things that are Caesar’s and to God the things that are God’s”, in an attempt to demonstrate that the two should be discrete – but this is not an admission that there is a realm of human activity in which God shows no interest. A religion that begins with God’s creation of the universe is hardly going to carve out some unique territory where God has relinquished his authority. No, this clever phrase from Matthew’s Gospel is Jesus responding to those who would trip him up, who would get him in trouble with the state, by subtly pointing out that, to a good Jew, all things come from God, and so the set of things that are God’s contains everything. Render unto Caesar is a kind of linguistic joke. That set of things which are Caesar’s and not God’s is an empty set. 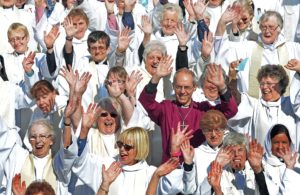 The Church’s war on the clergy

Protestantism, however, with its emphasis on interiority, the religion of the heart, made a disastrous retreat into the first person singular. This allowed secularism to claim that religion is a private matter, something to be practised outside the public square, a bit like sex. Do what you like in private, but don’t “ram it down my throat”. But as sexuality is now something we are all encouraged to express outwardly, secularists want to force religion into the closet. Keep your God to yourself.

Part of the problem is that politics has narrowed into little more than a boo-hurrah between Left and Right. Christianity certainly doesn’t want to get sucked into that game, not because it should stay out of politics, but precisely because politics is a far bigger business than that practised by our current crop of politicians. If anything, the job of the Church is to demonstrate that politics should have a much wider lens than just the electoral cycle. Welby does sometimes give the impression that he is fiddling about in the details of policy, of using politics as management. But in this, I think he is not being political enough. He is not showing how the political has a properly cosmic dimension.

That said, Christianity is an incarnational religion, and the most materialistic of the world’s religious traditions. While these lumpy parcels of meat that we inhabit require physical care — hence the need for small ‘p’ politics — we are also beings who often set our lives in the context of something far greater than that afforded by the sell-by date of our physicality. There is a kind of politics that pertains here too – of the sort of beings we understand ourselves to be, of our greater moral and spiritual aspirations. So, to say that all human beings are made in the “image and likeness of God” is to make a big ‘P’ political claim. This is, among other things, a no borders kind of claim. Everyone, whatever their documentation, is stamped with God’s likeness, and as such, should illicit in us a reverence and certain solidarity. Yes, bishops should tread wearily in making too many small ‘p’ political claims. But big picture politics is their natural territory — and long may they inhabit it.