“Not yet a human” was written in capital letters on her tummy. The message was clear. Human life begins at birth. Only then does what exists within her become the bearer of its own set of rights. Until then, the rights that are attendant upon being a human being are hers and hers alone. The criteria for being a human being are rooted in values like independence and rationality, often understood as consciousness.

Others reference a very different set of values. On the Tube, the woman opposite me wears the pin badge “baby on board”, an invitation to treat her carefully, perhaps to give up my seat if the carriage is busy. Like many people, I do. And by doing so, I acknowledge that “baby on board” has some sort of moral call upon us, a call to treat her in a certain way in virtue of the baby that she is carrying. Two women; two very different moral messages.

Those who locate the beginnings of human life with conception or with birth — and at all points between — are making a moral decision not a biological one. Often, they do not disagree upon the scientific facts at all. They just disagree which of these facts are morally relevant.

I had wanted to write about abortion without saying what I thought about it morally. But that is probably impossible. I do not have a clear and definitive idea of when a human life becomes a human life. I have a sense that something emerges over time, with an increasing moral call upon us to treat this body of cells as something more than inert matter. Which is why abortion shortly after conception does feel morally different to later terminations. But the law requires a definite line. Rights is a legal term and requires legal precision.

Other moral approaches have the capacity to be more nuanced. So it is perfectly possible that one may affirm the right to have an abortion without maintaining that it is morally unquestionable. I am somewhere here. To agree with Bill Clinton that abortion should be “legal, safe and rare” is to acknowledge — to insist upon — the right as well as to maintain that there is something about it that should be “rare”. 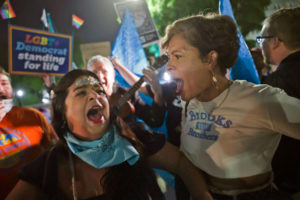 Rights and morality do not always perfectly track each other. This is why, if you ask me about rights, I am instinctively more pro-choice, and if you ask me a moral type of question, I am less so. Rights are not capable of doing all the moral work that we want them to.

But there are other implications to the question of what constitutes human life. For if we take independence and consciousness as the most important concepts for what it means to be human, we are faced with the question of what to do when these concepts can be replicated artificially. What if robots, for instance, supported by some advanced artificial intelligence, meet these criteria for being human?

After all, they may indeed display independence and something remarkably close to consciousness — which is why academics are already writing about the need for robot rights. This seems to me to be crazy: I think of robots as having no more claim to my moral concern than toasters do. Yet if we subscribe to a set of beliefs of what it is to be human that can be generated artificially, then we are not far from thinking robots to be “more human” than, say, a brain-dead person on a life support machine. Or indeed a foetus.

Back in 2017, the government of Saudi Arabia bestowed citizenship — and thus legal personhood — on Sophia, a robot. It was a marketing gimmick, of course. As many pointed out, this appeared to grant a robot more rights than half of the people living in that country: there was something profoundly disturbing about granting a glorified toaster more of a legal claim to personhood than many of the women living under that despotic regime. Examples like this make me think there was greater wisdom in the idea of humanity being the bearer of a soul than in the current belief that it has to do with higher consciousness and the capacity for independent living.

The Left killed the pro-choice coalition

Religion is much disparaged in the abortion debate, and I understand why. The denial of abortion rights to those who have become pregnant through rape or incest is cruel and heartless. Christianity is supposed to be “good news” — but how can forcing an unwanted pregnancy be “good news” for a woman? Yet if we defend women’s rights in such a way that a minus-one-day-old baby less human than a toaster, then we are all in terrible trouble. “Not yet a human” is a dangerous slogan, especially when we start to think about how its criteria for being might be rolled out — or denied — to others in very different circumstances, such as the seriously ill. “Not yet a human” is perilously close to the statement “No longer a human”.

We used to think the essence of human life was to be in possession of a soul, something ineffable and God-given. It wasn’t so much a question of reasoning from mental capacity to humanity, more an attitudinal statement about how our lumpy flesh ought to be venerated as ultimately precious, as opposed to merely being a thing. There is much to be said for this approach, but in a more empirically minded age, the fact that we could not see it or weigh it made the soul intellectually suspect. So now we are more likely to think in terms of the brain and brain development.

The point about the religious attitude is that it insists that human life is not fungible, not fully replaceable with something that may share all of its outward characteristics. I absolutely believe in a woman’s right to choose. I do not believe in anyone’s right to deny the humanity of another. But we must not defend the former by insisting upon the latter. “Not yet a human” will always be a terrifying phrase.