Reading the mainstream media, one would be forgiven for believing that the upcoming midterms are part of a Manichaean struggle for the soul of democracy, pitting righteous progressives against the authoritarian “ultra-MAGA” hordes. The truth is nothing of the sort. Even today, the vast majority of Americans are moderate and pragmatic, with fewer than 20% combined for those identifying as either “very conservative” or “very liberal”. The apocalyptic ideological struggle envisioned by the country’s elites has little to do with how most Americans actually live and think. For most people, it is not ideology but the powerful forces of class, race, and geography that determine their political allegiances — and how they will vote come November.

Of course, it is the business of both party elites — and their media allies — to make the country seem more divided than it is. To avoid talking about the lousy economy, Democrats have sought to make the election about abortion and the alleged “threat to democracy” posed by “extremist” Republicans. But recent polls suggest that voters are still more concerned with economic issues than abortion. The warnings about extremism, meanwhile, are tough to take seriously, given that Democrats spent some $53 million to boost far-Right candidates in Republican primaries.

Republicans are contributing to the problem in their own way, too. Rather than offering any substantive governing vision of their own, they assume that voters will be repelled by unpopular progressive policies such as defunding the police, encouraging nearly unlimited illegal immigration, and promoting sexual and gender “fluidity” to schoolchildren. They ignore, of course, the fact that their own embrace of fundamentalist morality on abortion is also widely rejected by the populace. And even Right-leaning voters may doubt the sanity of some of the GOP’s eccentric candidates this November.

In short, both major parties stoke polarisation, the primary beneficiaries of which are those parties’ own political machines. But most Americans broadly want the same things: safety, economic security, a post-pandemic return to normalcy, and an end to dependence on China. Their divisions are based not so much on ideology but on the real circumstances of their everyday life.

The most critical, yet least appreciated, of these circumstances is class. America has long been celebrated as the “land of opportunity”, yet for working and middle-class people in particular, opportunity is increasingly to come by. With inflation elevated and a recession seemingly on the horizon, pocketbook issues are likely to become even more important in the coming months. According to a NBC News poll, for instance, nearly two-thirds of Americans say their pay check is falling behind the cost of living, and the Republicans hold a 19-point advantage over the Democrats on the economy. A downturn could also benefit the Left eventually. As the American Prospect points out, proletarianised members of the middle class are increasingly shopping at the dollar stores that formerly served working and welfare populations. Labour, a critical component of the Democratic coalition, could be on the verge of a generational surge, with unionisation spreading to fast food retailers, Amazon warehouses, and Starbucks.

To take advantage of a resurgent labour movement, however, Democrats will have to move away from what Democratic strategist James Carville scathingly calls  “faculty lounge politics”: namely, their obsession with gender, race, and especially climate. For instance, by demanding “net zero” emissions on a tight deadline, without developing the natural gas and nuclear production needed to meet the country’s energy needs, progressives run the risk of inadvertently undermining the American economy. Ill-advised green policies will be particularly devastating for the once heavily Democratic workers involved in material production sectors like energy, agriculture, manufacturing, warehousing, and logistics.

To win in the coming election and beyond, Democrats need to focus instead on basic economic concerns such as higher wages, affordable housing, and improved education. They also need to address the roughly half of all small businesses reporting that inflation could force them into bankruptcy. Some progressives believe that climate change will doom the Republicans, but this is wishful thinking. According to Gallup, barely 3% of voters name environmental issues as their top concern.

Racial divides are also important — though not in the way that media hysterics about “white supremacy” would lead you to believe. Florida Governor Ron DeSantis’s decision to fly undocumented immigrants to Martha’s Vineyard was undoubtedly a political stunt, and one arguably in poor taste. But it succeeded in its main goal: highlighting the enormous divide between the border states affected by illegal immigration and the bastions of white progressivism who tend to favour it. 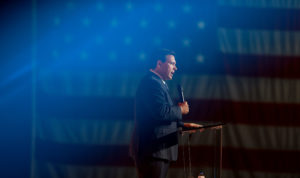 Under Biden, the Democrats have essentially embraced “open borders” — illegal crossings are at record levels, and few of the migrants who make it across the border are ever required to leave. This policy reflects a deep-seated belief among elite Democrats that a more diverse, less white population works to their political favour. Whether they are right to think so, however, is far from clear. Black people still overwhelmingly back the Democrats, but Asians (the fastest-growing minority) and Latinos (the largest) are more evenly divided, and have been drifting toward the Republicans in recent years.

Here, too, class is a key factor. Many middle and upper-class minorities are on board with the Democrats’ anti-racist agenda. But many working-class Hispanics and Asians have more basic concerns. After all,  notes former Democratic Strategist Ruy Teixiera, these are the people most affected by inflation, rising crime, poor schools, and threats to their livelihoods posed by draconian green policies.

Culture too plays a role. Immigrants, according to one recent survey, are twice as conservative in their social views than the general public and much more so than second generation populations of their own ethnicity. Like most Americans, they largely reject the identity politics central to the current Democratic belief system. Immigrants and other minorities also tend to be both more religious than whites; new sex education standards have provoked opposition from the Latino, Asian, African American and Muslim communities.

The twilight of the Disney princess

The final dividing line is geography, always a critical factor in American politics. For decades, the country seemed to become dominated by the great metropolitan areas of the coasts, with their tech and finance-led economies. But even before the pandemic, the coastal centres were losing their demographic and economic momentum and seeing their political influence fade. In 1960, for example, New York boasted more electoral votes than Texas and Florida combined. Today, both have more electoral votes than the Empire State. Last year, New York, California, and Illinois lost more people to outmigration than any other states. The greatest gains were in Florida, Texas, Arizona, and North Carolina. These states are high-growth, fertile, and lean toward the GOP.

The twilight of the Disney princess

Likewise, regional trends suggest that elections will be decided in lower density areas; suburbs alone are  home to at least 40% of all House seats. Some of these voters may be refugees from blue areas who still favour the Democrats. But lower-density areas, which also tend to have the highest fertility rates, tend to be dominated by family concerns like inflation, public education and safety, issues that for now favour Republicans.

Put the battle between Good and Evil to one side. It is these three factors — class, race, geography — that will shape the outcome of the midterms, whatever the media says. The endless kabuki theatre pitting Trump and his minions against Democrats may delight and enrage America’s elites — but for the American people, it is still material concerns that matter.