In the bowels of Westminster, if reports are to be believed, you can hear the constant rumbling of letters of no confidence being submitted to Graham Brady. At least a dozen Tory MPs have gone public with their desire to replace Boris Johnson; the national press is peppered with quotes from anonymous colleagues doing the same. Just yesterday, his policy chief of 14 years walked out, describing his behaviour as “scurrilous“.

And yet despite this growing resentment, despite the fact that a majority of voters want him to resign, there’s every chance that Johnson will cling on. Yes, if the Met Police’s soon-to-be-published report on his alleged Covid breaches reveals that he misled parliament or lied to his own backbenchers, he is probably toast. But if it gives him enough wriggle room to survive, it will take the wind out of his rivals’ sails — and the PM will live to fight another day, and another election.

On that score, things aren’t quite as a bad as they first seem for Johnson — especially when you compare his position in the polls to Keir Starmer’s: 46% of people trust neither Johnson nor Starmer to tell the truth; 26% trust Starmer more than Johnson; and 14% trust Johnson more than Starmer. Of course, there is still a gap. But even immediately after the 2019 general election, Johnson had a net-negative trustworthy rating. Nobody voted for Johnson because they thought he was an honest politician. His dishonesty is priced in.

Similarly, voters are not overwhelmingly convinced that ditching Johnson would help the Tories: 34% think the Tories would be better off without him, compared to 48% who believe they would be doing the same or worse. Among Conservative voters in 2019, those figures are 23% and 66% respectively. Nor are voters warming to Starmer — just one poll this year has given him a net-positive approval rating. IpsosMORI, who remove the “neither” option in their satisfied/dissatisfied question, find a -15% satisfied rating for Starmer.

What about the latest YouGov poll, which gives Labour a six-point lead and finds that Starmer’s party is keeping 65% of its 2019 vote, versus just 52% for the Tories? Well, it’s worth noting that 25% of 2019 Tory voters say they “don’t know” who they’d vote for, compared to just 11% of Labour voters. This is important — “don’t knows” are excluded from headline voting intention figures, so the Conservatives could be in a stronger position than we think. One pollster which does not do this is Kantar; since the North Shropshire by-election they have, on average, found the Conservatives to be 2 points higher than other pollsters (and Labour nearly 1.7 points lower). So, if Boris is in a stronger position than we think, how should he use it to his advantage?

Since 2019, political scientists have largely responded to this question by wheeling out hackneyed truisms about mystical Red Wall voters. These voters, we’re told, are a unique fighting force, chomping at the bit to fight Johnson’s culture war. But that’s a myth; they are not more anti-woke than Tory voters in general, nor do they differ significantly on economics.

Indeed, the original purpose of the ‘Red Wall’ moniker was that it represented seats which, given their socio-demographic make up, should have voted Tory anyway. The question was not why these seats turned Conservative in 2019 — it was why they were not Conservative long before 2019.

If he’s to succeed, Johnson needs to remember what this Conservative voting coalition cares about. At the last election, Brexit was the most important issue for voters, leave and remain. Now, only 15% of leave voters think it is one of the top three most important issues; for Remainers, that figure is 32%. Brexit will not deliver the next election for Boris — but playing on traditional Tory strengths might.

Nowhere, for instance, is the divide between Tory and Labour voters starker than in the issue of immigration and asylum. For Tory voters it is the third most important issue (at 46%), whereas for Labour it is ninth (at 8%). You would struggle to find any voter who thinks the government is doing a good job on asylum seekers crossing the Channel — even 77% of Conservative voters thinking the government has handled it badly. So if Johnson wants to shore up his Tory base, a good place to start would be putting Home Secretary Priti Patel on notice: stop the boats or lose your job.

Then there’s the economy, which is rated one of the top three issues by 55% of Tory voters, compared to 45% of Labour voters. Johnson’s coalition is sceptical of how the economic system is structured: while they do not necessarily believe in income redistribution, they do think the system is rigged in favour of the rich, and that ordinary working people do not get their fair share. Generally speaking, Conservative voters are much more Left-wing than Conservative MPs. 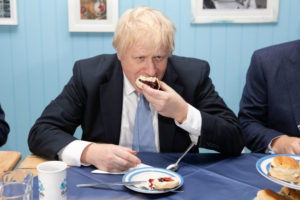 So perhaps more than anything, the most pressing concern for Johnson should be levelling up. After “getting Brexit done”, levelling up formed the core of the Conservatives’ offer to the electorate. Yet it took more than two years for the government to get around to defining exactly what it means, let alone release a white paper on the subject.

It’s hardly surprising that voters are not convinced: 44% think levelling up will lead to no change in spending in their area, while 18% think it will lead to lower levels. Just 7% think more money will flow as a result. The figures are broadly the same among Tory and Labour voters.

One reason for New Labour’s landslide victory in 1997 was that the public wanted more money spent on public services — 18 years of Thatcherism had left them in a perilous state. Cameronite austerity has done the same today: all the signs suggest that voters want to see a difference by the end of this parliament, otherwise they will lose faith in the government’s promises.

Despite this, the Government is caught up in arguments over funding between the Secretary of State for Levelling Up, Michael Gove, who wants more money, and the Chancellor, Rishi Sunak, who is saying no. But levelling up — undoing decades’ worth of inequality — cannot be done on the cheap.

For Johnson, there is an obvious solution to this. If levelling up is to be his legacy, it is currently under threat from Sunak’s penny-pinching instincts. So a true government reset — one that would send a clear signal to voters about his commitment to ending the North/South divide — would see Johnson sack Sunak and replace him with a true believer in levelling up: someone like Michael Gove. Sunak’s much-touted popularity may make Johnson think twice about this, but support for the chancellor is overstated. It is, after all, difficult to be anything but popular when you’re paying people to stay at home, or subsidising their dinners out in the middle of summer. But since the rush of cash has disappeared, his approval rating has begun to fall — from a net 43% positive in April 2020 to just 2% in December 2021.

If Johnson survives the consequences of the Met’s report, he will probably live to fight the next election. By then Partygate will have faded and the PM will need to point to a series of policy wins that his voter coalition wants: most of which involve spending more money. Now is not the time for a self-declared fiscal conservative to sit in Number 11. If Johnson wants to win in 2024, he needs to put voters’ money where his mouth is.