Why do some people take a peep at the last few pages of a novel first? Yes, we know it’s cheating. But forget whether a cheeky glance at the ending constitutes a great crime against reading — why do many of us instinctively feel that the end contains some sort of privileged information? After all, the juiciest bits often tend to occur in the middle of the book.

Surely the answer is something like this: we look to the end to make sense of the whole. This is where things come together, or not. Where the point is revealed, where some sort of unity is achieved or isn’t. The end gives the story its meaning. Significantly, the word “end” can mean both last things and purpose.

As with novels, so too with human lives. We are story-seeking animals. Even in a post-Christian society, we retain some residual sense that how we end — how we die — contains a special significance for the meaning of our lives as a whole. And this is why there is something especially disturbing about the findings of a Lancet Commission report published this week, that argues we have over-medicalised death and have lost a sense of what a good one might look like.

Imagine if we were to take a look at the last few pages of the book of our lives. There we are, in a huge hospital, surrounded by masked medics and machines. We are not doing very much because we are all doped up. And due to Covid, not even in the presence of our loved ones. The ending is one of medical failure. “This situation has further fuelled the fear of death, reinforcing the idea of health-care services as the custodians of death,” says the report.

We die when the experts “cannot do any more”. It’s not much of an ending. This is not a criticism of the people we have tasked with keeping us alive. But more a question about what it is to live without a narrative sense of our own ending. For without some hermeneutic rhythm of beginning and end, our lives — like Arnold Toynbee’s view of history — are “just one damn fact after another”. There is no conclusion, no purpose, no narrative arc; just a succession of inconsequential events with our death having no more or less meaning than any other event. The contrast with the religious worldview couldn’t be stronger.

Yesterday was the feast of Candlemas, the last day of the Christmas season. Jesus is taken into the Jerusalem temple as a child and an elderly Jewish gentleman recognises Him to be the promised Messiah, the light of the world. “Lord, now lettest thou thy servant depart in peace, according to thy word,” he exclaims, words that get sung as the Nunc Dimittis every day in churches and Cathedrals up and down the land. Or, in less floral language — I have seen what I wanted to see and I can now die happy.

Christmas, the celebration of a birth, ends with the anticipation of a death. Not just that of Simeon, but also of the child himself. “And a sword will pierce your own heart too,” Simeon tells Mary darkly, a reference to the agony she will experience when she watches her child – and He will always be her child – die in agony, executed by the Romans.

I have been taking funerals for 30 years, and they all have concluded with Simeon’s words. Earlier this week, I used them at the bedside of a parishioner to whom I gave the last rites. The promise they hold out is of a life that reaches some sort of conclusion, where the threads of our story come together.

For those of us who are religious, this narrative arc is curated through a wider cosmic narrative in which human lives conclude in a return to the loving embrace of the Almighty. Across the West, these meta-narratives are mostly forgotten or have been deliberately abandoned. Life is now “one damn fact after another”. Death is of no more narrative significance than any other moment in time.

If you ask people how they want to die, they often say quickly and in their sleep. It is as if they don’t want to be aware of death as something that happens to them. And those at the bedside — if they are lucky enough to be able to be there — can sometimes co-operate with this sense of denial with well-meaning words of getting better, “you will be up on your feet in no time” and so on.

In this world, the book doesn’t have an acknowledged ending. From a religious perspective this all feels a little ironic. We are often told we are the fantasists about death, pretending it doesn’t happen with all that talk of everlasting life. 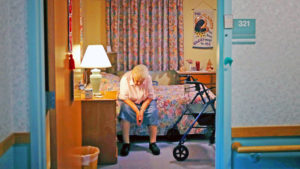 Why wait to die?

At the bedside, priests often talk about death to those who are saying their goodbyes. And equally often, they are obstructed from doing so by family members who maintain it isn’t going to happen. Even at funerals, we are sometimes instructed to wear brightly coloured clothes, and to celebrate a life rather than mourn a death.

Atheists will say that we all need to face the fact that, ultimately, we are nothing more or less than food for worms and daffodils. That eternal life is a fantasy designed to give the clergy some sort of control over people’s lives. Auguste Comte said that the afterlife produced “slaves of God”. But atheism has arguably made us less able to talk about death, not knowing how it fits into the story of our lives. Instead of bravely facing death, too often the secular world ducks it.

When I die, don’t you dare come in a bright jumper. I want a church full of Sophia Loren look-a-likes under their black veils bawling their eyes out. These days, it is often secular death that refuses to think of death as real.

“How people die has changed dramatically over the last 60 years” writes Dr Libby Sallnow, co-chair of the Lancet commission and a palliative care consultant, “from a family event with occasional medical support, to a medical event with limited family support. A fundamental re-think is needed.”

The death of Britain’s dignity

It is no coincidence that the 60 years the good doctor refers to here is roughly the time scale of what we might call contemporary liberalism (older, better versions are available) — that is, the rise of autonomy and self-determination as the ultimate matrix of moral value. I suspect that part of the reason we have become so inarticulate about death is not about increasing squeamishness. Our society has been reconstructed around the centrality of the “I”. The moral priority of individual choice has nowhere to go with death, something we mostly do not chose, and something that represents the absolute obliteration of this ever demanding “I”.

The great archbishop William Temple once wrote that the true aim of all religion is to “transfer the centre of interest from self to God”. When you centre your life on something that is more important than you, then your own death ceases to be the destruction of all you care about. The message of most religions is simply: “it’s not all about you”; it is a message both of challenge to the nagging demands of the ego and yet one of ultimate hope.

This is the very opposite of the liberal worldview, that predicates value upon the making of individual choices, and has no sense of what a decentred self might look like. In other words, contemporary liberalism has no way of looking death in the face, no way of answering it back with the words “where is your sting?”, no way of singing the Nunc Dimittis. No wonder we are all so afraid.