Fifty years ago, the world was put on notice that infinite economic expansion on a finite planet is a recipe for disaster. It came in the form of The Limits to Growth. It wasn’t our only warning. During the heady decades of the Sixties and Seventies, plenty of scientists and scholars explored the ways in which industrial civilisation was backing itself into a corner. But The Limits to Growth defined the high-water mark of that tide of belated common sense — the point at which we came closest to evading the noose that is now tightening around humanity’s neck.

The volume was the result of a research project funded by the Club of Rome and carried out at MIT, which at the time had some of the world’s most sophisticated computers. It was translated into 30 languages and sold somewhere in excess of 30 million copies. Robert C. Townsend, author of the then-famous book Up the Organization, summed up the general reaction in a neat sentence: “If this book doesn’t blow everybody’s mind who can read without moving his lips, then the earth is kaput.”

Of course there was pushback. Within days of its publication, articles denouncing its conclusions started popping up in the media. Books followed, claiming to prove that there was nothing to worry about and infinite growth really could continue forever. Two things made the pushback fascinating to students of human folly. The first is that it so systematically misstated everything that the scientists behind The Limits to Growth were saying. The second was that it succeeded in drowning out what the scientists were saying and replacing it with a caricature that was easy to dismiss.

The same caricature remains glued in place today. Listen to defenders of the conventional wisdom, and you’ll find any number of supposedly serious thinkers insisting that The Limits to Growth claimed that the world would run out of petroleum by the end of the 20th century, or that some other catastrophe would arrive long before now.

It requires no more than a casual reading of the book to discover that these statements are quite simply wrong: The Limits to Growth said no such thing. Yet the lie continues to circulate, because it makes it easier for most of us to avoid asking hard questions about the future of the industrial world. How we lost the future

It is thus worth taking a moment to understand exactly what the book was trying to say. To begin with, it wasn’t offering predictions. It was exploring principles. The World3 computer model used to generate the famous graphs went through dozens of different runs, each with its own set of initial assumptions. The goal of the project was to show how the complex system we call human industrial civilisation unfolds over time. It showed that two crucial factors, both of which behave in counterintuitive ways, set the stage for disaster.

The first of these is exponential growth. Most people have encountered the old story about the Indian sage who challenged a king to a game of chess and asked for a simple gift if he won: one grain of rice for the first square on the board, two for the second, four for the third, and so on through all 64 squares, with each square getting double the number of rice grains as the one before it.

When the king lost the game, he discovered that he had offered the sage an impossible boon: the total amount of rice he owed the sage amounted to more than 210 billion tonnes, enough to cover the entire nation of India with a meter-thick layer of rice.

Most people, when they encounter this story, insist that there has to be something wrong with the maths — that there’s no way a mere 64 doublings could amount to that much rice. There’s something wrong, all right, but it’s not the maths. The human mind instinctively imagines growth in linear rather than exponential terms. There’s probably good evolutionary reason for that — in the world our tribal ancestors inhabited for all those millennia, linear growth was the rule and exponential growth the almost unheard-of exception. But it’s a lethal liability now, when technology has unleashed a whole cascade of exponential growth curves that our minds can’t even begin to grasp without a serious struggle.

That’s one of the two crucial issues that The Limits to Growth anatomised. The other is the impact of delaying factors on the ability of human societies to adjust to change. To borrow a helpful analogy from the book, one of the things that drivers have to take into account is the delay between when they see a problem in the road ahead and when the car can respond to it. That’s why good drivers slow down when visibility is low, or when they are driving in residential neighbourhoods where a child might dart out into the street without warning. The bigger the vehicle is and the faster it’s moving, the more time it takes to swerve or stop. Delaying factors play an equally challenging role in steering or braking modern industrial civilisation, the biggest and fastest vehicle of all. Anthropogenic climate change makes a good example. Billions of tonnes of heat-trapping greenhouse gases were dumped into the atmosphere from smokestacks and car exhausts before anyone noticed that the planet was warming and climate belts were shifting unpredictably. Most of the climate impacts of the pollution already absorbed by the atmosphere have not yet happened, since the sheer mass of atmosphere and oceans imposes a big delaying factor on them.

In other words, even if we slammed on the brakes now, skidding to a halt is going to take a while — and since it’s still politically possible to ignore the consequences, most nations are still paying lip service to the climate change crisis and continuing to burn fossil fuels as though there’s no tomorrow.

In the real world, exponential growth leads to crisis far sooner than our intuitive models lead us to expect. In the real world, delaying factors make it a lethal mistake to wait until crisis arrives before enacting countermeasures. Combine those two principles and you end up with a stark warning of impending trouble— and that’s exactly what The Limits to Growth provided.

The warning, as we all know, was not heeded in any meaningful way. Talking heads pontificated for a few years, before other topics seized the collective imagination of the chattering classes, and the environmental movement struggled on gamely for another decade or so, before selling out to moneyed interests and turning into yet another set of slick corporate enablers. Most people dismissed the environmental prophecies of the Seventies out of hand, and embraced the conviction that the danger was past because it had not yet arrived. Meanwhile every variable tracked by the MIT study did exactly what the World3 model predicted it would, setting us up for our present predicament.

The close fit between the model and the reality didn’t quite go unnoticed. In 2000, investment guru Matthew R. Simmons published a paper titled “Revisiting The Limits to Growth: Could The Club of Rome Have Been Correct, After All?” Simmons assessed the predictions from the MIT study, compared them to nearly three decades of evidence, and pointed out that the World3 model stood up much better than the predictions of its critics: “For a work that has been derisively attacked by so many energy economists, a group whose own forecasting record has not stood the test of time very well, there was nothing that I could find in the book which has so far been even vaguely invalidated.” 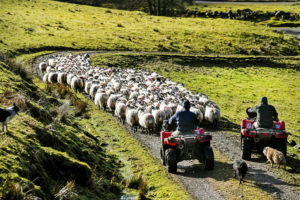 Why I am fleeing to the hills

In 2014, a study published by researchers at the University of Melbourne in Australia, headed by Graham Turner, factored in another decade and a half of data and got the same results. Last year, in turn, a study by Gaya Herrington compared the World3 model with empirical data and once again found the model to be impressively accurate. Did any of these findings influence public policy, or even start to clear away the fog of misinformation that surrounds The Limits to Growth half a century after its publication? Not to any extent that matters.

“If the present growth trends in world population, industrialisation, pollution, food production, and resource depletion continue unchanged, the limits to growth on this planet will be reached sometime within the next one hundred years. The most probable result will be a rather sudden and uncontrollable decline in both population and industrial capacity.”

The growth trends of 1972 did in fact continue unchanged, and so here we are.

In most of the World3 runs that assumed realistic resource limits and unaltered public attitudes, crunch time arrives sometime around 2015-2030. That’s when pollution begins to cause significant global disruptions, global food supply falters, global industrial output starts a prolonged contraction, and global population peaks and begins to decline as well. If this doesn’t sound familiar, you might want to get out more often. Vasectomies won’t save the planet

It’s crucial here to avoid that bizarre astigmatism of the imagination that convinces so many people nowadays that the only possible alternative to business as usual is apocalyptic collapse. Most of the World3 runs, including the ones that match the real world most closely, don’t predict collapse. They predict decline. That’s the future The Limits to Growth traces out ahead of us: a long era of unstoppable contraction in which the exponential growth of the last two centuries or so slams into reverse, and global population and industrial output contract steadily, year after year and decade after decade, until these and other variables finally reach a level that can be sustained over the long term.

From within the conventional wisdom of our time, that long arc of decline is unthinkable. That’s why the warning of The Limits to Growth went unheeded. What too few people were willing to consider back in 1972 is that the future is under no obligation to behave in thinkable ways. Now that the limits to growth are rising up all around us, as global population peaks, industrial output falters, the point at which crisis can be averted is long past. All we can do is try to brace ourselves for a future that will leave the fake certainties of our age in tatters.