What are processions for? Last Thursday evening, around a thousand people of all ages gathered in my local market square, and processed across the playing fields to light a beacon in honour of the Platinum Jubilee. My daughter was near the front, in her Rainbows uniform, and took a turn carrying the flag for her troop.

In premodern England, processions were mostly connected to the liturgical calendar: events often both celebratory and of deep moral significance, marking saints’ days and Holy Week, accompanied with chanting, song or enactment of Bible stories. Perhaps the first monarch to use public spectacle as a political tool was our reigning Queen’s namesake, Elizabeth I, whose annual Queen’s Progress would see her take the whole court on the road over the summer, passing slowly and in great splendour through every part of her kingdom, where her subjects would put on pageants and feasts in her honour. She embarked on 23 in her 44 years as Queen, extending the glamour of her reign well beyond the narrow circle of her immediate court.

But what does a procession mean in the 21st Century? And who is it for? If Elizabeth I used pageantry to project her image and soft political power across her kingdom, the time between her reign and the arrival of her namesake, Elizabeth II, has delivered technologies that — in theory at least — render such efforts obsolete.

What’s the point of taking your entire court on the road, at vast effort and expense, when you can broadcast images of yourself everywhere with little to no effort? Meanwhile, for participants, the idea that your procession is being watched by journalists or TV cameras gives it a whole different set of meanings and potentials. No longer something you do with the other participants, it becomes something you do for an imagined audience, and whose meaning is outside the event itself.

If that sounds abstract, think about the idea of “peaceful protest”. This has been extensively used by progressive movements throughout the 20th Century, to effect political change with minimal violence by inspiring public sympathy for a cause. The Indian independence campaigner Mahatma Gandhi was a trailblazer in the format: between March and April 1930, he led a 240-mile march across India to collect salt from the coast, in protest against the 1882 Salt Act, a British colonial law which prohibited Indians from gathering or selling salt.

Gandhi was joined by thousands of his fellow-countrymen, some 60,000 of whom were arrested for their involvment. The march helped tilt public sympathy in favour of independence both on the subcontinent and – via newspaper reports – elsewhere in the world, and contributed to the movement for independence that came to fruition in 1948, four years before our reigning Elizabeth was crowned. Barely over a decade after that coronation, in 1963, Martin Luther King led some 250,000 sympathisers in another historic political procession in Washington, this time for racial equality: the scene of his “I Have A Dream” speech. 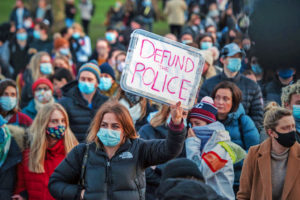 Women rebels without a cause

Both these peaceful mass protests changed the course of history. But their political force relied on the presence of journalists to report on them. Before the mass-media age – that is, well into the 18th Century – any crowd of people with a political grievance was less likely to be treated as a noble political protest than as an incipient riot, not least because in most cases that’s what it was. The 1381 Peasants’ Revolt didn’t sit about with placards waiting for the world to sympathise with their dislike of wage caps and the poll tax. They marched on London, where they massacred Flemish merchants and demolished John O’Gaunt’s palace.

By the same token, who cares about some people walking 240 miles to get salt, unless the world at large reads about it in the papers and understands the symbolic meaning? And as for 250,000 people gathering near the seat of government in a country of (then) 189 million people, unless the press is there to record the stirring speeches and report on its orderliness, that’s not a peaceful protest, it’s merely a public order problem. As it was, these events proved pivotal at a time when mass media was becoming increasingly important.

The digital age has changed the calculus again, though. On social media platforms such as Twitter and Instagram, you can get a sense of which ideas, causes or moods are swirling across the collective consciousness by seeing which hashtags are popular. Meanwhile, protests like those led by Gandhi and King have increasingly given way to something more nebulous and feel-good: the physical manifestation of a trending hashtag.

These such events may gesture at concrete political change but (like the clicktivism they mirror) often land instead on something far more nebulous: emotional gestures of “standing with” some oppressed group, or “raising awareness” of the most broad-brush issues, with very little in the way of concrete policy attached. 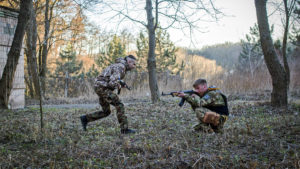 Why Western men gave up on war

In this view, political voice isn’t something individual; it’s weilded collectively, by a swarm. That is: if you want to be heard, you need to make sure the imagined observer can see that there are lots of you. And to achieve that, you have to ensure the hashtag trends, and add your body to the physical swarm of people all gathered in one place to support that cause.

But the trouble with trending-hashtag approach to mass politics is that, much like hashtags themselves, such physical gatherings are markedly less connected with concrete political action than their 20th-Century forebears. Gandhi wanted an independent India; King wanted equal legal standing for all Americans regardless of skin colour. Both achieved their aim. But since the turn of the century and rise of the internet, this has steadily broken down: in 2003, a million Not In My Name marchers did nothing to deter Tony Blair from invading Iraq.

The 2017 Women’s March, meanwhile, took place across some 600 locations and 81 countries – itself impossible without social media – and had an estimated 3.2 million participants in the US alone, making it the largest single-day protest in US history. It was hailed as transformational; but it’s far less clear what the march as a whole was for, let alone what it achieved.

It swiftly became roiled by anti-semitism scandals, and saw participants falling away to more issue-specific campaigning. And if 3.2 million Americans in pink hats marched in outrage at the election of a pussy-grabber to the White House, it appears the weight of their numbers has had little impact on The Donald’s reported determination to have another crack at the US Presidency.

For what might such a swarm campaign do after its collective voice has been heard? This reflects, maybe, the parallel rise of an ecosystem one commentator has called the “NGOcracy”: a body of non-governmental agencies concerned with driving social change, in line with how they have chosen to interpret popular opinion as seen in trending-hashtags. That is: in the digital age the job of mass processions is simply to emote. In defence of the Woke Left

Processing alongside my flag-waving daughter on Thursday evening, though, I found myself wondering: is that all it can be — an emotional pressure-valve for a politically defanged public square whose claim to agency has been colonised by professionalised NGOs? One of the most striking criticisms I saw of the Jubilee celebration seemed to me to map nationwide Jubilee events, large and small, onto this social-media-age paradigm of hashtag activism. Based on the turnout of supporters at the Mall, this commentator suggested, the Queen is not popular nationwide. And, furthermore, anyone who really cared about the monarchy could easily make the journey into London to add their body to this single swarm in the Queen’s honour.

Implicitly, in this view, none of the local processions was meaningful unless it added to the royalist body-count visible in drone footage of Central London. But does this make sense? I struggle to imagine another cause that could turn out a thousand small-town citizens of Bedfordshire, of all ages, after dinner on a Thursday night. I also know that other processions of a similar kind took place all over the country. I imagine very few of them were filmed by drone, so their body-count couldn’t be evaluated by media commentators for trending-hashtag status.

Does it follow that each of these events was meaningless? Only if you believe that the value of a gathering, event or procession lies in its ability to make a contribution to the trending-hashtag emotional life of the nation as a whole. But what I found hopeful and heart-warming about my modest local celebration was the reminder that great swathes of the country really don’t care much about what’s happening on the internet. 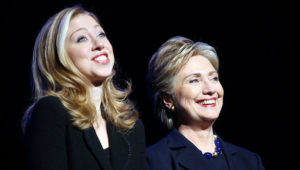 For Clinton feminists, not all women are equal

For me this was salutary. Especially in the face of in-person interactions mostly banned or tightly constrained during lockdown, and ever more of our public life accordingly forced online, it can feel difficult to escape an increasingly noisy, divisive and overheated digital public discourse. And it’s this discourse that prefers to emote en masse, whether online or in the real world, via the kind of hashtag-protest we saw in the Women’s March. Last Thursday reminded me that away from all the shouting, plenty of communities still gather with and for one another, and with only the faintest of nods to the noisy and increasingly self-absorbed parallel universe of digital-era mass politics.

It’s too early to tell whether such events will persist once Her Majesty is gone, and with her, our last national tether to the 20th Century. As for those ritual moments of collective moral communion that are all we have left of the political protests of yore, perhaps we need to stop thinking of them as protests. Instead, we can call them what they are: liturgical events more akin to the medieval processions that pre-dated Elizabeth I than anything between her age and Tony Blair. Religious gatherings, in praise of new (or perhaps long-forgotten) gods whose outlines we’re only just starting to discern.