I’ve seen everything on my A&E ward: from staff, police officers and members of the public being punched to full-on brawls breaking out. Even visibly pregnant staff are not immune to aggression. And that’s just in a fortnight: people don’t realise how dangerous it is to work in a hospital. As a consultant in a Midlands A&E department, I routinely receive reports that staff have been harangued, spat at, racially abused or physically assaulted. One staff survey reported that 14.3% of workers experienced at least one act of physical violence in 2021 — that’s an average of 200 assaults a day. For paramedics, it’s even worse: 31.4% of those interviewed said they have experienced violent attacks.

The correlation between alcohol and violence is well-known, and something we contend with on a daily basis in A&E. Handling drunk patients, and their often-volatile friends, is one of the job’s less pleasant challenges. Their perceptions of common decency are warped, their ability to communicate impaired, their behaviour unpredictable. Anger can quickly descend into violence. And when you mix the sick and frail with the intoxicated or inebriated, you create a morbid cocktail.

But it’s not for me to judge my patients’ transgressions or “lifestyle choices”. Whether they are drunk or stoned or high, incurred an injury in a car chase, or fell ill from swallowing a handful of drugs before they were arrested — all this is immaterial from a medic’s point of view, and must not pollute any assessment. There’s one A&E department nearby that saved the lives of two separate patients who had been brought in by the police with serious injuries sustained from fighting. Both were later charged with murder.

Even though I’m pretty accustomed to the risks now, there are still times when I genuinely fear for my own safety. On one occasion, a local criminal with a history of mental health problems confronted me. He had a habit of loudly threatening to commit suicide if he didn’t get to skip the queue — a threat which we had no reason to think was genuine, and which therefore got him nowhere with the staff on duty. When he accosted me, I could see that he was on the verge of hitting me, so I called the police and had him removed. He was twice my size and had that crazed look in his eyes; who knew what he would do? After all, if he didn’t take a swing at me, there’s every chance he could attack a member of my team. Or what if he decided to wait for me in the shadows of the staff car park? I wouldn’t be the first, or last, female doctor to be intimidated on her way home.

And then there are the patients who show up in A&E with weapons. Last week, a police pursuit in Rochdale ended when the suspect’s car collided with another vehicle. Officers detained the man and took him to Fairfield Hospital in Bury for treatment, only to find that he was carrying a gun. According to the Manchester Evening News, “police confirmed that there was never any risk to the public, and the weapon was recovered safely” — a statement that strikes me as, at best, nonsense and, at worst, evidence of a potentially sackable offence. If police officers had properly searched him, they would have found the gun, instead of allowing it onto hospital premises and putting countless lives in harm’s way. It was not an isolated incident. Last year, a clinician in a nearby hospital stumbled across a concealed weapon on a patient who had been brought in by police. Apparently, all hell broke loose. The officer guarding the suspect hit the panic button on his radio, and a team of armed police descended on the patient’s cubicle — much to the distress, no doubt, of other patients.

And it’s worth remembering that untrained, illicit firearms users are as much a risk to themselves as the public. A colleague once treated a young man who had received a gunshot wound to a rather delicate part of his anatomy after a firearm he’d concealed in the waistband of his jeans accidentally went off. (One of the patient’s testicles was rendered redundant.)

But even if external forces and authorities are responsible for bringing potential violence to A&E, the conditions within hospitals serve as a catalyst. Long waiting times, overcrowding, stressed-out patients and relatives, staff shortages: all these factors mean tempers run high. As one nurse who is preparing to strike over pay and conditions told me earlier this week: “Part of our campaign is about safe staffing on wards. The ratio of nurses to patients is out of kilter. This is often why people become aggressive in A&E: because they can’t get seen as we’re so short-staffed.” Nurses feel that they are expected to put up with abusive behaviour because, according to a recent survey, it ​was seen as “just part of the job”. Some described it as “normal” because of the frequency of incidents. 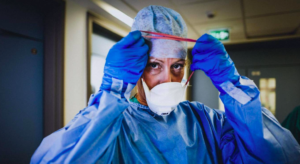 Nurses aren’t the only ones who need better pay and treatment in order to keep patients safe. A&E departments in areas that see a lot of crime also need security staff who are capable of quickly deescalating potentially violent situations. Some hospitals already have this: men with special forces beards, who dress in combat trousers and tactical vests; they look like they are about to carry out a dawn raid with the SAS, not direct Mavis to the disabled parking bay. But these guards are the exception. Those who guard the nation’s emergency departments tend to earn disastrously low wages — and, as the NHS well knows, poor pay attracts poorly trained, unmotivated staff.

These failures trickle down. It shouldn’t need spelling out, but it does: when clinical staff are distracted, abused or assaulted, our capacity to deal with patients is limited, and our departments become less effective. According to The Lancet: “Violence costs the NHS £2.9 billion a year. Indirect costs are much greater, including loss of psychological and social function to the individual, diminished community cohesion, and loss of economic productivity.”

Until the public and the Government realise the immediate, future and generational cost of violence, not just to the healthcare system but to society as a whole, I fear Britain will be paying off a debt it can ill-afford. In the meantime, my staff will continue to look over their shoulders, knowing full well that more tragedies are inevitable.